Redo valve surgery is a challenging intervention for cardiovascular surgeons due to its severe in-hospital morbidity and higher mortality than native valve surgery(1,2). Mitral valve reoperations, especially re-sternotomy and naturally due to previous operations, may expose repeat valve operations to complications due to graft injuries, bleeding, and the presence of adhesions. This may lead to higher complications, especially in patients with vascular structures lying behind the sternum or with a previous history of chest wound infection and radiotherapy(1,2). The most important complication in patients with valve replacement is prosthetic valve dysfunction (PVD) (3). Despite the surgical improvement and increasing success rate of prosthetic valve replacements, several risk factors still pose a challenge for clinician. Therefore, understanding the risk factors affecting short-term or in-hospital mortality after replacing prosthetic valves is vital. Patients undergoing valvular reoperation present with various clinical projections of PVD, including prosthetic valve endocarditis (PVE), obstructive prosthetic valve thrombosis (PVT), obstructive pannus formation, and paravalvular leaks (PVLs)(4-6). There is limited data on redo-valve surgery in our country(1,7). Hence, in the present study, we aimed to investigate these risk factors for in-hospital mortality in patients who underwent isolated redo mitral valve replacement (redo-MVR).

This retrospective study enrolled a total of 103 patients who underwent isolated redo-MVR due to PVDs between February 2011 and January 2021 in our hospital. The preoperative, perioperative, and postoperative data of the patients were retrieved from electronic database of the hospital. Besides, the missing demographic data of the patients were obtained by telephone interview. All patients who had previous isolated mechanical mitral valve surgeries were included in the study. Patients who had an isolated bypass, age < 18, low echocardiographic quality, history of repeated re-replacements (> 2), PVL repair without preoperative and intraoperative TEE examination, isolated congenital surgery or isolated open-heart surgical intervention (of any type) without a valve procedure at their first or later operations were excluded. Patients who underwent isolated redo-MVR other than all these exclusion criteria were included in the study. Moreover, patients who underwent Maze procedure for atrial fibrillation together with isolated redo-MVR were also included in the study. Coronary angiography was performed in all elective patients aged > 40 years, and cardiac catheterization was performed together with cardiac angiography in some of the patients. The flow chart for patient selection is summarized in Figure 1. This study was designed in accordance with the principles of the Declaration of Helsinki and was approved by the local Institutional Review Board (Ethics committee approval number: 2021/12).

All patients were found suitable for general anesthesia after preoperative evaluation. The operation was performed under general anesthesia and a median re-sternotomy was utilized. Mediastinal adhesions were opened and cardiac and great vessels were exposed before systemic heparinization. Surgical intervention was performed using a standard cardiopulmonary bypass technique with central cannulation under moderate degree hypothermia. Myocardial protection was provided with antegrade intermittent or continuous retrograde isothermic blood cardioplegia solution. The previous prosthetic valve was checked and a decision was made for valve replacement. For replacement, previously implanted valve and sutures were removed, the mitral annulus was exposed and interrupted pledgeted sutures with pledgets on the left atrial side were used. Subsequently, a hotshot cardioplegia was delivered and the aortic cross-clamp was removed once the heart started beating. Once all parameters were satisfactory, cardiopulmonary bypass was weaned off and the sternum was closed(12).

Clinical Outcomes and Definition of Complications

The primary outcome measures of the study was in-hospital mortality. Secondary outcomes included individual morbidity rates. Postoperative complications included major bleeding, low cardiac output syndrome (LCOS), tamponade, pleural effusion requiring drainage, sepsis, mediastinitis, pneumonia requiring antibiotic therapy, wound infection, acute kidney injury (AKI) requiring renal replacement therapy, ischemic stroke, heparininduced thrombocytopenia and thrombosis syndrome (HITTs), peripheral embolism, and moderate to severe PVL. Ischemic stroke, in accordance with the latest definition; it was defined as an episode of neurological dysfunction due to cerebral, spinal, or retinal infarction(13). The LCOS was defined as a requirement for inotropic support for > 24 hour(12). Definitions of major bleeding, tamponade, AKI, pleural effusion requiring drainage, sepsis, mediastinitis, pneumonia and wound infection were made according to the latest updated literature and guideline to report morbidity and mortality after heart valve surgery(12,14). Acute peripheral arterial thromboembolism is defined in accordance with the literature(15). The clinical diagnosis of stroke was made by a neurologist. The diagnosis of thromboembolism induced acute limb ischemia was made by an experienced cardiologist or cardiovascular surgeon after detailed evaluation of coronary and peripheral angiographies. 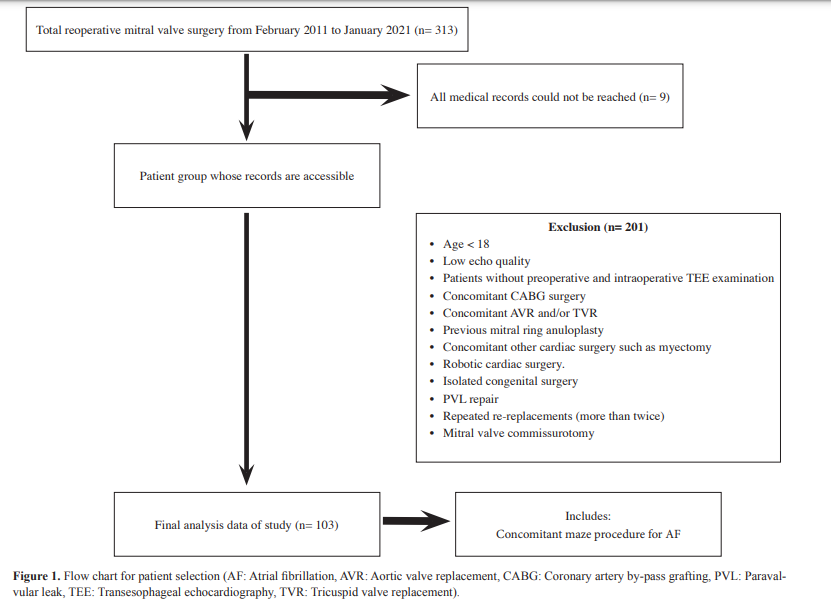 A total of 103 patients (mean age: 50.7 ± 13.4 years; male: 58) who underwent isolated redo-MVR were enrolled in this study. The patients who had previously underwent isolated MVR were selected. On the basis of data obtained from previous hospital records, various types of prothesis were used in various centers in the primary operations [CarboMedics (Austin, TX, USA) in 22, St. Jude (St. Paul, MN, USA) in 59, Sorin (Milan, Italy) in 11, and ATS (Minneapolis, MN, USA) in 10 patients], and most of the leaflets were bileaflet (95.1%). Preoperatively, 36 patients (35%) were in NYHA functional class III/IV, and 67 in class I/II (65%). The mean interval between primary operation and reoperation was 103.3 ± 88.1 months. The most common complaint of the patients at admission was obstruction or HF-related symptoms (80.6%), followed by embolism-related (6.8%) and other complaints. Indications for redo-MVR were PVT in 58 patients (56.3%), PVE in 24 patients (23.3%), PVL in 12 (13.6%), PVD due to obstructive pannus formation in seven (6.8%). Preoperative atrial fibrillation was present in 44 patients (42.7%). The laboratory findings and other demographic features are displayed in Table 1.

Table 1. Comparison of mean scores of HLBS-II between groups
× 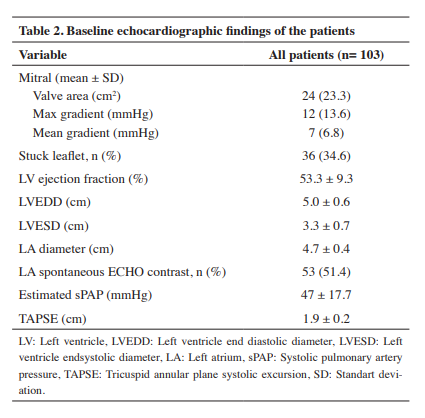 Table 3. Intraoperative and postoperative results of the patients
× 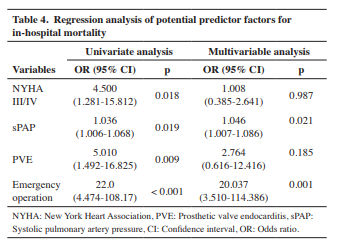 Two major findings of the current study are: I) in-hospital mortality and complication rates in patients who underwent isolated redo-MVR were consistent with the limited data reported in our country, II) sPAP and emergency operation were identified as independent predictors of in-hospital mortality.

In recent years, despite the great improvement in surgical outcomes after reoperations for valve replacement in parallel with technological advances, this type of surgery still poses an ongoing challenge for cardiac surgeons. Therefore, understanding the risk factors that affect operative and inhospital mortality is vital for survival after replacement of prosthetic valves. There may be various indications for redoMVR(1-3,7). In patients with a mechanical valve, reoperation occurs due to valve thrombosis or pannus formation, PVL, and endocarditis(4,7,16,17). Indications for redo-MVR in the present study were mechanical PVDs due to obstructive pannus formation, PVT, PVE and PVL.

Several investigators and different tertiary centers previously reported the clinical results and short and longterm mortality rates of reoperative mitral valve surgery. With advances in surgical technique and perioperative management, the mortality and morbidity risk associated with redo-MVR has decreased(18). As patients continue to survive longer after their initial operation, the need for reoperative surgery is increasing(19). According to a recent review, there was a reported 10% rise per year in the number of redo-MVR from 2002 to 2016(19). As experience with redo-MVR has grown, outcomes have become more favorable. Recent reports suggest that the risk of mortality now ranges from 4% to 11.1%(19,20). However, it is known that low mortality rate and optimal results are obtained in cases of redo-MVR due to bioprosthetic structural valve deterioration. Although there is limited data on this field in our country, the operative and short-term mortality rates have been reported between 6.4% and 15.7%(1,7). In the current study, the in-hospital mortality rate was 12.6%, and this rate may have been affected by the characteristics of more complex cases.

One of the significant mortality predictors of redo valve surgery is emergency operation(7,14,19-21). Rizzoli et al have previously reported that emergent operation was a significant risk factor for early mortality(22). Moreover, Akins et al reported a 2.5-fold increase in mortality risk in patients who underwent non-elective reoperative valve surgery in both aortic and mitral positions(23). Recently, Kilic et al indicated that predictors of the composite outcome of mortality or major morbidity included cardiogenic shock, severe tricuspid regurgitation, urgent or emergent status, and concurrent coronary artery bypass grafting(14). In the present study, emergency reoperation was found to be an independent predictor of in-hospital mortality.

High sPAP is a clinical and hemodynamic syndrome, usually caused by left-sided heart diseases(24). In the current study, high sPAP was associated with 3-month mortality. This finding has been previously described in several papers regarding redo valve or mitral regurgitation surgery(24,25).

This study has several limitations. First of all, this was a retrospective study and enrolled a relatively small patient population. Second, postoperative TEE was not performed in most of the patients. Hence, some TEE detectable PVDs such as PVL might have been underestimated. Third, the current data cover only the in-hospital results. Lastly high proportion of complicated cases might have partly influenced in-hospital mortality and morbidity.

Table 1. Comparison of mean scores of HLBS-II between groups
×

Table 3. Intraoperative and postoperative results of the patients
×