The SYNTAX study showed that the SYNTAX score (SX score), which represents lesion complexity, is associated with the prognosis of the patients undergoing coronary revascularization(8). In a recent study, a significant relationship was found between carotid USG findings and the SX score(9). However, the relationship between carotid plaque types and the complexity of coronary lesions is not assessed.

In this study, we aimed to examine the relationship between SX score and carotid plaque types.

Four hundred seven patients who underwent coronary artery bypass graft (CABG) operation between 2015 and 2020 were retrospectively screened and those with carotid artery USG were included to the study. The coronary angiograms were evaluated, and SYNTAX score was calculated by two independent interventional cardiologists with online SYNTAX score calculator (www.syntaxscore.com). The lesions of carotid arteries were classified as fibrous, calcific and mixed plaques by carotid ultrasound.

The USG reports obtained retrospectively from institutional medical records. Basic demographic characteristics were recorded. The study conforms to the principles of Helsinki Declaration and was approved by our Institutional ethics committee.

Based on the initial diagnostic coronary angiogram, each coronary lesion causing a stenosis of ≥ 50% diameter in 1.5 mm vessels was scored individually using the SX score algorithm, which is available on the SYNTAX website were assessed(10). The patients’ SX scores were evaluated by two independent experienced interventional cardiologists who were blinded to carotid-USG findings.

The carotid USG records were screened retrospectively. All patients were already evaluated by a radiologist with a high-resolution colour Doppler USG (GE Logiq 9, 5-7 mHz linear probe). The radiologist was blind to the coronary angiographies of the patients. Smooth-surfaced, homogeneous or heterogeneous lesions with high or moderate echogenicity without posterior acoustic shadowing were considered fibrous plaques, while hyperechogenic lesions with posterior acoustic shadowing were classified as calcified plaques (Figure 1). Plaques with both calcific and fibrous plaque characteristics were defined as mixed plaques(11).

All statistical analyses were performed with R-software v. 3.5.1 (R statistical software, Institute for statistics and mathematics, Vienna, Austria) Using ‘nnet’ and ‘lattice’ packages. Continuous variables were presented as median and interquartile range, whereas categorical variables were presented as counts and percentages. Continuous variables were tested by Kruskal-Wallis and categorical variables were tested by chi-square (χ2 ) test between carotid plaque types. We used multinomial logistic regression analysis to calculate adjusted odds ratios (OR) and to examine the relationship between the plaque morphologies and candidate predictors for both right and left carotid artery. Candidate predictors (HT, DM, smoking, sex, age and SYNTAX score) to be included in the multinomial model are clinically and biologically plausible.

A total of 407 patients were enrolled. Median age was 65 (58-71) years and 81.6% of patients were male. In overall population, median value for SYNTAX score was 18 (IQR: 13-24.8). Basal characteristics of patients according to the right and left internal carotid artery plaque morphology were demonstrated in Table 1 and Table 2. The frequency of Hypertension and Age were higher in those patients with fibrous and mixed plaques. However, the SYNTAX score were higher in Calcified plaque than fibrous and mixed plaques.

Table 3. Relationship between the plaque morphologies and candidate predictors nominal
× 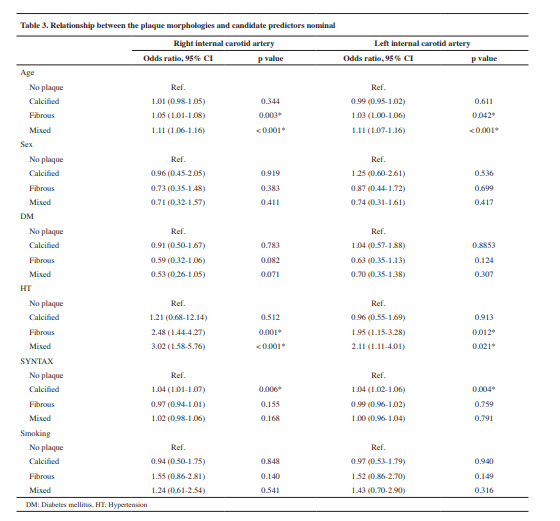 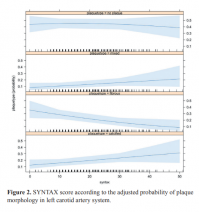 Figure 2. SYNTAX score according to the adjusted probability of plaque morphology in left carotid artery system.
× 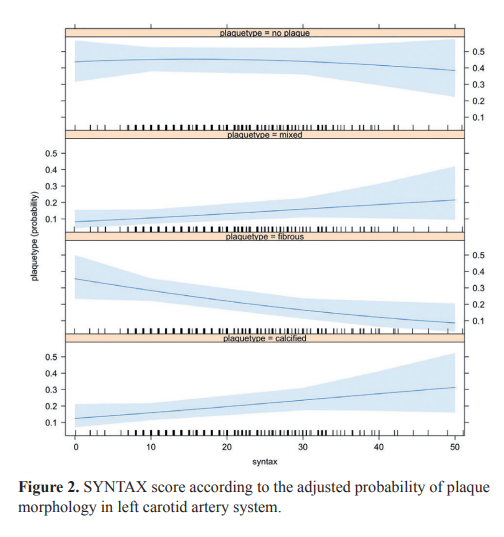 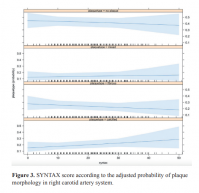 Figure 3. SYNTAX score according to the adjusted probability of plaque morphology in right carotid artery system.
× 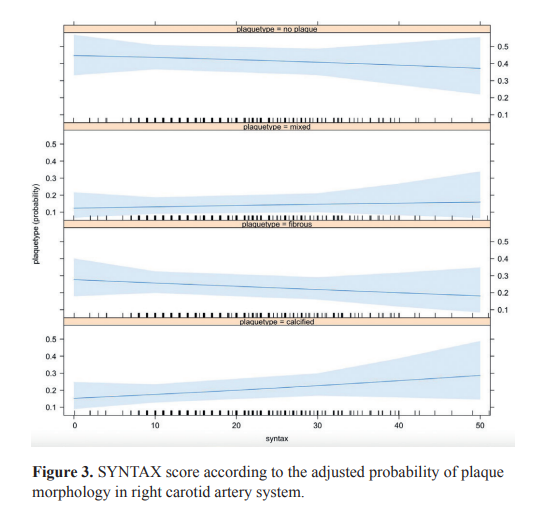 In our study, we found that patients with higher SX score were likely to have calcified carotid plaque rather than fibrous and mixed plaques when compared to no plaque.

Cardiovascular and cerebrovascular diseases have been the main cause of morbidity and mortality worldwide(12). CAD, carotid artery disease and peripheric artery disease may coexist. The extensity of atherosclerotic diseases involving both coronary artery disease, carotid artery disease and peripheral artery disease may be associated with increased adverse events(13). SX score is a scoring system that shows the complexity of coronary artery lesions, and is a strong predictor for major adverse cardiac events (MACE). Yet the role of SX score in determining the carotid plaque morphology is not clear. There are conflicted data on the relationship between the SX score and carotid artery disease. In a the study by Costanzo, et al. the incidence of carotid lesions was shown to be high in patients with multi-vessel disease, but the SX score did not predict carotid atherosclerosis(2). According to the study conducted by Akansel, et al. it was suggested that patients with an SX score of > 27 should be screened for carotid disease before CABG(14). In another study, the relationship between carotid US findings and SX score, no significant relationship between SX score and intima- media thickness (IMT) was demonstrated(15). In another study Ikeda, et al. investigated the relation between carotid US findings and complexity of coronary artery disease. They have demonstrated that carotid artery plaque score and mean IMT was strong negative predictors for the presence of complex coronary artery lesions(9). Apart from other studies we have examined the relation between SX score and plaque morphology. Kanadasi, et al. showed that the presence of calcified plaque in common carotid artery could be a predictor for coronary atherosclerosis(16). In our study, we demonstrated that the patients with higher SX score were more likely to have calcified plaques both in right and left carotid artery.

The first and most important limitation of the study is its’ retrospective nature. Secondly the number of patients included to the study was limited. Thirdly, our results could not be generalized to all CAD patients because of sampling conditions based on patients undergoing to CABG and this sampling bias may lead to artefactual association between carotid plaque types and SYNTAX score. Finally, the relationship between plaque type and SYNTAX score could be assessed as two ways.

Figure 2. SYNTAX score according to the adjusted probability of plaque morphology in left carotid artery system.
×

Figure 3. SYNTAX score according to the adjusted probability of plaque morphology in right carotid artery system.
×

Table 3. Relationship between the plaque morphologies and candidate predictors nominal
×