Introduction: Malnutrition is a serious public health problem that is associated with adverse outcomes in a broad range of disease including cardiovascular disease and diabetes mellitus. Malnutrition is demonstrated to be accompanying to several disease, yet there is a lack of evidence on the impact of malnutrition on cardiac functions in patients with diabetic patients with diabetic retinopathy. Herewith our primary goal was to evaluate the relation between any degree malnutrition with left atrial strain in relevant patient group.
Patients and Methods: Patients with diabetes mellitus with retinopathy, who were referred to the outpatient cardiology clinic were assessed. Those who had sinus rhythm, had no findings of significant valvular heart disease or coronary artery disease underwent to 2-dimensional speckle tracking echocardiography and assessed for malnutrition in their prior examinations were included to the study. Hundred and seventy patients met the inclusion criteria. Malnutrition scores such as Controlling Nutritional Status score (CONUT), nutritional risk index (NRI) and The Prognostic Nutritional Index score (PNI) index were used to evaluate nutrition condition of the patients.
Results: Thirty percent of all diabetic patients were demonstrated to have malnutrition according to the CONUT score. Left atrial conduit strain was demonstrated to decrease [ß: -7.5 (CI 95%, -10.7, -4.3 p< 0.001)], Left atrial reservoir strain was demonstrated to increase [ß: 2.48 (CI 95%,0.83-4.13 p< 0.03)] and Left atrial contractile strain was demonstrated to decrease [ß: -4.21 (CI 95%, -2.21, -6.01 p< 0.001)] in the presence of any degree malnutrition.
Conclusion: In this study we have demonstrated that malnutrition is an important entity in patients with diabetes mellitus and has a significant impact on left atrial strain.

Malnutrition is demonstrated to be accompanying to DM in several studies. There is still lack of evidence on the impact of malnutrition on cardiac functions in patients with DM of whom are already diagnosed with a microvascular complication. Malnutrition is known to be a serious public health problem that is associated with worse outcomes in a broad range of disease including DM(9).

Although evaluation of left atrial (LA) function is not applied to most of our clinical practice, this technique is getting more and more important regarding its’s prognostic implications. In several studies LA size and function were demonstrated to be associated with increased cardiovascular risk and worse prognosis(10-15).

Herewith we aimed to evaluate the influence of any degree malnutrition on cardiac functions by comparing patients’ atrial functions assessed by LA strain analysis.

This is a single centre retrospective observational study conducted by ophthalmology and cardiology departments. Diabetic patients who were investigated for malnutrition and referred to ophthalmology and cardiology policlinics between 2012-2016 were investigated. Among these patients, those who were diagnosed with DR were enrolled to the study. Patients’ medical history, ECG, non-invasive/invasive test results, physical examination findings, blood test results were obtained from the electronical health records of the hospital.

Those who had sinus rhythm, had no evidence of coronary artery disease (established by non-invasive and/or invasive techniques) and underwent 2-dimensional speckle tracking echocardiography were enrolled to the study. Patients with known coronary artery disease, or those in whom ischemia was demonstrated by non-invasive methods were excluded from the study. Additionally, patients with moderate and severe mitral valve regurgitation and mitral stenosis were also excluded. Those patients without LA strain analysis were excluded. Hundred and seventy patients met the inclusion criteria and were enrolled to the study. Echocardiography reports were obtained from the medical records of each patient. Results of LA strain analysis, 2D and doppler echocardiography were obtained from the electronic data base of the hospital. GE Vivid 7 system (GE Vingmed Ultrasound AS, Horten, Norway) with a 3.5-MHz transducer was utilised for echocardiographic evaluation of the patients. Doppler echocardiography was performed. Chamber diameters, wall thickness, LA volume, left ventricular ejection fraction, were assessed according to the recommendations of EACVI(16). Apical four and two chamber views were obtained using conventional 2D gray-scale echocardiography in terms of analysing LA strain. The frame rate was adjusted between 60 and 80 frames/s and patients were told to hold their breaths while recording the images. Three consecutive cardiac cycles were recorded and averaged. The data were analysed using EchoPAC (GE Vingmed Ultrasound AS). We defined the endocardial border manually. The tracing procedure was done automatically by the software(16-19). A strain image is demonstrated in Figure 1.

Figure 1. An example of strain image.
×

Malnutrition was evaluated by using three indices: Controlling Nutritional Status score (CONUT), nutritional risk index (NRI) and The Prognostic Nutritional Index score (PNI) index(20-22). The CONUT score was calculated by using albumin (g/dL), total cholesterol (mmol/L), total lymphocyte count. A score of 0 to 1 is accepted normal; scores of 2 to 4 indicate mild, 5 to 8 indicate moderate and 9 to 12 indicate severe malnutrition. We defined those patients who have a CONUT score of ≥ 2 as patients with “any-degree malnutrition”. The NRI was calculated by the following formula 1,489 x serum albumin (g/L) +41.7 [current body weight (kg)/usual body weight (kg)]. Severe nutritional risk was identified as NRI < 83.5, moderate risk was identified as 83.5 ≤ NRI < 97.5, mild risk was identified as 97.5 ≤ NRI < 100. NRI ≥ 100 is considered no nutritional risk. The PNI score was calculated by the following formula 10 x serum albumin (g/dL) +0.005 x total lymphocyte count (mm3 ). In PNR scoring system there is no mild category. A PNR score higher than 38 is considered to be normal, 35 to 38 is moderate, less than 35 is severe. CONUT score was the instrument that was used in our regression analysis.

Statistical modelling: Multivariable logistic regression models were used. The analyses were based on non-missing data. Predictors (confounders) of multivariable were selected according to a literature consensus opinion by an expert group of physicians. Age, BMI, LVEF, gender, LAVI, SBP, HBA1c and malnutrition indices were included to the model(23-25). For all statistical analyses, statistical significance was defined as p< 0.05. Statistical analyses were performed by using R 4.02 software (Vienna, Austria) with “desctool”, “rms”, “ggplot” packages. 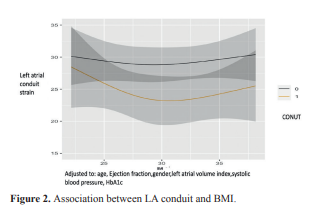 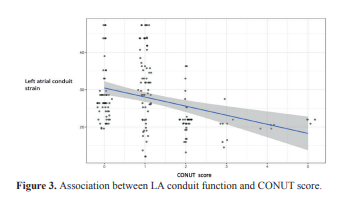 Table 1. Basal characteristics of diabetic patients according to their nutrition condition
× 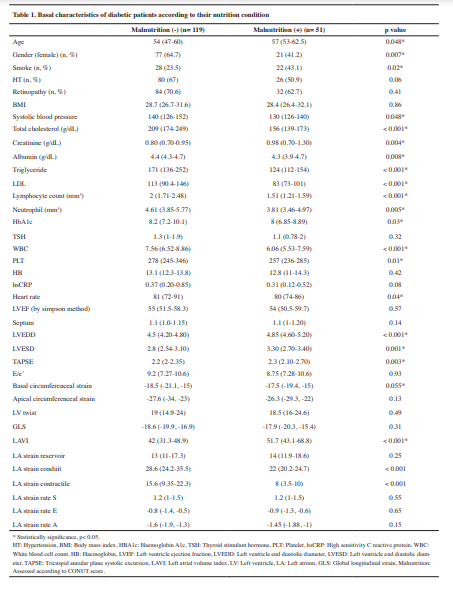 Table 2. Malnutrition parameters in all over patients
× 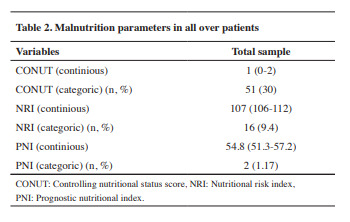 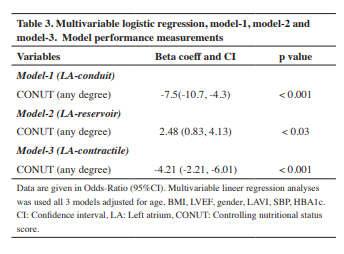 Malnutrition is a serious public health problem that is associated with adverse outcomes in a broad range of disease including cardiovascular disease and DM(26-30).

In this study we have shown the possible unfavourable effects of malnutrition on cardiac functions via LA strain analysis which is a simple, reproducible and angle independent technique. Taking into consideration that malnutrition is a preventable risk factor, it is important to evaluate these patients for nutrition status. By improving nutrition status, we may also improve the prognosis of our patients.

Although recent studies have demonstrated its’ value in predicting the cardiovascular adverse events, evaluation of LA functions has not reached its rightful place in clinical practice. Left atrial functions could be summarised in 3 sections: 1st reservoir function 2-conduit function and 3-contractile function(33,34). In a study by Karagoz A et al. the longitudinal, circumferential, and rotational myocardial mechanics were demonstrated to be impaired in diabetic patients comparing to non-diabetics(35). Herewith we have demonstrated a similar relation between any-degree malnutrition and cardiac functions assessed by LA strain analysis. Nutrition status is a growing public health issue, yet it is still ignored in our clinical practice(9,26). Recently Roubin et al.(26) demonstrated that malnutrition was associated with worse outcomes in patients with acute coronary syndrome. In our study we have demonstrated that malnutrition is associated with decreased conduit and contractile strain values which are indicative for cardiac adverse events.

The decrease in LA conduit and contractile strain in malnourished patients may be attributed to the deficiency of proteins for maintaining the functions of myocardium(36). Another reason may be the alterations in inflammatory state due to malnutrition. Given that chronic inflammation is associated with cardiac fibrosis, the inflammatory alterations in malnourished patients may explain the changes in myocardial functions(37,40).

There are several tools to assess nutritional status. In our study we used three tools and among these CONUT score was able to determine nutrition status more detailed comparing with PNI, NRI similar with the results of Roubin et al.(26) CONUT score is a simple reproducible method that can be applied to our clinical practice easily. Evaluating diabetic patients for malnutrition may help the clinician identify the patients who are more prone to develop cardiac adverse events. Considering that malnutrition is a preventable risk factor and easy to diagnose, it is important to evaluate diabetic patients for nutrition status. Accordingly, it is crucial to encourage the patients for developing right dietary habits and appropriate lifestyle changes.

The retrospective design and small sample size are the main limitations of our study. There are still gaps in standardization of the of methodology for LA strain software algorithms. Finally, there may be unmeasured confounder which are not included in our regression model.

In this study we have demonstrated that malnutrition is an important entity in diabetic patients with DR, regarding its’ relationship with LA strain which is an indicator for cardiac adverse events. Yet further studies with a prospective design and larger sample size are needed to establish the impact of malnutrition on cardiac functions.

Figure 1. An example of strain image.
×

Table 1. Basal characteristics of diabetic patients according to their nutrition condition
×

Table 2. Malnutrition parameters in all over patients
×