Investigation of the Cardiac Autonomic Functions in Patients with Essential Tremor

Patients and Methods: The study included 32 patients diagnosed with essential tremor and 26 individuals without any diseases as the control group. Consensus criteria were used for the diagnosis of essential tremor. A clinical rating scale was utilized to measure the characteristics and degree of essential tremor. Based on this scale, patients were classified as having a mild, moderate, marked, or severe disability. An exercise treadmill test was performed in both the tremor and control groups. Chronotropic index values were used to evaluate the sympathetic system, and resting heart rate index values were calculated to evaluate the parasympathetic system. Heart rate recovery values were calculated at one, two, three, four, and five minutes after the exercise treadmill test.

Conclusion: The findings suggest that cardiac autonomic functions may be affected in patients with essential tremor.

Tremors are the most common movement disorder. They are defined as involuntary, rhythmic, oscillating movements caused by simultaneous and alternating contractions of the agonist and antagonist muscle groups in one or more joint areas. Tremors affect about 5% of the population, particularly those around age 40. There are different classifications of tremor, including resting tremor and movement tremor. Tremors can also be classified based on frequency, amplitude, and affected body area. In clinical practice, action tremor is the most common. Essential tremor and physiological tremor are the two most common types of action tremor. Clinical assessment measures determine the severity of tremors and their response to treatment. The classification of tremors informs the appropriate treatment(1,2). An essential tremor is a symmetrical, gradual-onset postural tremor of the hands and forearms, with no underlying cause yet identified. The various causes, such as central oscillatory system dysfunction and loss of cerebellar Purkinje cells, have been suggested(3,4). It may or may not have a kinetic component. Essential tremor includes different rates of both postural and kinetic tremors. Its incidence increases with age. It tends to be seen bimodally and is most common in the second and sixth decades. Essential tremor occurs in the upper extremities in 95% of patients(5,6). Occasionally, it can also affect the voice, head, and neck(3). Studies have shown that other parts of the body are also affected in patients with essential tremor. Some studies suggest that essential tremor may be comorbid with cardiac autonomic dysfunction, neurodegenerative diseases, psychiatric diseases, sleep disorders, and smell and hearing loss(1,5,7). Sympathetic and parasympathetic systems have been tested to evaluate the cardiac autonomic functions of patients with essential tremor, as cardiac functions are regulated by the regular operation of both systems(8). Cardiac autonomic functions are controlled by the neuronal system. Cardiac autonomic dysfunctions have several comorbid neurological diseases(9,10). The results of previous studies on essential tremor and cardiac autonomic functions are controversial. Some studies have concluded that autonomic disorder is not comorbid with essential tremor(11), while others have concluded that it is(3,7).

The aim of this study was to examine whether cardiac autonomic functions are affected in a group of patients with essential tremor and no accompanying disease.

The study protocol was approved by the local ethics committee (Protocol number: 5/01, Date: 25.04.2017). Informed written consent was obtained from every participant enrolled in the study. Patients diagnosed with essential tremor (tremor group; TG) who had not received previous treatment and a control group (CG) were included in the study. A detailed neurological examination was performed on the TG. The orthostatic characteristics of the patient’s tremor and whether the tremor occurred at rest were noted. Consensus criteria were used for the diagnosis of essential tremor. Using the time criterion in the diagnosis of essential tremor was not recommended by the consensus criteria, because hereditary essential tremor often starts at a younger age(12,13). Based on these criteria, patients with bilateral, symmetrical, permanent, and visible postural or kinetic tremors involving the hands and forearms were included in the study.

Blood biochemistry values and serum triiodothyronine and thyroxine levels of the TG were within normal limits. Groups were asked to avoid stimulants, such as coffee, tea, and nicotine 12 hours before the cardiac test(14). The study included patients who did not have any systemic diseases or drug use.

To calculate the characteristics and severity of tremor, the clinical rating scale for tremor proposed by Fahn et al.(15,16) was used. This scale consists of three parts: A, B, and C and it tests twenty-one functions. Each function was scored from 0 to 4, with 0= normal, 1= mildly abnormal, 2= moderately abnormal, 3= markedly abnormal, and 4= severely abnormal. In Part A, the tremor was graded for various body parts. Part B rated action tremors for the upper extremities. Handwriting, drawing, and liquid pouring tests were performed. Writing function was tested only in the dominant limb. Functional disability was tested in Part C. Speaking, eating, drinking, hygiene, dressing, and working were tested. Then the total score of these three sections was calculated. The highest possible score was 144. If the total score was 0, there was no functional disability; scores between 1% and 24% were classified as mild disability, 25-49% as moderate disability, 50-74% as marked disability, and 75-100% as severe disability.

Patients were asked to participate in an exercise treadmill test (ETT) (CS-200. Schiller, Baar, Switzerland). The test was planned for 10 minutes and as symptom-limited. An automated electrocardiogram was recorded before exercise, at peak exercise, and for every minute of the recovery period. The following parameters of autonomic dysfunction were recorded for analysis: Heart rate, chronotropic index (CI), and heart rate recovery (HRR) at minutes one, two, three, four, and five (HRR 1, HRR 2, HRR 3, HRR 4, HRR 5, respectively). The CI was calculated using the formula: (peak HR - resting HR)/(max predicted HR - resting HR). Chronotropic insufficiency was defined as a CI value< 0.80(17,18). HRR was calculated from the absolute differences in heart rate values for each minute of recovery from the peak heart rate. HRR values of ≤12 bpm at minute one and ≤22 bpm at minute two were considered abnormal(19). The resting HR/HRR (RHR/HRR) index was calculated as (resting HR-HRR)/resting HR(20).

Statistical analysis was performed using IBM SPSS Statistics 22 (Version 22.0; IBM Corp., 2013). The normality of distribution for continuous variables was confirmed with the Shapiro-Wilk normality test. The homogeneity of variances was confirmed with Levene’s test. An independent samples ttest and the Mann-Whitney U test were used to compare the findings between groups. An ANOVA and Kruskal-Wallis test were used to compare the relationship between tremor degree and CI and RHR/HRR index (1-5) in the TG. A p< 0.05 was considered statistically significant for all tests.

The descriptive characteristics of the TG and CG are shown in Table 1. The study included 32 patients diagnosed with essential tremor and, 26 people without any disease as the CG. The groups had similar values. The body mass index value was higher in the CG (p< 0.05). The peak diastolic blood pressure value was higher in the CG than in the TG (p< 0.05). There was no difference between other values. As seen in Table 1, there was no difference that could have affected the research results. The tremor group was divided into four subgroups according to tremor score: Mild, moderate, marked, and severe functional disability.

Table 1. Demographic and clinical characteristics of the groups
× 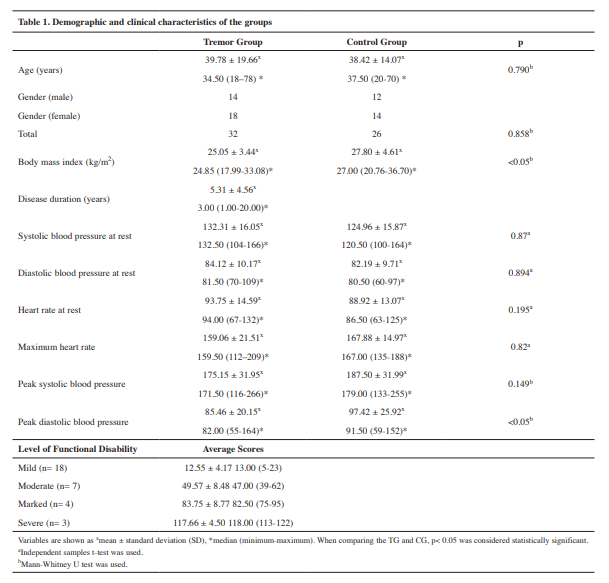 As shown in Table 2, CI values showing sympathetic system activity were calculated by the ETT for the TG and CG. The CI was statistically different between the TG and the CG (p< 0.05). The CI of the TG was lower than 0.80, which is considered chronotropic incompetence(17,18). The CI of the CG was within normal limits.

Table 2. Comparison of the groups in terms of CI and RHR/HRR index
× 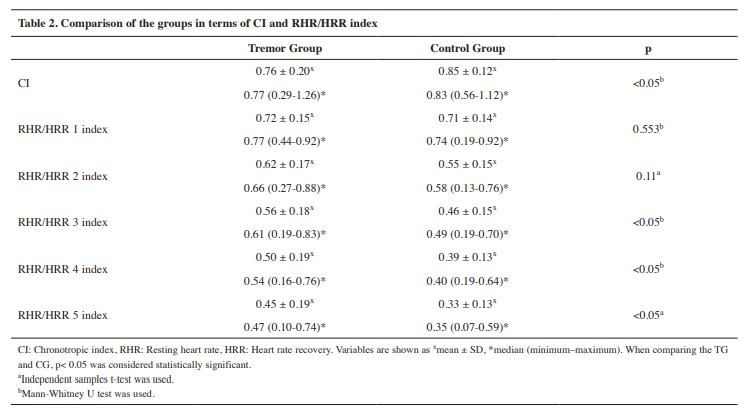 The RHR/HRR index values that evaluate the parasympathetic system activity were measured one, two, three, four and five minutes after exercise. The RHR/HRR index values of the TG and CG were not statistically different at minutes one and two (p= 0.553 and p= 0.11, respectively). However, as shown in Table 2, they were statistically significantly different at the minutes three, four and five (p< 0.05, p< 0.05, and p< 0.05, respectively).

Table 4. Comparison of CI and RHR/HRR index within the tremor group
× 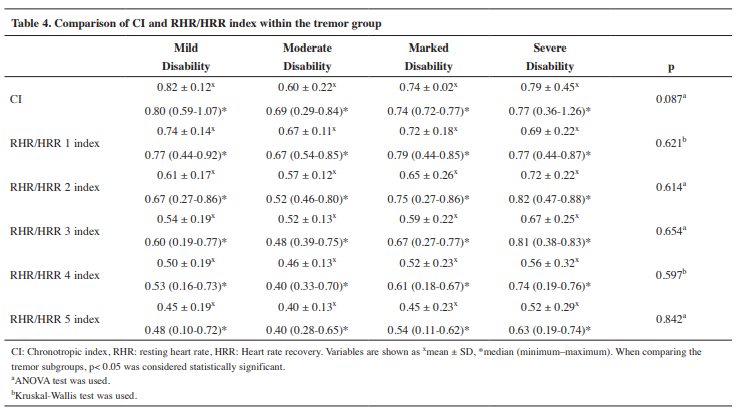 In the present study, impairment was observed in the cardiac autonomic system in the TG. Both the sympathetic and parasym- pathetic systems were found to be affected. Chronotropic incom- petence was observed in the sympathetic system. Sympathetic denervation findings were detected. In the parasympathetic sys- tem evaluation, the HRR was calculated at minutes one, two, three, four and five. Some studies have stated that HRR at min- ute one is more important in the evaluation of parasympathetic function, but others have suggested that analysis performed at minutes one and two should be evaluated together(27,28). Some studies suggest that HRR in minutes three, four and five should be calculated and that the evaluation of recovery in the first five- minute period may give more accurate results in terms of reflect- ing the late period of parasympathetic function(29).

This study examined the cardiac autonomic system of patients with essential tremor. In order to prevent the cardiac system from being affected during the test, patients who were newly diagnosed, who did not have an additional disease, and who did not have a history of drug use were selected. The se- lected patients were found to have insufficiency in both their sympathetic and parasympathetic systems. Additional studies are needed to determine whether essential tremor patients have autonomic dysfunction and whether this is part of the neurode- generative process.

The approval for this study was obtained from Erzincan University Clinical Research Ethics Committee (Decision no: 5/01, Date: 25.04.2017).

Informed written consent was obtained from every participant enrolled in the study.

Table 1. Demographic and clinical characteristics of the groups
×

Table 2. Comparison of the groups in terms of CI and RHR/HRR index
×

Table 4. Comparison of CI and RHR/HRR index within the tremor group
×