Results: The PWDmax, PWDISP, and PWPT which are calculated from the lead DII (PWPTDII) were found to be longer in the group of hypertensive patients (p< 0.05, for all). Electrocardiographic parameters of PWDmax, PWDISP, PWTF, PWPTDII, and PWPTVI were found to be longer in patients with HLAP. Both PWPTVI (p= 0.008 r= 0.395) and PWPTDII (p< 0.001 r= 0.456) were significantly correlated with left atrial volume index.

Conclusion: In this study, the relationship between PWPT and diastolic dysfunction was revealed for the first time in the literature. In addition, the PWPT was found to be increased in patients with increased left atrial pressure (LAP). Our findings deserve attention because electrocardiography is an inexpensive and easily accessible diagnostic method that can be used to detect diastolic dysfunction in hypertensive patients.

The left ventricular ejection fraction (LVEF) is nearly normal in half of the patients diagnosed with heart failure, and it is referred to as heart failure with preserved ejection fraction (HFpEF)(1). HFpEF is associated with increased mortality and morbidity, and hypertension is the most common cause of HFpEF(2,3). Hypertension causes increasing in afterload, which leads to progressive left ventricular hypertrophy and fibrosis, deteriorating myocardial relaxation and compliance, eventually leading to increased filling pressures in the left heart chambers. Although an invasive left end-diastolic pressure measurement is the gold standard for a diagnosis of left ventricular diastolic dysfunction (LVDD), echocardiography is the most commonly used diagnostic tool in clinical practice.

A total of 58 patients with a diagnosis of hypertension who presented to the cardiology department of Kafkas University between June 2017 and April 2018 were included in this retrospective study. Age-sex matched 58 healthy subjects constituted the control group. The patients who had a coronary artery disease, chronic atrial fibrillation (AF), or have been previously diagnosed with AF, valvular heart disease, pericardial disease, left ventricular systolic dysfunction, pulmonary disease, connective tissue disease, diabetes mellitus, thyroid dysfunction, malignancy, and cerebrovascular disease were excluded from the study. All patients received medical therapy per current guidelines.

A standard 12-lead ECG with 25 mm/sec paper and 10 mm/mV (Nihon-Kohden-Cardiofax-S, Tokyo, Japan) was performed for each patient. All ECG strips were scanned and digitized. All uploaded records were magnified and analyzed using a digital image processing software (https://imagej.nih.gov/ij/ index.html). Two experienced cardiologists who were blinded to the patient’s clinical data evaluated all ECG recordings. In the event of a dispute, the opinion of a third cardiologist was consulted, and the conclusion was reached by a consensus. The maximum value of QRS duration was considered as the beginning of the QRS to the J point. Fragmentation of QRS (fQRS) was accepted as the presence of QRS <120 msec and RSR’ patterns or notching in the S or R wave in at least two adjacent leads in the absence of a typical branch block(6). Electrocardiographic left ventricular hypertrophy was defined using Sokolow-Lyon and Cornell voltage criteria. The maximum and minimum P wave duration (PWDmax and PWDmin, respectively) were measured from the lead DII. The PWDISP was accepted as the difference between the PWDmax and PWDmin (7). PWTF was calculated by multiplying the depth and the duration of the terminal negative component of the P wave in the lead V1, and the abnormal PWTF was defined as PWTF≥ 40 ms. PWPT was defined as the duration from the beginning to the peak of the P wave and measured from the leads DII and V1. P wave amplitude (PWamp) was calculated from the lead DII by measuring the distance from the peak point of the P wave to the isoelectric line (millimeter) (Figure 1)(8). 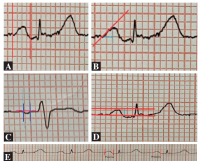 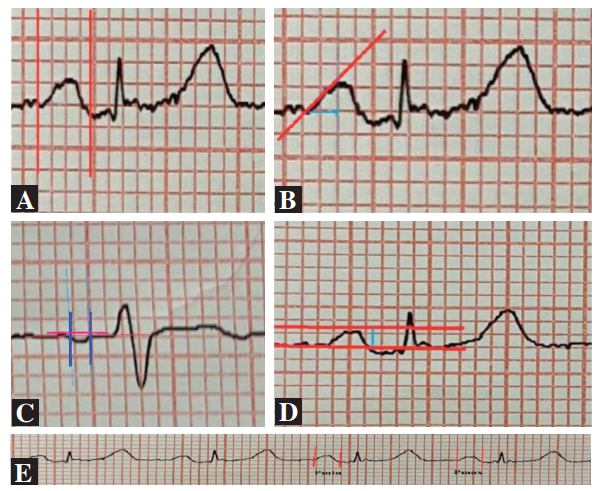 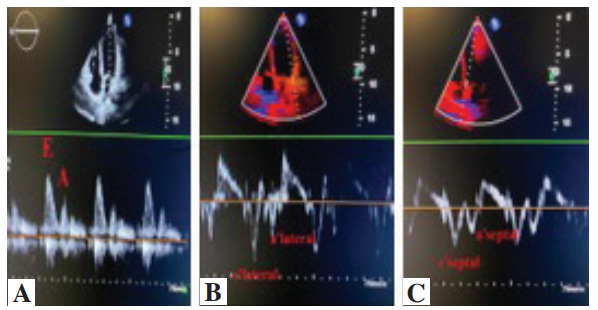 Table 1. Demographic and laboratory features of patient and control groups
× 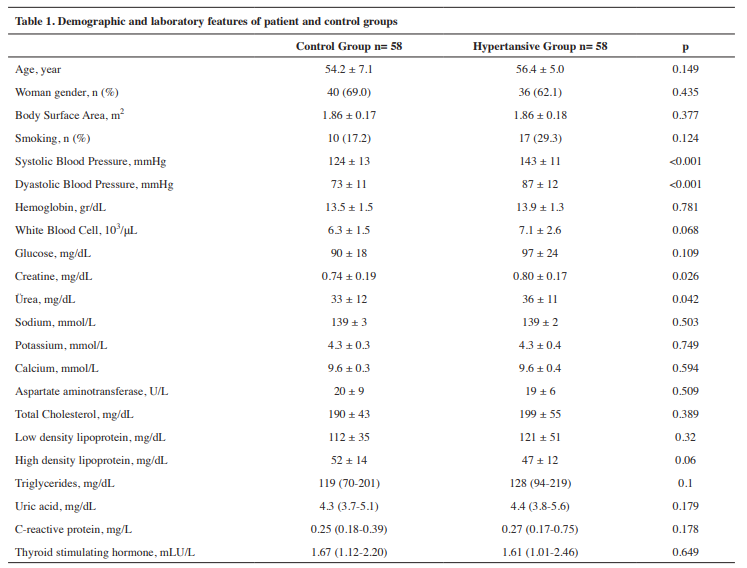 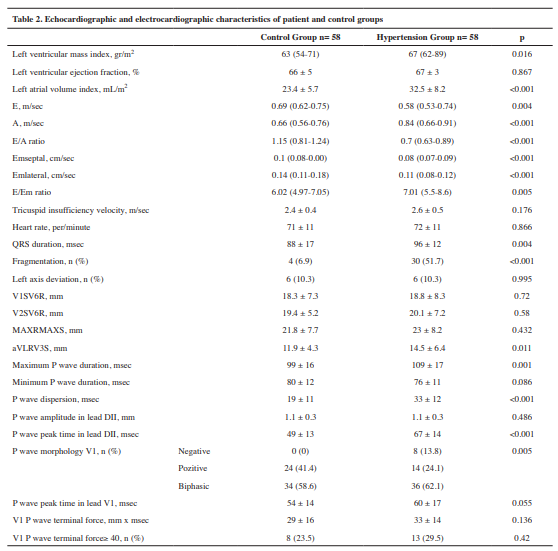 Comparison of Patients with Normal vs. Increased Left Atrial Pressure

In the hypertensive patient group, diastolic dysfunction was detected in 52 (89.7%) out of 58 patients. The patients without diastolic dysfunction and patients with stage I diastolic dysfunction (n= 42, 72.4%) were included in the normal left atrial pressure (NLAP) group, and patients with Stage II (n= 13, 22.4%) and III (n= 3, 5.2%) diastolic dysfunction constituted the high left atrial pressure (HLAP) group. Baseline demographic characteristics and laboratory parameters of all patients stratified according to LAP are demonstrated in Table 3. Between the two groups, there was no difference in terms of mean age, gender, and BMI. Systolic and diastolic blood pressure levels were elevated, and the use of an angiotensinconverting enzyme inhibitor or angiotensin receptor blocker was more frequent in the HLAP group (p< 0.05, for all). Echocardiographic and electrocardiographic findings of all patients stratified according to LAP are shown in Table 4. LVMI, LAVI, E/Em ratio, and Tr-vlc were found to be elevated, and Emlateral was lower in the HLAP group. Pmax, PWPT-DII, and PWPT-V1 were longer and more patients had PWTF≥ 40 in the HLAP group. 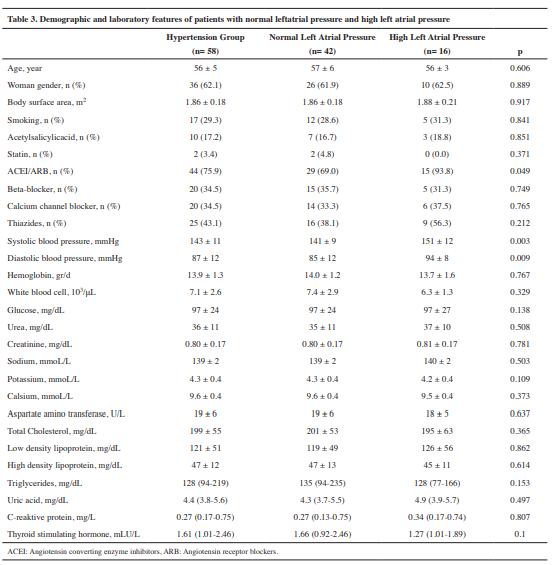 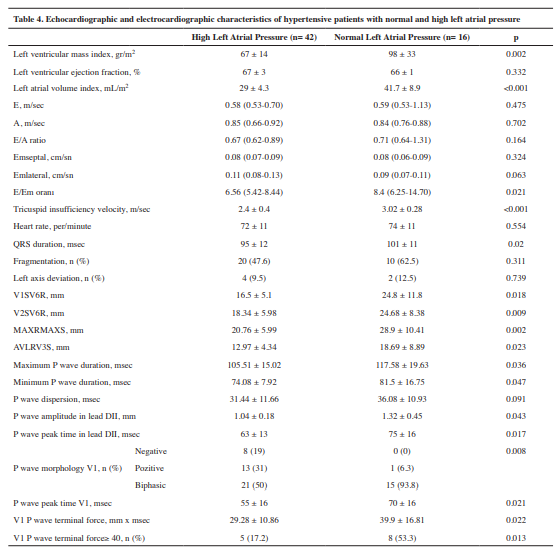 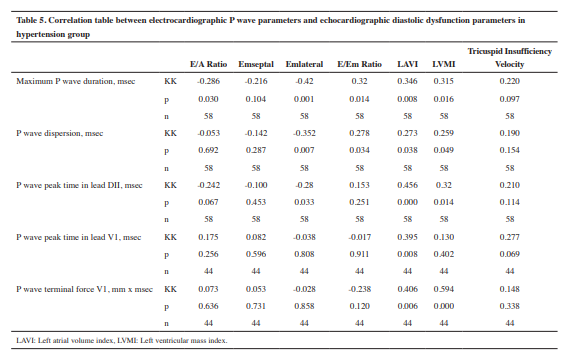 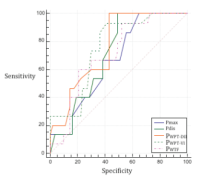 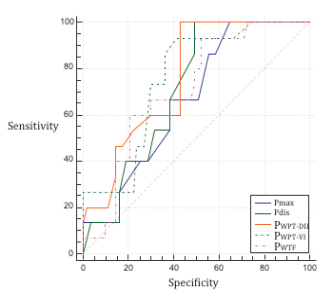 Our study findings demonstrated that PWPT measured from the leads DII and V1 were prolonged in patients with hypertension compared to healthy subjects. In addition, this parameter was found to be associated with elevated LAP measured by means of echocardiography in hypertensive patients.

In the early stages of diastolic dysfunction, the left ventricle’s early passive filling reduces due to impaired relaxation, and the contribution of atrial contracture increases. Our results also supported this pathophysiology; we observed that the early mitral flow velocity decreased, atrial contracture velocity increased, and therefore E/A ratio decreased in the hypertensive group. Furthermore, we found that tissue Doppler velocities were lower, and the E/Em ratio was higher in the hypertensive group, which was consistent with the findings of previous studies(14). Increased left atrial pressure due to increased left ventricular diastolic pressure cause atrial remodeling and fibrosis. This leads to a volume overload and an increase in the size of the left atrium. Similarly, we noted that the LAVI increased in the hypertensive group(15). As seen in our study, increased left atrial volume and fibrosis cause a delay in conduction time, which results in a prolongation of Pmax and Pdis (16). Additionally, we have determined that PWPT, measured from the leads D2 and V1 was also prolonged.

Although an invasive left ventricular end-diastolic pressure measurement is the gold standard in the diagnosis of LVDD, the most commonly used method in daily clinical practice is echocardiography. According to previous studies, the incidence of LVDD in hypertensive patients may range from 18 to 84% because of the varying echocardiographic imaging techniques and diagnostic criteria used(17). Therefore, the ASE has recommended an algorithm based on the mitral flow velocities (E, A), tissue Doppler rates (Em-septal, Em-lateral), E/A ratio, E/Em ratio, LAVI, and Tr-vlc for detection and grading of diastolic dysfunction and determination of LAP elevation(9). By using this diagnostic algorithm, we found that 89.7% (n= 52) of the hypertensive patients had diastolic dysfunction, and 38.1% of these patients had high LAP. Also, we observed that systolic and diastolic blood pressures were higher and the use of angiotensin-converting enzyme inhibitor or angiotensin receptor blocker was higher in patients with increased LAP. This may be attributable to the need for higher anti-hypertensive drug doses in the HLAP patient group due to the increased systolic and diastolic blood pressures and LVMI(18). In the group with HLAP, echocardiographic parameters used for the staging of diastolic dysfunction such as LAVI, E/Em ratio, and Tr-vlc were found to be higher as excepted. In addition, it was observed that the LVMI, which was not included in the staging of diastolic dysfunction, was also elevated in the HLAP group.

Electrocardiographic voltage criteria for left ventricular hypertrophy were evaluated in both subgroups, and we found that these parameters were higher in the HLAP group. Previous studies have shown that Sokolow-Lyon and Cornell voltage criteria may be related to diastolic dysfunction(19,20). Left ventricular hypertrophy and interstitial fibrosis in hypertension can lead to an intraventricular conduction delay and hence QRS prolongation may be observed. As in our study, there are reports in the literature showing that the prolongation of QRS duration may be related to diastolic dysfunction(21). Increased left ventricular diastolic pressure as a result of LVDD raises left atrial pressure, and chronically elevated LAP causes remodeling, resulting in an increase in LAVI. As seen in our study, the LVDD is closely associated with the increase in the LAVI.

The relationship between left atrial dilatation and P wave duration prolongation has been known for a long time and is called ‘P mitrale’(22). Wei-Chung Tsai and his colleagues found in their study of 270 patients that prolonged P wave duration and P wave dispersion were related to diastolic dysfunction and an increase of the LAVI(23). In our study, Pmax and Pmin were associated with increased left atrial pressure, but we didn’t observe any relation with Pdis and HLAP. In a previous study, the PWTF, calculated from the lead V1, was found to be related to the severity of diastolic dysfunction in hypertensive patients with normal left ventricular systolic function(24). Also, we found that Pmax and PWTF were associated with increased LAP in accordance with the literature as mentioned above. Furthermore, Pmax, Pdis, and the PWTF, calculated from the lead V1, were positively correlated with LAVI in our study.

The PWPT has been recently described in the literature, and it has been demonstrated that prolonged PWPT is associated with no-reflow in patients with acute coronary syndrome. The authors claimed that the prolongation in the PWPT duration might be associated with high left atrial and left ventricular end-diastolic pressure in patients with no-reflow(8). However, in this study, there were no invasive measurements and echocardiographic parameters for diastolic functions. In our study, the PWPT, calculated from the lead D2 and V1, was longer in patients with HLAP compared to those with NLAP. In addition, there was a positive correlation between PWPT-DII and PWPT-V1 with the LAVI and a negative correlation between PWPT-DII and Em-lateral. It is well-known that the process of remodeling, which causes structural and electrical changes in the atrium, is triggered when the atrium is exposed to pressure and/or volume load. Increased left atrial volume and interintra atrial conduction delays results of the atrial remodeling, increase P wave duration, P wave dispersion, and PWTF(25). We thought that the prolongation of PWPT duration in the lead D2 and V1 depends on these possible mechanisms.

Our study is a cross-sectional study with no long-term follow-up data on clinical outcomes. Therefore, the effect of PWPT on the prognosis and clinical outcome of hypertension patients has not been investigated. Since individuals in hypertension and control groups live in a limited geographical area, the results of the study may not be generalized to the general population. Invasive left ventricular end-diastolic pressure, pulmonary capillary wedge pressure, and the relationship between P wave parameters were not evaluated as the gold standard for the diagnosis of diastolic dysfunction. Natriuretic peptide levels which have an important role in the diagnosis of diastolic dysfunction have not been studied and the relationship with P wave parameters could not be evaluated. PWPT should be validated in larger patient populations for clinical use in detecting diastolic dysfunction.

The PWPT was found to be longer in hypertensive patients than in healthy controls in our study for the first time in the literature. In addition, the P wave peak duration was increased in patients with elevated LAP. Moreover, we observed that the LAVI was positively correlated with PWPT. The findings of our study could be useful because the PWPT, Pmax, and PWTF are simple and easy ECG parameters for detecting diastolic dysfunction in hypertensive patients.

Table 1. Demographic and laboratory features of patient and control groups
×