Patients and Methods: A total of 100 patients were referred to coronary angiography (CAG). On the day of admission, blood samples were collected, and an echocardiographic evaluation was performed to estimate IVC-CI immediately before CAG. IVC-CI ratios were stratified into three groups (low, mid, high) (<50%, 50-75%, >75%). Creatinine was assessed again at 48 hours following the CAG procedure. The difference between baseline serum creatinine and serum creatinine at 48 hours was calculated as ΔCrea while the difference in GFR was calculated as ΔGFR. Biochemical parameters and CIN ratios were compared between all groups.

Results: There were no differences across the groups in terms of procedural characteristics, preprocedural lab parameters, and concomitant medication. ΔCreatinine, ΔGFR, and the incidence of CIN were significantly higher in the high IVC-CI group.

Conclusion: Post-procedure incidence of CIN, ΔGFR, and Δcreatinine compared to the pre-procedure values were higher in the high IVC-CI group.

Contrast-induced nephropathy (CIN) is one of the most commonly seen complications of procedures that require the use of contrast agents(1,2). Widespread use of diagnostic imaging and interventional procedures have increased the incidence of CIN, which is associated with acute renal failure, hemodialysis requirement, prolonged hospitalization, increased costs, and decreased short and long-term survival(1,3,4). Periprocedural hydration is the only effective treatment that is strongly recommended in recent guidelines for the prevention of CIN(5,6).

Inferior vena cava collapsibility index (IVC-CI) is a noninvasive method with an increasing trend of use and provides insight into the estimated intravascular volume(7,8). Previous studies have shown that IVC-CI is a useful, non-invasive method to estimate intravascular volume that is associated with central venous pressure and right atrial pressure(8,9). Hydration is the mainstay of preventing CIN as it reduces the contraction in renal vessels and urinary cast formation, thereby increasing renal blood flow(10,11). The present study aims to investigate the association between CIN and IVC-CI measured via echocardiography to estimate intravascular volume.

A total of 117 patients referred to coronary angiography (CAG) due to suspected coronary artery disease at Kartal Koşuyolu Training and Research Hospital from January 2015 to November 2015 were enrolled in the study. Informed consent was obtained from all patients before the procedures and the study was approved by the local ethics committee. On the day of admission, an echocardiographic evaluation was performed to estimate IVC-CI immediately before CAG. Of these patients, 15 were excluded due to poor echocardiographic image quality. CIN was defined as an absolute ≥0.5 mg/dL or a relative ≥25% increase in serum creatinine level 48 hours after the procedure. Patients who had left ventricular ejection fraction (LVEF) <60%, moderate or severe valve disease, serum creatinine level ≥1.5 mg/dL, pulmonary hypertension, acute coronary syndrome, anemia, chronic liver disease or liver failure, history of coronary artery bypass grafting, percutaneous coronary intervention and heart valve surgery, peripheral artery disease (requiring peripheral angiography), contrast agent exposure within three months before the procedure, active infection, systemic inflammatory disease, malignancy, hypothyroidism or hyperthyroidism, those receiving N-acetylcysteine, theophylline, aminophylline, nonsteroidal anti-inflammatory drugs, vitamin supplements, antibiotics or steroids as well as patients with poor echocardiographic image quality were excluded from the study.

Echocardiographic evaluation was performed with Vivid 6S (Vivid 6S Echocardiography; General Electric). Maximum and minimum IVC dimensions (IVCmax and IVCmin) were measured in the subcostal view, at 10 mm from the junction between IVC and the right atrium during quiet respiration using the M-mode. IVC-CI was calculated using the following formula:

Coronary angiography was routinely performed using the Judkins technique using six-French right and left heart catheters through the femoral approach. Quantitative coronary angiography (Siemens AcomQuantcor QCA, Erlangen, Germany) was performed by two experienced cardiologists who were blinded to the clinical background of the patients. All of the patients were given the same nonionic contrast agent (iohexol) and contrast doses were recorded. All patients received continuous intravenous saline infusion (0.9%) for 5 hours after CAG (1 mL per kilogram of body weight per hour).

Table 1 shows the baseline characteristics of the patient enrolled in the study. Among the 102 patients included in the study, the mean age was 36 ± 10 years and the ratio of male subjects was 39% (40 patients) with a prevalence of 52% (53 patients) for hypertension and 24% (25 patients) for diabetes mellitus and mean systolic and diastolic blood pressure values were 135 ± 11 and 88 ± 11 mmHg, respectively. Mean creatinine value was 0.7 ± 0.2 mg/dL, while mean GFR was 109 ± 31 mL/min/1.73 m2 . There were 45 patients (44%) receiving statin treatment and 25 (24%) patients were on oral antidiabetics. Low IVC-CI was found in 43 patients (42.2%), with mid IVC-CI in 32 patients (31.4%) and high IVC-CI in 27 (26.4%). CAG results revealed normal coronary arteries in 11 patients. Thirty patients underwent medical follow-up due to noncritical stenosis, 40 patients underwent percutaneous coronary stent implantation, and 21 patients underwent coronary artery bypass grafting.

Table 1. Baseline demographic and laboratory characteristics of the patients
× 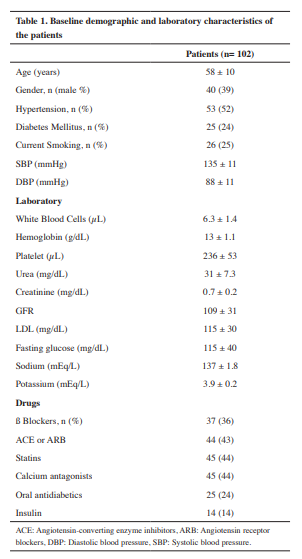 Table 2. Comparison of clinical and laboratory characteristics of all groups
× 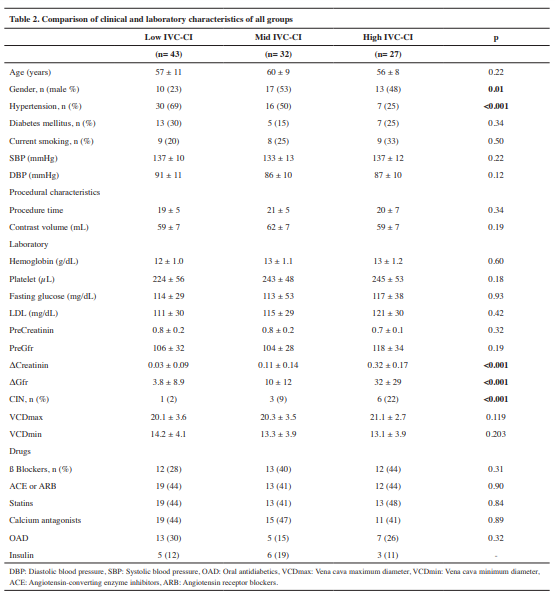 The present study aims to investigate the association between CIN and IVC-CI measured via echocardiography to estimate intravascular volume. The number of patients who developed CIN was significantly higher in the high IVC-CI group compared to the others. Significantly higher ΔCrea and ΔGFR were noted in the high IVC-CI group versus the other groups.

CIN is a high-cost complication associated with increased mortality and morbidity rates(13). Various mechanisms such as chronic kidney disease, concomitant hypotension, diabetes mellitus, exposure to a high-dose contrast agent, congestive heart failure, advanced age, and anemia have been suggested as etiological factors for CIN(14,15). The pathophysiology of CIN is complex and multifactorial(16). Chronic renal failure plays an essential role in CIN pathophysiology. A significant decrease in functional nephrons occurs together with the toxicity caused by the contrast agent(1,17). Following transient vasodilation, the contrast agent causes adenosine-mediated vasoconstriction of endothelium as well as inhibiting nitric oxide-mediated vasodilation, thereby reducing renal blood flow, and resulting in medullary hypoxia, ischemic injury, and apoptosis in renal tubular cells(18,19). The main aspect of CIN prevention is to distinguish the patients at high risk and provide appropriate periprocedural hydration treatment(20).

IVC-CI is a convenient and non-invasive method to estimate intravascular volume. In the present study, the incidence of CIN and the ΔCrea and ΔGFR values were significantly higher in the high IVC-CI group compared to the other groups. The smaller intravascular volume among high IVC-CI patients versus the other groups may have resulted in increased exposure to the contrast agent toxicity. The patients included in this study were relatively low-risk patients in terms of CIN (creatinine <1.5 mg/dL, without congestive heart failure). Since only patients undergoing CAG were included in the study, less contrast agent was used compared to patients undergoing percutaneous coronary intervention. However, a significant correlation was found between IVC-CI and CIN development even in this patient group. In addition to the previously defined predictors for CIN, identifying preprocedural IVC-CI may also be a useful, convenient method to determine the patients with CIN risk in clinical practice. In our study, the hypertension rate was found to be significantly high in the low IVC-CI group. This may be related to a higher volume load in hypertensive patients. Hypertension may play a protective role in the development of contrast nephropathy in patients without severe renal dysfunction. Periprocedural hydration is the only effective treatment that is strongly recommended to prevent CIN(5,6). The mechanism of action of such treatment is multifactorial. CIN may be reduced by decreasing the contrast agent concentration via volume expansion with saline, by suppressing the renin-angiotensin-aldosterone system and through the downregulation of tubuloglomerular feedback via contrast agent dilution in the tubular lumen(21-24). There is no evidence-based and recommended method to determine the optimal ratio of fluid treatment in recent guidelines. Standard hydration therapy is administered to all patients. Serial IVC-CI measurements may help determine the ratio and adequacy of hydration in patients with chronic renal failure requiring hydration, who are at high risk of CIN. This parameter may allow optimal treatment for patients with a greater need for hydration; however, further studies are warranted in this regard.

Although the development of CIN is often determined 48 hours after the procedure, it may also occur in subsequent days. In the present study, evaluation was performed only at 48 hours although the follow-up could have been longer. IVC changes due to hydration could not be evaluated. The limited number of patients is another limitation of this study.

Post-procedure incidence of CIN, ΔGFR, and Δcreatinine compared to the pre-procedure values were higher in the high IVC-CI group. IVC-CI may be used as a parameter to show the adequacy of preprocedural hydration in the patient group at high risk; however, further studies are warranted in this regard.

The approval for this study was obtained from Kartal Koşuyolu High Specialization Training and Research Hospital Ethics Committee (Decision no: 2021/10/528, Date: 24.08.2021).

The author declared that there was no conflict of interest during the preparation and publication of this article.

The author declared that this study has received no financial support.

Table 1. Baseline demographic and laboratory characteristics of the patients
×

Table 2. Comparison of clinical and laboratory characteristics of all groups
×