Introduction: Coronary collateral circulation (CCC) is a natural bypass system for restoring blood flow, and a well-developed CCC is held to protect myocardial function and improve survival after coronary obstruction in patients with coronary artery disease (CAD). Sex steroids have been suggested as potentially hampering the course of CAD progression. We explored the relationship between the serum levels of sex steroids and CCC.

Patients and Methods: A total of 115 males with chronic coronary artery disease who had at least one total coronary artery occlusion were included. Patients were divided into two groups: a well CCC group (Rentrop grades 2-3, n= 64) and a poorly developed CCC group (Rentrop grades 0-1, n= 51). Serum levels of total testosterone, free testosterone, sex hormone-binding globulin (SHBG), and dehydroepiandrosterone sulfate (DHEA-S) were recorded. A p-value below 0.05 was accepted as significant in all analyses. The confidence interval was accepted as 95%.

Conclusion: This study showed that a high level of sex steroids was a predictor of good collateral development in patients with chronic CAD.

Coronary artery disease (CAD) remains the most significant contributor to cardiovascular disease-related mortality, despite advances in diagnostic and therapeutic methods in the past few decades(1-3). Accordingly, the association of non-traditional risk factors with CAD has become increasingly studied in the past few decades with the emergence of several potential non-traditional risk factors(4,5). Based on hypotheses linking androgen deficiency to an increased risk of CAD, the role of androgens in cardiovascular diseases has become a popular research area,(3-6) and testosterone has been suggested to play a potentially protective role against the development and progression of CAD(7,8).

Coronary collateral circulation (CCC) is a natural bypass system for restoring blood flow in the myocardium in cases of stenosis or occlusion of a coronary vessel, while a welldeveloped CCC is considered to protect myocardial function and improve survival after coronary obstruction in patients with CAD(9). The identification of factors associated with the development of CCC is of great clinical significance, although the exact mechanism of the development of good CCC has not yet been elucidated(10).

Prospective studies have shown an inverse correlation between testosterone levels and the incidence of CAD(11,12). Data from epidemiological statistics have indicated decreased serum testosterone levels in parallel with the occurrence of age-related diseases such as premature CAD in men(13) and adverse cardiovascular outcomes including a higher incidence of CAD and a high cardiometabolic profile (increased blood pressure, insulin resistance, dyslipidaemia, atherosclerosis, thrombosis) (14,15). Similarly, sex hormone-binding globulin (SHBG), a key protein involved in testosterone bioavailability, has been reported to be associated with prevalent metabolic disease in men(16).

There are publications in the literature demonstrating that androgens contribute to angiogenesis, which is considered one of the main mechanisms of CCC, at the microvascular level through the androgen receptor(17). Moreover, it has been proposed that androgens can activate vascular repair and neovascularisation(18).

A total of 129 patients attending our clinic between June 2019 and March 2020 were included. These patients had at least one coronary total occlusion in coronary angiography and verified myocardial ischaemia in treadmill exercise tests or myocardial perfusion scintigraphy. Patients with acute coronary syndrome diagnosed within the previous 30 days, a previous history of coronary bypass surgery, stent restenosis, heart failure (left ventricular ejection fraction< 40%), chronic kidney disease (GFR< 90 mL/min/1.73 m2 ), receiving hormone therapy and active malignancy or endocrine disorder were excluded from the study. Of the 129 patients, 14 were excluded since they did not meet the inclusion criteria, and finally, the study was conducted with the remaining 115 patients. Patients were divided into two groups: the well collateral flow (WCF) group (Rentrop grades 2-3, n= 61) and the poor collateral flow group (PCF; Rentrop grades 0-1, n= 54) according to the Rentrop Cohen classification(19). Before the beginning, the study’s protocol was approved by the institutional review board (IRB) ethics committee. The patients were informed about the objectives and protocol of the study in detail and gave informed written consent. The study was conducted under the Declaration of Helsinki.

Coronary angiography was performed with the Judkins technique using an angiography device (Siemens Artis zee Medical Systems). The angiography results of the patients were evaluated by two experienced interventional cardiologists who were blind to the study. According to the Judkins classification, Rentop grades were defined as follows: Rentrop 0= no filling in any collateral vessel; Rentrop 1= impoverished collateral flow, but no filling of epicardial arteries; Rentrop 2= partial perfusion, epicardial arteries receive a contrast agent, but no complete filling; and Rentrop 3= complete perfusion. The contrast agent completely fills epicardial vessels. Based on the Rentrop classifications, grades 0 and 1 were considered poor coronary collateral development, and grades 2 and 3 were considered poor coronary collateral development(19).

The data were presented as mean ± SD or median [IQR] for continuous variables and percentage (n) for categorical variables. The Kolmogorov-Smirnov test searched for the normal distribution of continuous variables. The participants were allocated to two distinct groups according to Rentrop grades. The quality of the collateral flow to 100 occluding coronary arteries was accepted as good for Rentrop grade 2 or 3 and poor for grade 0 or 1. The normally and non-normally distributed continuous variables were compared using a students’ t-test and Mann-Whitney U test, respectively. The frequency of categorical variables in these groups was compared with the Chi-square test. A logistic regression analysis was additionally performed to identify the determinants of well collateral flow. The parameters distinguishing the groups at a significant level (presence of DM, smoking status, serum-free testosterone, total testosterone, and DHEAS levels) were included in binary and multiple regression analyses. The confidence interval was accepted as 95%. Since age is an established determinant of total and free testosterone levels, it was included in the regression analysis as a constant variable. Finally, the predictive performance of serum-free testosterone and total testosterone levels was determined by ROC analysis. A p-value below 0.05 was accepted as significant in all analyses. The Statistical Package for the Social Sciences (SPSS Version 22.0, SPSS Inc., Chicago, IL, USA) was used for these assessments.

When the patients were grouped according to the quality of collateral flow, Group PCF involved 54 individuals, and Group WCF involved 61.

The frequency of diabetics and smokers was higher in the poor collateral circulation group (63.9% vs. 48.7%, 62.3% vs. 51.3%). The remaining demographic, clinical, and angiographic features were comparable (Table 1).

Table 1. Demographics of the study population
× 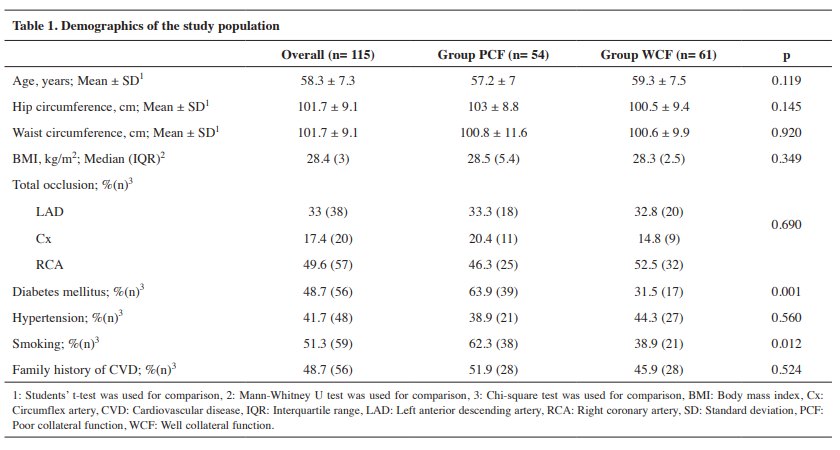 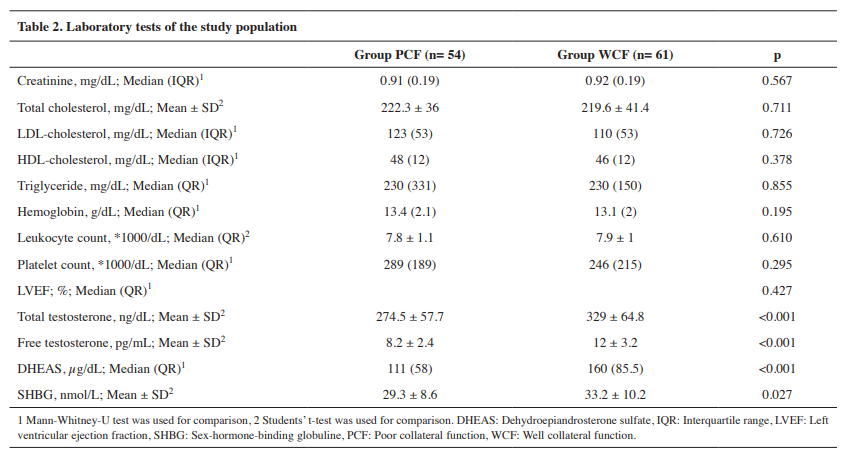 Table 3. Results of the binary and multiple regression analyses performed for identifying the variables that may anticipate the presence of good collateral flow
× 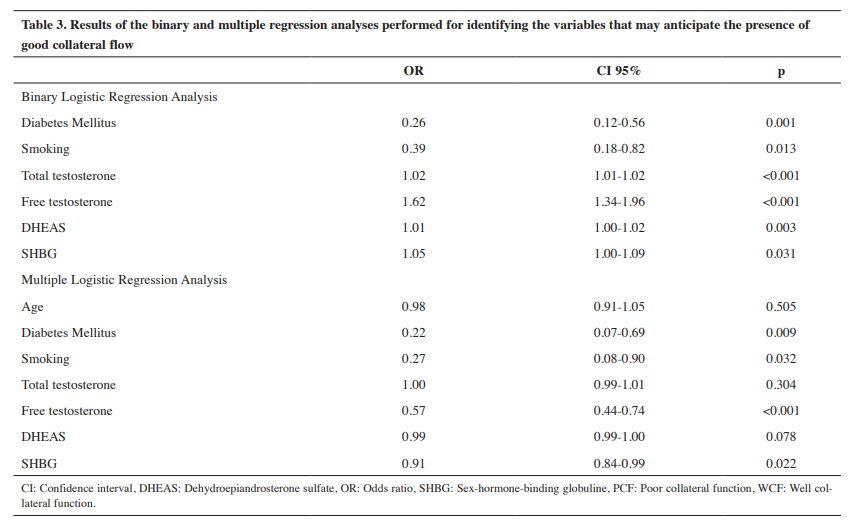 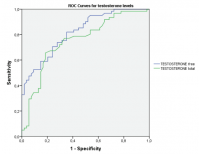 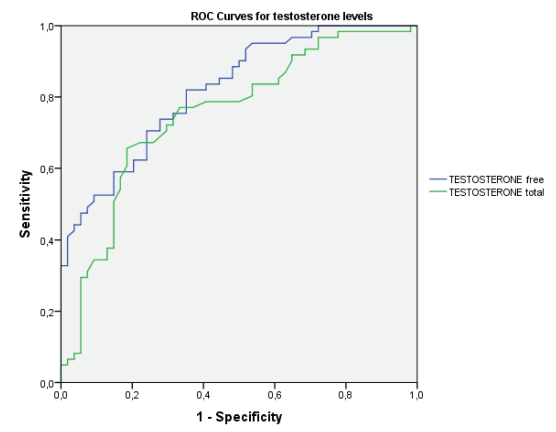 There are two distinct adaptation mechanisms in the development of coronary collateral vessels in the human heart: angiogenesis and arteriogenesis(20). Arteriogenesis is the opening of pre-existing and closed anastomotic canals because of the pressure gradient, which develops following coronary stenosis or occlusion, allowing flow(21,22). Angiogenesis is the formation of new vessels after the activation of endothelial cells by cytokines released from myocardial cells destroyed by coronary ischaemia or necrosis(21-23).

Numerous in vivo and in vitro studies have shown that androgens contribute to angiogenesis by transcriptionally controlling the target genes through androgen receptors and by increasing the interaction of multiple signaling pathways(17,18). Simultaneously, studies that have shown that androgens increase arterial blood flow causing vascular vasodilatation have proposed that androgens may contribute to angiogenesis, which is one of the fundamental mechanisms of coronary collateral circulation (CCC)(24,25).

Previous studies have found a negative correlation between serum total testosterone, free testosterone levels, and CAD, and a low androgen level was an important marker of the severity of CAD(26). The authors also noted a positive correlation between serum total, free and bioavailable testosterone levels and flow-mediated dilation of the brachial artery (FMD) as an indicator of endothelial function(24,25).

Although the exact mechanisms underlying the association between serum testosterone levels and CAD have not been fully elucidated, it has been considered that the abnormal activation of an inflammatory response, accelerated atherosclerosis and vasomotor and endothelial dysfunction are likely to be involved as part of a complex interconnected process(14,17,24,25).

The present study revealed that low serum sex steroid levels increased the probability of poor CCC in male patients with coronary occlusion, while sensitivity analyses indicated free testosterone levels as the most important sex steroid in predicting the development of poor CCC. This seems remarkable, given the relationship between the physiological concentration of intracoronary testosterone and epicardial coronary artery dilatation, increased volumetric blood flow in men with CAD, and the positive effects of short- or long-term testosterone therapy on coronary and peripheral vasomotion(24-27).

The potential lack of generalisability and failure to achieve statistical significance in some parameters due to the relatively small number of cases and sample size may be seen as the main limitations of this study.

In conclusion, in this study, a low androgen level was found to be a risk factor for poor collateral development. In addition, sensitivity analyses revealed that free testosterone and total testosterone were effective in predicting poor CCC development.

The approval for this study obtained from Yüzüncü Yıl University Faculty of Medicine Clinical Researches Ethics Committee (Decision No: 07, Date: 29.05.2019).

Table 1. Demographics of the study population
×

Table 3. Results of the binary and multiple regression analyses performed for identifying the variables that may anticipate the presence of good collateral flow
×