Ischemic cardiomyopathy (ICMP) and nonischemic cardiomyopathy (NICMP) are the two most common types of left ventricular (LV) systolic dysfunction(1,2). They are among to leading causes of heart failure (HF) in the world(3). Whereas ICMP is the most common cause, NICMP affects approximately 30%-40% of patients with reduced ejection fraction(4). The ICMP was defined as a patient’s history of myocardial infarction or more than 70% stenosis in the proximal, or midsection of at least one major epicardial coronary artery. The NICMP was defined as a patient’s history of no coronary disease, coronary disease with 70% stenosis, or coronary disease with 70% stenosis restricted to a branch vessel(5). Previous studies have shown that ICMP and NICMP have some variations in clinical, echocardiographic, and hemodynamic findings, as well as prognosis(6-15). The findings of various studies examining the relationship between HF etiology and right ventricular (RV) function are contradictory. While some studies have reported that RV function is worse in NICMP patients, other studies have suggested that the degree of RV dysfunction is not dependent on the etiology of cardiomyopathy, and there is also one study that suggests RV function is worse in ICMP patients(5,16-20).

This retrospective observational study enrolled 470 patients with end-stage HF who were referred for HT evaluation between June 2017 and June 2020. The ICMP was defined as a patient’s history of myocardial infarction or more than 70% stenosis in the proximal or midsections of at least one major epicardial coronary artery. The NICMP was defined as patient’s history of no coronary disease, coronary disease with < 70% stenosis, or coronary disease with a ≥ 70% stenosis limited to branch vessel(5). The inclusion criteria were age ≥ 18 years, LVEF ≤ 25%, and New York Heart Association (NYHA) functional class II-IV. Mean while, the exclusion criteria were age ≥ 70, inotropic dependency, necessity of the intraaortic balloon pump, multiorgan deficiency, infiltrative, constrictive, or hypertrophic cardiomyopathy, congenital heart disease, history of moderate and severe chronic obstructive pulmonary disease, or primary lung disease, serum creatinin level ≥ 2.5 mg/dL, and comorbidities causing contraindication to heart transplantation or LVAD other than high pulmonary vascular resistance (PVR) determined by the International Society for Heart and Lung Transplantation. The study was approved by the local Ethical Committee at 2017 (2017.3/9-32).

The outcomes were LVAD implantation, urgent HT, and death. The HT or LVAD implantation was carried out in accordance with the ISHLT guidelines by a joint decision of our hospital’s HT/LVAD committee(25,26). Urgent HT was defined as transplantation in a patient who required inotropic drug support, an IABP, or temporary mechanical circulatory support. HT from the routine waiting list was not considered to be the end point.

Means were used to express values for normally distributed continuous variables, and medians were used to express values for non-normally distributed variables (interquartile range). Group comparisons for continuous variables were analyzed by using an independent t-test if data distribution was normal. Mann-Whitney U test was used for group comparisons of continuous variables if data distribution was not normal. Comparisons of categorical variables were evaluated by the chi-square test. The B value and odds ratio (OR) with the 95% confidence interval (CI) were calculated in univariate and multivariate analyses with logistic risk analysis. NICMP, severe FMR, severe tricuspid regurgitation, atrial fibrillation, LVEF, and PAPm were all included in the model as potential predictors of RV dysfunction. Covariates in multivariate analysis were performed based on clinical and biological plausibility, as well as their association with RV dysfunction, as demonstrated in previous studies. The outcome was assessed using the Cox proportional hazards model in both univariate and multivariate analyses. The model was built based on previous research and our focused variable, which was expected to have an impact on the outcome(27,28). Age, gender, HF type (ischemic vs. non-ischemic), diabetes, atrial fibrillation, LVEF, severe FMR, severe tricuspid regurgitation, LV diastolic dysfunction grade 3, TAPSE, hemoglobin, sodium, N-Terminal pro-brain natriuretic peptide, and RVSWI were all included in the model. Significance level was considered as p< 0.05 in all statistical analyses. All statistical analyses were performed using SPSS version 21.0 (SPSS Inc. Chicago, Illinois).

Table 1 summarizes the patients’ baseline demographic and clinical measurements. ICMP was found in 249 (52.9%) of the 470 subjects, while NICMP was found in 221 (47.0%). The majority of the ICMP patients were older men. The two groups had comparable rates of atrial fibrillation, mild to moderate chronic obstructive pulmonary disease, HF length, and NYHA functional class. The ICMP had higher rates of hypertension, diabetes, hyperlipidemia, cerebrovascular disease, and smoking (p< 0.001 at all). Patients with ICMP had a higher BMI than those with NICMP. The serum creatinine, sodium, albumin, and bilirubin levels of the two groups did not differ significantly. Serum haemoglobin and transaminases (AST and ALT) were lower in the ICMP group (all p< 0.05). The medications used by the two groups were similar.

Table 1. Demographic and clinical characteristics of the patients with ischemic and non-ischemic cardiomyopathy
× 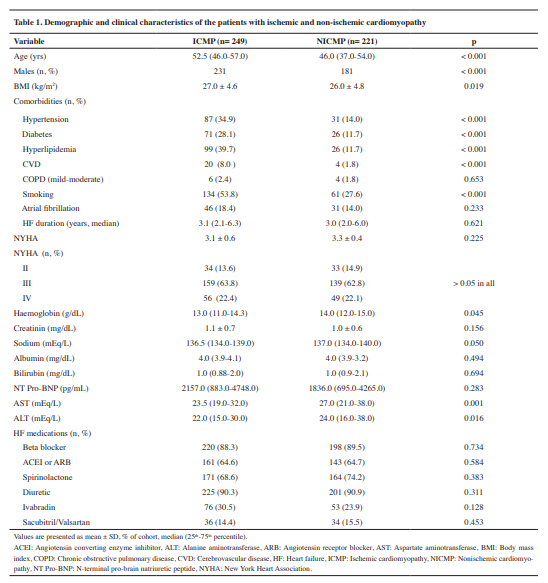 Table 2. Echocardiographic findings of the patients with ischemic and non-ischemic cardiomyopathy
× 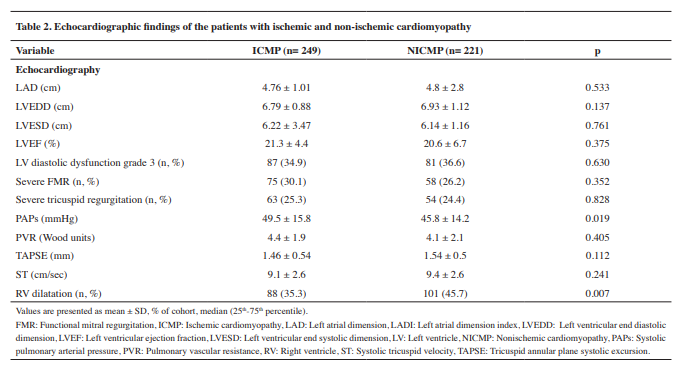 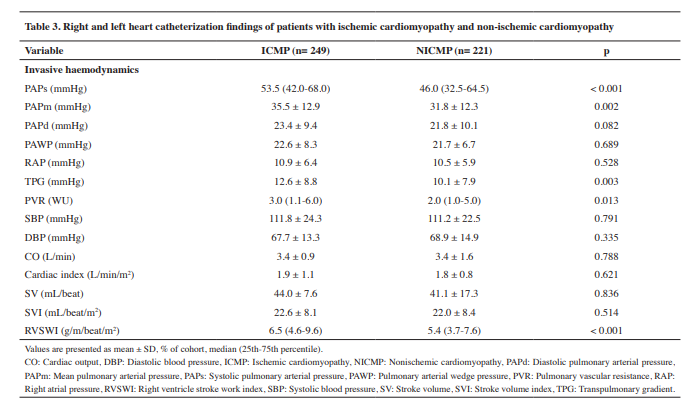 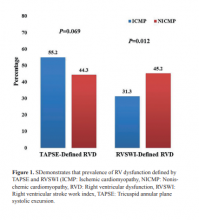 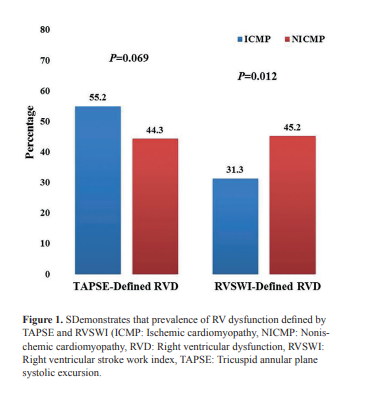 Association of ICMP and NICMP with Outcome 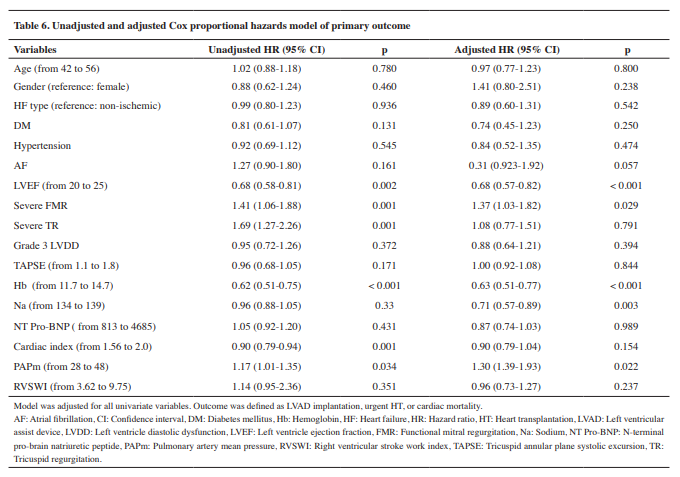 In this study, we demonstrated a number of significant findings:

2. While NICMP had more RV dilatation, TAPSE and ST were similar in both groups;

7. HF etiology was not predictor for primary outcome including LVAD implantation, HT transplantation or death in patients with end-stage HF.

Patients with ICMP had higher PAPs, PAPm, PVR, and TPG than those with NICMP in the current study. Despite the fact that RHC is the gold standard for assessing RV afterload, very few studies comparing ischemic and nonischemic HF have invasive measurements. Patients with ICMP had higher PAPs than patients with NICMP, according to Felker et al, who researched the underlying causes and long-term survival of patients with cardiomyopathy. The PAPm and PVR, on the other hand, were not calculated in this analysis(9). By La Vecchia et al., PAPs, PAPm, and PVR were found to be similar in ICMP and NICMP(16). The LVEF, NYHA functional class, cardiac index, and SVI of this study’s patients, on the other hand, were all higher than those of our study patients. Because the patients in the previous study had better clinical conditions than the patients in our study, RV afterload in these patients may not have increased. This circumstance may have prevented the previous study from demonstrating the difference in RV afterload between two groups accurately. The PAPm and RV dimensions assessed before the LVAD implantation were similar between the ischemic and nonischemic groups in a study investigating the effects of HF on LVAD outcomes. However, the sample size in this study was limited(19).

The RVSWI is a well-known invasive measure that demonstrates RV function, and it was found to be higher in ICMP than in NICMP in the current study. There have been few studies that have investigated the effect of HF etiology on RV function, and the results have been inconsistent; additionally, RVSWI have not been included in any of the existing studies.

While some studies have reported that RV is worse in patients with NICMP, other studies suggest that the degree of RV dysfunction is not dependent on the etiology of cardiomyopathy(5,16-19). In contrast to these studies, there is one that suggests that RV function is even worse in ICMP(20). The use of RVSWI in the evaluation of RV function in patients with end-stage HF has grown in popularity as the number of LVADs implantation in these patients has increased. There is not a study that has investigated the effect of HF etiology on RVSWI. We found that RVSWI was lower in NICMP than in ICMP in the current study.

In patients with left HF, RV dysfunction is linked to an increased risk of death. TAPSE and RVSWI were utilized to define RV dysfunction. TAPSE is a simple, non-invasive test that is widely used to evaluate RV function. RV dysfunction was defined as TAPSE ≤ 1.5 cm. RVSWI is primarily used to assess the necessity for right-sided assist devices in LVAD patients. Low RVSWI was discovered to be a risk factor for RV assist device (RVAD) after LVAD(29-31). RV failure was defined as RVSWI < 5 gxm/m2 /beat, as described in the study by Imamura et al.(24). TAPSE-defined RV dysfunction was comparable in NICMP and ICMP, but RVSWI-defined RV dysfunction was greater in NICMP. We couldn’t say for sure whether NICMP is a risk factor for RV dysfunction because of the contradictory findings and the lack of a gold standard technique for testing RV function. Furthermore, no research has been done to compare TAPSE and RVSWI in terms of demonstrating RV function.

According to previous studies, patients with ICMP had a worse prognosis than those with NICMP(10,14,32). However, in the current study, we found that HF etiology was not a predictor of primary outcomes including LVAD implantation, urgent HT, or mortality. This contrasting result could be due to a variety of factors. First, our primary outcome differed from that of the previous study. Second, our study’s patient population differed significantly from those in the other studies. Unlike previous studies, we only included patients who were being evaluated for HT, and some cardiomyopathies such as infiltrative cardiomyopathy, hypertrophic cardiomyopathy, severe renal disease, and other comorbidities that were contraindicated for HT were excluded. Because of this circumstance, the clinical outcome may have differed from that of other studies. Finally, the LV functions of our study’s patients were worse than those of previous studies’ patients, and in the advanced stages of HF, the etiology may have no effect on clinical outcome.

There were some limitations to this study. First, this study has the limitations of being retrospective and single-center. Second, the findings of our study are only applicable to patients with end-stage HF who are candidates for HT or LVAD implantation, and generalizations to patients with severe comorbidities or better LV function are not possible. Third, the lack of invasive or non-invasive gold standard methods to evaluate RV function, the difficulty of detecting biventricular failure by physical examination in this group of patients, and the inability to evaluate with MRI due to the majority of patients having an intracardiac device made identifying RV dysfunction difficult. TAPSE and RVSWI were used to identify RV dysfunction, but it is unknown which is more accurate at determining RV function.

As a result, we found that RV afterload was higher in ICMP than in NICMP due to higher PAPs, PAPm, and PVR values in ICMP. Because of the conflict between TAPSE-defined RV dysfunction and RVSWI-defined RV dysfunction, we couldn’t say for sure whether HF etiology has an effect on RV function. Finally, we demonstrated that HF etiology was not predictor of primary outcomes including LVAD implantation, HT transplantation or death in patients with end-stage HF.

Table 1. Demographic and clinical characteristics of the patients with ischemic and non-ischemic cardiomyopathy
×

Table 2. Echocardiographic findings of the patients with ischemic and non-ischemic cardiomyopathy
×