Introduction: In humans, long-term fasting reduces systemic inflammation and oxidative stress markers associated with atherosclerosis, and long-term fasting has been shown to have positive effects on cardiac functions. Frontal QRST angle (fQRSTa) is predictor of ventricular repolarization and is associated with arrhythmia incidence and adverse clinical outcomes. The aim of our study is to investigate the effect of longterm fasting periods on cardiac conduction system, ventricular functions and especially fQRSTa.

Patients and Methods: Fifty-seven volunteers who entered the long fasting period by fasting during the month of Ramadan were included in our study. Basal electrocardiography (ECG) records of patients before Ramadan were taken and control ECG records were examined after 1-month intermittent fasting periods. Basal and post-fasting ECG parameters and especially fQRSTa were compared.

Conclusion: In this study, which examined the effect of long fasting on the heart conduction system and ventricular functions, an increase in P wave amplitude was observed in the post-fasting period. In addition, after fasting, increased in the QRS axis and decrease in the T axis result in a decrease in fQRST axis. This can be evaluated as a positive effect on ventricular functions.

Prolonged fasting elicits cellular responses to improve glucose regulation between and within organs, increase stress resistance, and suppress inflammation. Metabolic transition from the use of glucose as a fuel source to the use of fatty acids and ketone bodies provides energy efficiency and reduces the rate of respiratory exchange. During fasting, cells activate pathways that increase internal defenses against oxidative and metabolic stress and remove or repair damaged molecules. In humans, long-term fasting has a positive effect on obesity, insulin resistance, dyslipidemia and hypertension. It reduces systemic inflammation and oxidative stress markers associated with atherosclerosis(1).

Our study is a single-center retrospective observational study and 57 volunteers who entered the long fasting period by fasting during the month of Ramadan were included in this study. Baseline ECG recordings of patients were taken before the Ramadan period, and control ECG recordings were examined after 1-month intermittent fasting periods. Patients under 18 years of age, patients with systemic and/or cardiovascular disease, atrial fibrillation, implanted pacemakers, known cardiac conduction system disease and/or a history of medication usage that may affect the conducting system, severe valvular heart disease and those with electrolyte disturbances were excluded from the study.

During the 4-week period, our participants practiced 16 hours of hunger every day, followed by 8 hours of eating. Thus, patients were reevaluated 4 weeks after intermittent fasting periods.

Table 2. Comparison of ECG findings from pre- and post-fasting periods
× 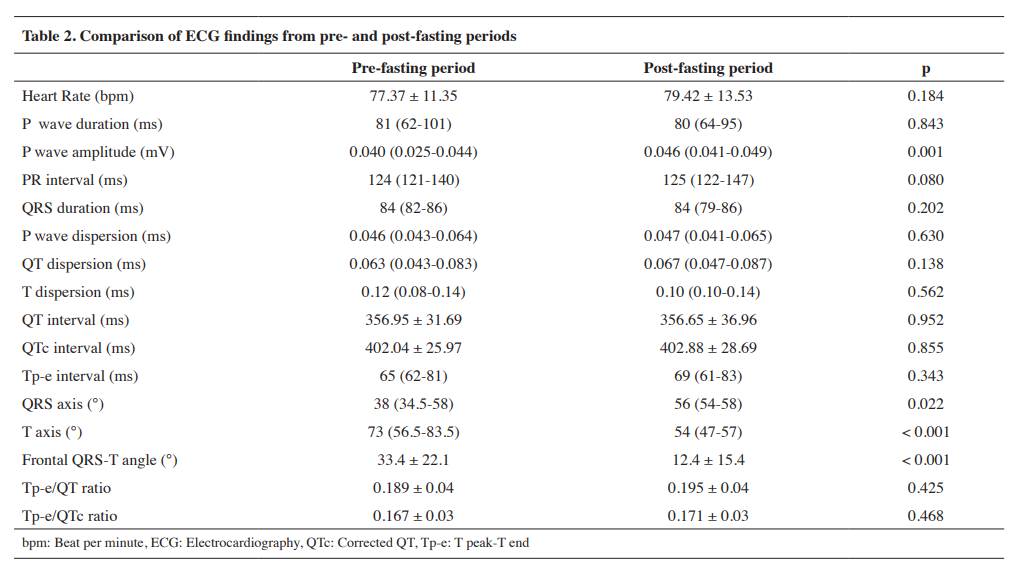 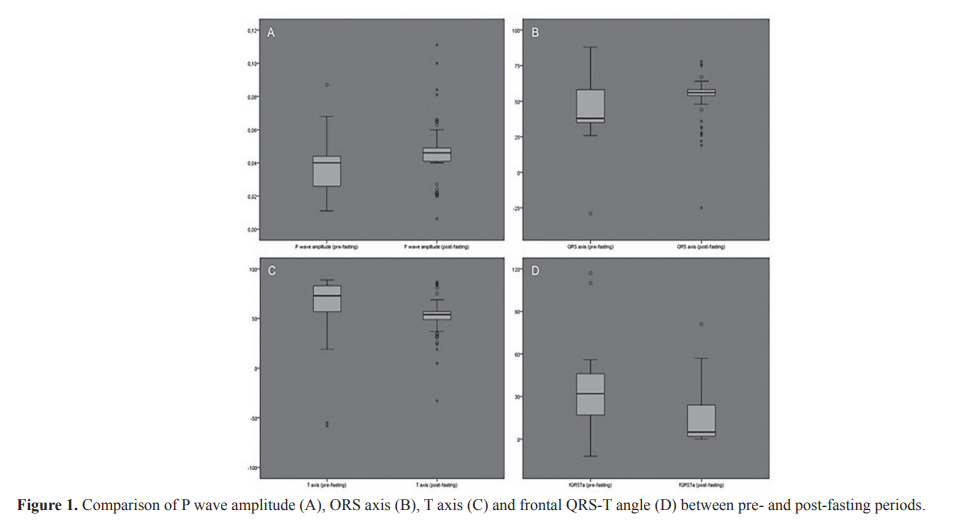 Long-term fasting provides positive effects on several systems in the body. Its effects are very significant in many aspects, especially glucose regulation, energy efficiency, suppression of inflammation, and improvement of atherosclerotic indicators. Long-term fasting elicits adaptive cellular responses that are integrated to improve glucose regulation between and within organs, increase stress resistance, and suppress inflammation. During fasting, cells activate pathways that increase internal defenses against oxidative and metabolic stress and remove or repair damaged molecules(5). The transition from the metabolic use of glucose as a fuel source to the use of fatty acids and ketone bodies provides greater metabolic flexibility and energy efficiency with the production of fatty acids and ketone bodies, resulting in a decrease in the respiratory exchange ratio (the ratio of carbon dioxide produced to oxygen consumed)(6). Ketone bodies stimulate gene expression for the brain-derived neurotrophic factor, which has effects for brain health and psychiatric and neurodegenerative disorders(5). In humans, intermittent fasting interventions have a positive effect on obesity, insulin resistance, dyslipidemia, hypertension and inflammation(7). In a study involving overweight adults, 12-month calorie restriction led to improvements in verbal memory, executive function and global cognition(8). In animals and humans, long-term fasting improves many cardiovascular health indicators including blood pressure; resting heart rate; high-density and low-density lipoprotein (HDL and LDL) cholesterol, triglycerides, glucose and insulin levels, and insulin resistance(9-12). In addition, long-term fasting reduces systemic inflammation and oxidative stress markers associated with atherosclerosis(1,13-15). Various case studies involving patients with glioblastoma show that intermittent fasting can suppress tumor growth and prolong survival(16,17).

Although there are numerous studies on systems affected by long-term fasting in this way, we have found very few studies in the literature evaluating its effect on ECG parameters or fQRS-T angle. We hope our work is a step forward in this regard. In a study evaluating the effect of 4-hour and 10-hour fasting on ECG parameters, a decrease in P wave duration and amplitude, decrease in QRS wave duration, decrease in T wave duration and amplitude, prolonged PR interval, decreased ventricular velocity and a right shift in the R axis were observed after 10 hours of fasting(18). In another study evaluating 10-day fasting, a decrease in heart rate, decrease in QRS and T amplitude rate and inverted T wave rate were found after the period(19). These findings might be due to the fact that intermittent fasting increases heart rate variability by increasing parasympathetic tone in humans(20). In our study, supporting these findings, the frontal QRS angle was found to be statistically lower in the prefasting period compared to the post-fasting period.

The fQRS-t angle is the angle between the frontal QRS and T vectors and is an indicator of the heterogeneity of ventricular repolarization(2). A wider QRS-T angle reflects an abnormal regulation of ventricular repolarization and is considered a strong and independent risk indicator for cardiac morbidity and mortality compared to other traditional cardiovascular risk factors and ECG risk indicators such as the length of the QT(3). The wide fQRS-T angle reflects an increase in ventricular repolarization heterogeneity and arrhythmic vulnerability(4). Frontal planar QRS-T angle measurements can be helpful in detecting ventricular depolarization and repolarization anomalies in hypertensive patients. The QRS-T angle is a sensitive indicator of repolarization changes in systemic hypertension(21). Atsma et al. showed that increased blood pressure is directly related to cardiac repolarization disorders, and the results are stronger for the QRS angle than the T axis(22). The fQRS-T angle has been shown to be a strong and independent indicator of cardiac mortality in various groups such as coronary artery disease, heart failure, type 2 DM, postmenopausal women and Chagas disease(23-27). Frontal QRS-T angle was also associated with sudden cardiac death. Wide fQRS-T angle (> 100) was associated with a 3-fold increase in risk of sudden cardiac death, according to the Finnish CHD Cohort with 10957 middleaged patients(28). Abnormal frontal QRS-T angle is associated with increased incidence and mortality in CAD in men and women(29). Although somewhat inconsistent with this, in the National Health and Nutrition Examination Survey III cohort of 7052 patients, the frontal angle appeared to be only predictive in male and relevant in the female population. In the same study, while the study was started with those who did not have a known CVS disease; at the end of the study, it was determined that the increased fQRS-T angle doubles the risk of death from CVS(30). Many studies have shown that widened frontal QRS-T angle is associated with an increase in all-cause mortality. In one of them, The Finnish Cohort, the enlarged fQRS-T angle gave a hazard ratio of 1.8 for total mortality, which remained statistically significant in multivariate analysis(28). In our study, we calculated a decrease in fQRST angle in post fasting period compared to pre-fasting period. Based on this result, we can predict that fasting may improve ventricular functions and have positive effects on the cardiac system.

In this study, in which the effects of long fasting on the cardiac conduction system and ventricular functions were examined, an increase in P wave amplitude was observed in the post-fasting period. In addition, after fasting, the QRS axis increases and the T axis regresses, and consequently, a decrease in the frontal QRST axis is observed. This can be evaluated as a positive effect on ventricular functions.

The main limitations of this study are its retrospective nature based on screening the records of a single center and the small sample size. With larger groups, more comprehensive data can be obtained. In addition, we do not know the effect of the findings on clinical outcomes such as the incidence of arrhythmia with holter monitoring.

As this study was retrospective, a consent form was not obtained from the patient.

Table 2. Comparison of ECG findings from pre- and post-fasting periods
×