Patients and Methods: In this retrospective study, all patients who were operated for degenerative mitral regurgitation by a single surgical team between 2013 and 2017 were investigated. We determined early and mid-term cumulative survival rates, repair failure and freedom from reoperation. In addition, as a specific subgroup, the results of patients under 18 years of age after mitral valve repair were investigated.

Results: Mitral repair was performed in 121 of 153 degenerative mitral regurgitation patients during the study period. The overall repair rate was 79%. Mitral valve repair rate increased significantly over years. The median follow-up time was 63 (range 10-92) months. Early mortality was 2.5% (n= 3). During the follow-up period, moderate-to-severe mitral regurgitation was observed in 14 (11.8%) patients, mitral valve reoperation was required in 7 (5.9%) patients. Valve repair was performed in 4 of 7 patients under the age of 18. There was no pediatric case requiring reoperation during the follow-up period (median 46 months).

Chronic primary mitral regurgitation (MR) is the pathology of the components of the valve (leaflets, chordae tendineae, papillary muscles, annulus) that causes valve incompetence. Systolic regurgitation of blood from the left ventricle to the left atrium lead to volume overload and finally may cause myocardial damage(1,2).

In high-income countries, the most common cause of chronic primary MR is mitral valve prolapse (degenerative mitral valve). Young patients usually present with severe myxomatous degeneration with a substantial excess of both anterior and posterior leaflets and subvalvular apparatus (Barlow’s disease). In older patients, primary MR is characterized by fibroelastic deficiency disease and chordal rupture(3).

This single center-single surgical team retrospective study included all patients who 01/2013 and 12/2017 at a highvolume cardiac center.

Exclusion criteria were: (1) Patients who refused mitral valve repair, (2) Minimally invasive mitral operations (minithoracotomy or transapical neochord, etc.), (3) Patients other than degenerative mitral valve pathology. This study was approved by the Institutional Research Ethical Committee of Kartal Koşuyolu High Specialization Training and Research Hospital (number: 2019.4/7-184). The study conformed to the principles of the Declaration of Helsinki.

The decision of operation was made by the consensus of at least one cardiac surgeon and a cardiologist. All of the operations were performed through median sternotomy. Cardiopulmonary bypass with mild systemic hypothermia (28-32°C) was used. The intermittent antegrade blood cardioplegia was used routinely in all patients. Additional retrograde cardioplegia was used optionally according to the surgeon’s preference. Extracorporeal circulation was established through cannulation of the ascending aorta and bicaval venous cannulation. Mitral valve exposure was gained via standard left atriotomy. Prolapse of the leaflets was recorded as isolated posterior leaflet prolapse, isolated anterior leaflet prolapse, or bileaflet prolapse. After careful examination of leaflets and subvalvular structures, an attempt was made to establish an adequate coaptation surface. The valve competence was checked with a saline test. Mitral ring annuloplasty was performed in all patients for annular stabilization after leaflet and/or cordal procedures. After weaning from cardiopulmoner bypass, adequacy of repair is judged by transesophageal echocardiography (TEE) after physiological filling pressure and blood pressure have been established. At the intraoperative TEE, the presence of more than mild mitral regurgitation, persistent systolic anterior motion, more than mild transvalvular gradient or the coaptation surface not sufficient to guarantee long-term durability are considered suboptimal repair. In these cases, the surgeon attempted a second mitral repair or performed mitral valve replacement, depending on the patient’s intraoperative findings.

In this study, intraoperative, postoperative and follow-up results of the patients were analyzed. Early results include procedural success, in-hospital mortality, and postoperative complications. Follow-up results are cumulative survival, moderate to severe MR free survival, reoperation due to mitral valve pathology. Postoperative events were compiled and analyzed according to the Guidelines for reporting morbidity and mortality after cardiac valvular operation(5).

Categorical variables were presented as counts and frequencies; continuous variables as mean (Standard deviation, SD) or median (minimum-maximum) as appropriate. The Chi-square test or Fisher’s exact test was used for comparison between categorical variables. Student t-test or Mann Whitney U test was used to compare continuous variables. Survival curves were shown with Kaplan-Meier graphs. A two-tailed p-value of 0.05 was considered statistically significant. SPSS version 23.0 (SPSS, Chicago, IL) was used for all statistical analyses.

Figure 1. Patients volume according to years.
×

Preoperative demographic data of patients who underwent mitral valve repair are given in Table 1. The most common mitral valve pathologies in the patients were isolated posterior prolapse in 59% (n= 72), bileaflet prolapse in 26% (n= 31), and isolated anterior prolapse in 15% (n= 18), respectively. Echocardiographic data of the patients are summarized in Table 2. Mitral valve repair was performed in 4 of 7 pediatric patients (age range 13-17 years) referred for mitral proplase during the study period. Three of these patients had bileaflet failure with excessive tissue, and one had posterior leaflet prolapse due to chordae elongation. 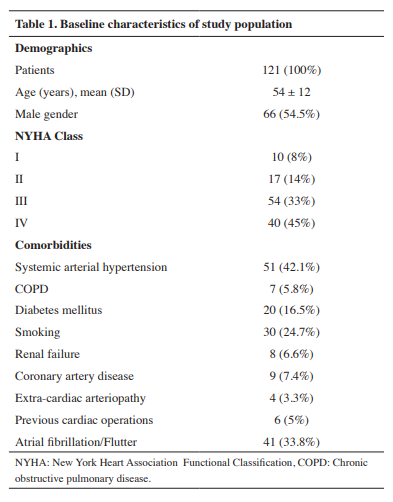 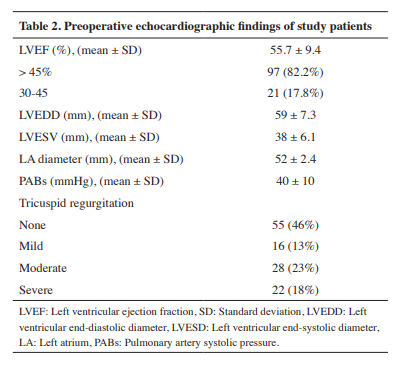 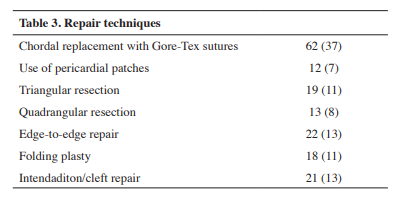 No intraoperative mortality was observed. The median intensive care unit stay was 3 days (1-32) and the median hospital stay was 9 days (7-32). New-onset AF was seen in 26 (21.5%) patients, low cardiac output sydrome in 15 (12.4%), renal failure in 9 (7.4%), and prolonged intubation in 9 (7.4%) patients. Two patients died due to low cardiac output syndrome and one patient died due to complication assosiated with prolonged respiratory failure. Overall hospital mortality was 2.5%. Median followup period of the remaining 118 patients was 63 (range 10-92) months. Moderate-to-severe MR was observed in 14 (11.8%) patients during the follow-up period. Mitral valve reoperation was required in 7 (5.9%) patients. Survival curve of study population (Figure 2), freedom from repair failure (Figure 3), freedom form reoperation (Figure 4) were demonstrated in Kaplan-Meier graphs. The median follow-up period in the pediatric subgroup was 46 (range 32-75) months. Moderate MR was detected in one patient 16 months after the operation. This patient is being followed fully asymptomatically. 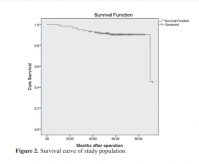 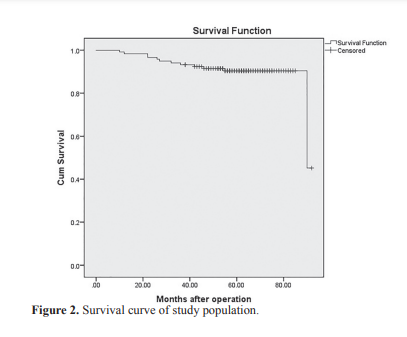 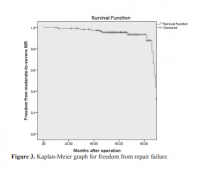 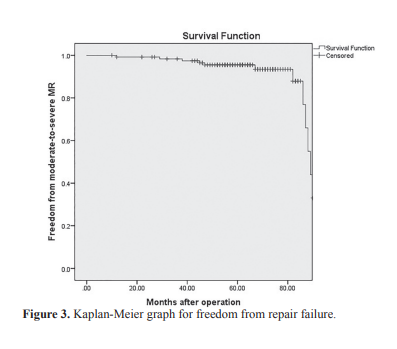 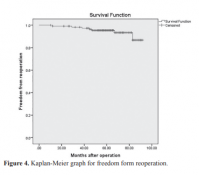 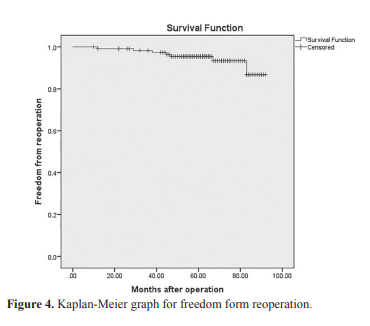 In this study, the early and mid-term results of patients who underwent mitral valve repair due to degenerative mitral valve regurgitation in the first five years of our mitral valve repair program are presented. Although the results of the study reflect to our early experience, overall mortality and mid-term durability seem to be consistent with the international literature. There has been a significant increase in repair rates over the years. In particular, the repair durability of young pateints with mitral prolapse is quite satisfactory.

According to recent The Society of Thoracic Surgeons Adult Cardiac Surgery Database Analysis (36.554 patients, from 2011 through 2016), the rate of mitral valve repair for leaflet prolapse was 82.7%(15). The overall repair rate in our patient group was 79%. There has been a remarkable increase in repair rates over the years (from 60% to 90%). In a significant proportion of degenerative mitral valve patients, mitral valve repair is not a straight forward procedure. For this reasons surgeons should be familiar with different repair methods. We also had to apply more than one repair method at the same time to more than a third of our patients.

There are some specific challenges to the intraoperative management of young patients with mitral valve prolapse primarily because of their size, immature and fragile leaflets and also possible other congenital cardiac abnormalities(16). Recent guidelines have shown that the results of very complex repair in young patients can be similar to those of durable mechanical mitral valve replacement with careful management of anticoagulation(3). Our results, including a limited number of adolescent mitral prolapse patients, show that the rate of durable repairs promise encouraging mid-term results in this group of patients.

This study has several limitations that are inherent due to the retrospective design of the study. First of all, the results of the study are undoubtedly correlated with the learning curve of the surgical team and daily surgical practice. Different valve repair methods came to the fore in different time frames during the study period. Another limitation is the possible lack of standardization in echocardiograms performed in an external center. Despite all its limitations, we think that this study reflects the current scenario of our mitral valve repair patients.

In conclusion, valve repair should be the preferred treatment approach in patients with degenerative mitral valve. It is important to train dedicated mitral heart surgeons in order to achieve the mitral repair success rates in the international literature. Our study shows that satisfactory early and midterm results can be obtained even in the early stages of mitral repair programs created in the modern mitral valve repair concept. Especially in pediatric patients with mitral proplapse, the mid-term results of valve repair are very satisfactory. We believe that sharing experience is important in the training of next generation cardiac surgeons and also the training of mitral valve surgeons.

This study was approved by the Institutional Research Ethical Committee of Kartal Koşuyolu High Specialization Training and Research Hospital (number: 2019.4/7-184).

We would like to thank Prof. Dr. Cengiz Köksal for his mentorship and important contributions to the preparation of this study. Mr. Köksal worked as the Chief of the surgical team during the study period and allowed the presentation of the patients.

Figure 1. Patients volume according to years.
×