Patients and Methods: This single-center retrospective study included patients who underwent cadaveric lobar lung transplantation between December 2016 and December 2018 at our Lung Transplant Center. The procedure was performed only in patients with an emergency status.

Conclusion: Lobar lung transplantation can be a life-saving treatment option in critically ill patients with small thoracic cavities to overcome donor shortage. Furthermore, it is a feasible operative technique in recip- ients with a reduced unilateral thoracic cavity.

Lung transplantation has emerged as a life-saving treatment option for end-stage lung diseases with accumulating surgical experience and improved immunosuppressive therapy, donor care and protection, infection treatment, postoperative follow-up, and medical technology. Survival outcomes have also improved with increasing lung transplants in the recent years. Because of the disproportionate increase in the number of transplant candidates vs. cadaver donor lungs, availability of feasible donors is a challenge. In particular, patients with a small thoracic cavity and end-stage lung disease, such as pulmonary fibrosis and cystic fibrosis, experience long waiting times for appropriately sized donor lungs. Cadaveric lobar lung transplantation can be a life-saving option for such patients with worsening or critical conditions.

This single-center retrospective study included cadaveric lobar lung transplants performed between December 2016 and December 2018 at Kartal Kosuyolu High Specialization Training and Research Hospital, Istanbul, Turkey. Lobar lung transplantation was performed in patients with a small chest wall cavity with a deteriorating condition that precluded waiting for an appropriately sized donor lung. Furthermore, it was performed unilaterally owing to a decreased thoracic cavity volume because of underlying disease or previous lobectomy (Figure 1).
Patients with end-stage lung disease were listed for lung transplantation according to the consensus document for the selection of lung transplant candidates of the Pulmonary Transplantation Council of the International Society for Heart and Lung Transplantation(5). Demographic characteristics, preoperative patient data, intraoperative data, length of intensive care unit stay, and primary graft dysfunction (PGD) and survival data of the patients were recorded. All data were recorded prospectively and retrospectively analyzed. PGD was defined according to the 2016 report of the International Society for Heart and Lung Transplantation Working Group on PGD(6). 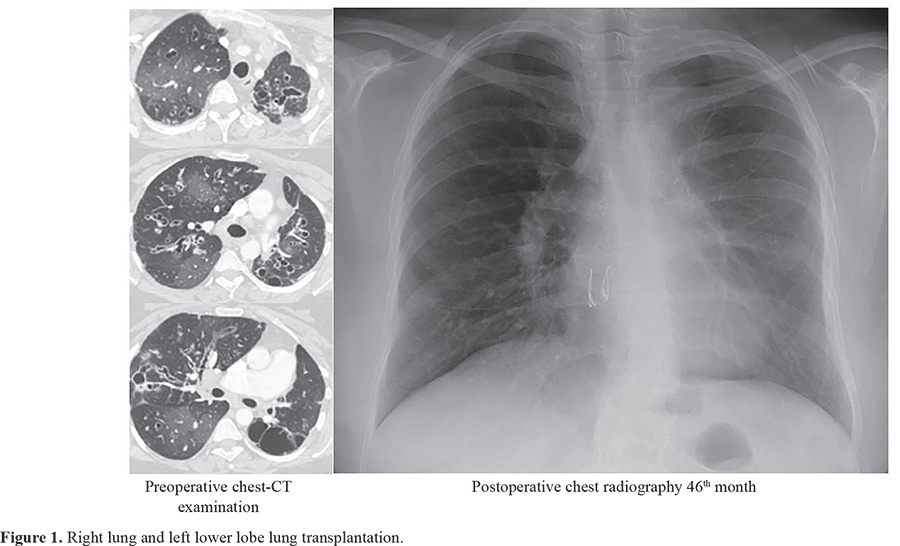 The total lung capacity (sr-TLC) of the transplanted lung was calculated as follows:

Donor lobectomy was performed on the back table. On the right, an upper lobectomy was performed to transplant the middle and lower lobes. The oblique fissure was dissected, and the interlobar pulmonary artery was prepared. The upper lobe vein was cut to preserve the atrial cuff covering both the right upper and lower veins. The upper part of the oblique fissure between the upper and lower lobes and the horizontal fissure between the upper and middle lobes were separated using a stapler. The branches of the upper lobe of the pulmonary artery were dissected and cut. Bronchial transection was performed on only one ring of the middle lobe and the apical segment bronchus of the lower lobe in the distal part of the intermediary bronchus. Care was taken to protect the peribronchial connective tissue. An aortic graft obtained from the donor was used when atrial anastomosis was required to expand and preserve venous flow from the middle lobe in the donor. A sufficient length of the proximal donor pulmonary artery was maintained sufficiently to allow anastomosis without any tension.

An upper lobectomy was performed to transplant the left lower lobe. The fissure was prepared, and the bridge between the upper and lower lobes was cut with a stapler. The interlobar pulmonary artery was dissected. The lingula artery and the branches of the upper lobe were dissected and cut. The upper pulmonary vein was ligated and cut. The atrial cuff was preserved. The left lower lobe bronchus was cut at the bronchial bifurcation level, and the apical segment bronchus of the lower lobe was preserved to allow anastomosis.

In our clinic, indications for the use of intraoperative central venoarterial extracorporeal membrane oxygenation (C-VA-ECMO) were hypercapnia (PaCO2 > 55 mmHg), arterial saturation < 85%, cardiac index < 2 L/min/m2, and mPAP > 40 mmHg. C-VA-ECMO was used for intraoperative cardiopulmonary support by cannulating the right atrial auricle and the ascending aorta. A 15-19 French (Fr) arterial cannula was used for the aorta, and a 2-stage venous cannula or a 36 Fr curved- tip cannula was used for the right atrium. C-VA-ECMO was performed after unilateral pneumonectomy, without considering the aforementioned criteria, during bilateral lower lobe transplantation. Whole-lung and unilateral lobar transplantation were performed in cases with a unilateral small thoracic cavity. In the case of unbalanced lung perfusion, pneumonectomy of the less-perfused lung was first performed. After strict bleeding control, C-VA-ECMO support was initiated. C-VA-ECMO was gradually weaned and terminated after the implantation of both lungs. C-VA-ECMO support was discontinued in patients who were hemodynamically stable and had the following arterial blood measures: PaO2 > 70 mmHg, PaCO2 of 35-50 mmHg, tidal volume of 6-10 mL/kg, positive end-expiratory pressure within acceptable limits (10 cmH2O), and low pulmonary artery pressure without right ventricular failure.

Between December 2016 and December 2019, 55 patients underwent lung transplantation, of which 6 (10.9%) underwent lobar transplantation from deceased donors. Of the six patients, four were female and two were male; their median age was 35.3 years (range, 22-42 years). The primary diagnoses among the patients were bronchiectasis (three patients), chronic obstructive pulmonary disease (one patient), cystic lung disease (one patient), and lepidic type adenocarcinoma (one patient). ECMO was used a bridge to lung transplantation in one patient. The mean resting O2 flow rate was 5.6 L/min (range, 4-10 L/min) during the pre-transplant examination for lung transplantation feasibility. Hypoxemia (PaO2 < 60 mmHg) and hypercarbia (PaCO2 > 45 mmHg) were observed in all and four patients, respectively, on blood arterial gas analyses. Pulmonary function tests could not be performed in four patients. Four patients did not achieve maximal exercise capacity during the 6-minute walk test (6MWT). Right ventricular dilatation was seen in three patients; the mean tricuspid annular plane systolic excursion value was 20 mm (range, 15-26 mm) on echocardiographic examination. Pulmonary hypertension was observed in three patients, as measured using right heart catheterization with the patient supine and at rest (Table 1). 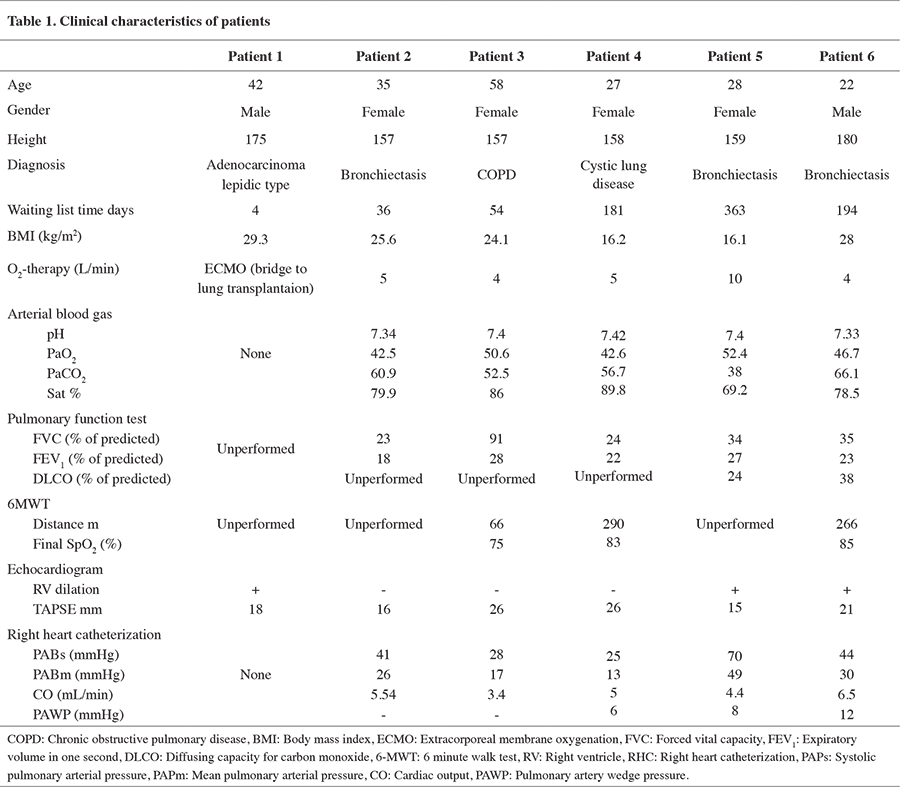 The cause of donor brain death was intracranial hemorrhage in two patients and head trauma in four patients. The mean oxygenation index [partial pressure of oxygen (PaO2) at a positive end-expiratory pressure (PEEP) of 5 mmHg and fraction of inspired oxygen (FiO2) of 1.0] at the time of organ offer was 384 (range, 269-480). The mean mechanical ventilation time was 4.16 days (range, 2-9 days). Three donors had a history of smoking (> 20 packs/year; Table 2). The pTLC of the donor was between 76% and 114% of the pTLC of the recipient. The donor-recipient sex match was male to female in three patients, female to female in one patient, female to male in one patient, and male to male in one patient (Table 3).
The mean waiting time was 139 days (range, 4-363 days). The lobar lung transplantations performed were bilateral in two patients, whereas two patients received the right single lung and left lower lobe and two patients received the left single lung and right lower lobe transplant. All transplantation was performed with C-VA-ECMO support. ECMO as a bridge
to lung transplantation was used in one patient. The mean mechanical ventilation duration and intensive care unit stay were 4.5 days (range, 1-4 days) and 7.8 days (range, 4-20 days), respectively. The mean red blood cell, fresh frozen plasma, and pooled platelet units transfused peri- and post-operatively were 11.3 units (range, 6-21 units), 9.5 units (6-11 units), and 1.3 units (0-3 units), respectively (Table 4). 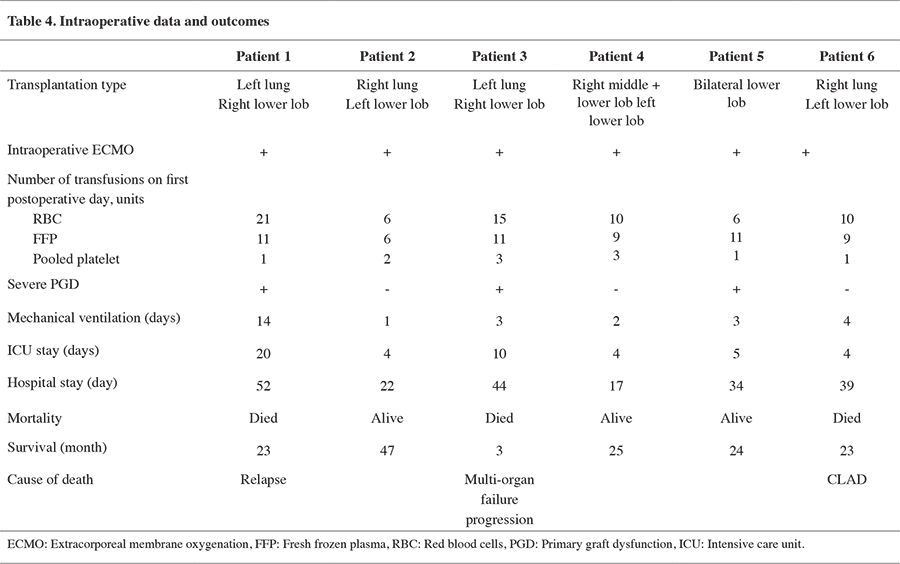 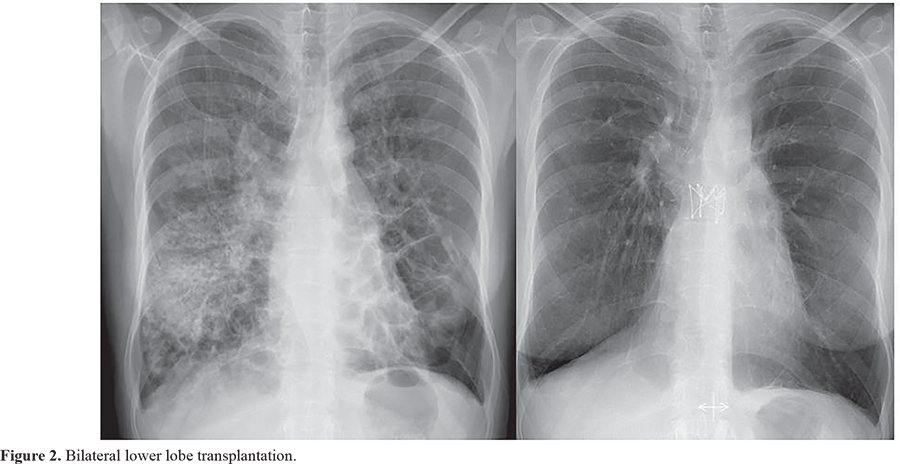 Despite the recommendations of the Pulmonary Transplantation Council of the International Society for Heart and Lung Transplantation, in our experience, patients with end-stage lung disease were not referred at the optimal time and were listed for lung transplantation despite significant deterioration in respiratory function. Most patients were already on long-term oxygen therapy, had pulmonary hypertension, and were unable to perform pulmonary function tests and the 6MWT(5). Owing to the deteriorating condition, insufficient time to identify a suitable donor was available in all patients, leaving the use of an oversized lung graft by lobectomy as the only option to prevent waiting list mortality. The Toronto Lung Transplant Group, one of the most experienced teams, has performed lobar lung transplantation in 4.5% of all standard lung transplantations(8). In our study, the ratio of lobar lung transplantation was 10.9%. This high ratio could be attributed to a high number of critically ill patients and the small number of waitlisted patients. Another reason could be that most patients had underlying diseases, such as bronchiectasis, that caused unilateral lung volume loss.

Selecting between wedge resection or anatomic lobectomy in case of unexpected size mismatch during the procedure is challenging. Loizzi et al. compared patients who underwent standard lung transplant with those who underwent lobar lung transplant. They concluded that the upper limit for the donor to recipient pTLC ratio should be 1.15-1.20, with a definite preference for lobar transplantation when the ratio is > 1.20(9). Lobectomy can be performed on the back-table or after implantation to reduce size. Using back-table lobectomy can help reduce ischemia time as it can be performed by a separate surgeon concurrently with recipient preparation and prevents impaired visibility of the hilum because of the large lung thoracic cavity, this preventing mismatch. Another benefit of back-table lobectomy over post-implant lobectomy is that a bronchial stump is not required. However, performing back-table lobectomy poses technical challenges as dissection becomes difficult owing to the lack of blood circulation in the vessels, whereas post-transplant lobectomy may be challenging because of the large size of the lung within a small chest cavity. Another disadvantage of post-implantation lobectomy is that the manipulation of the recently perfused lung may cause reperfusion injury, which may cause further damage to the transplanted lung.

Lobar lung transplantation candidates are at higher risk owing to hemodynamic instability because of their poor general condition during the perioperative reperfusion phase. Perioperative management for lobar lung transplant recipients differs from that for standard lung transplant recipients. After implantation, the implanted lobe receives almost all the cardiac output during the remnant native lung pneumonectomy. This excessive increase in pulmonary circulation causes increased pulmonary pressure and extravascular fluid leakage and eventually, pulmonary edema. Cardiopulmonary bypass or ECMO support is recommended during the procedure to prevent overloading of the pulmonary vascular bed(10). Peripheral or central venoarterial ECMO, which requires less heparin and provides thoracic epidural analgesia, has replaced CPB(11).

This study has several limitations. This was a retrospective, single-center study. A control group was absent. Owing to our limited experience with patients undergoing lobar lung transplantation in Turkey, our sample size was limited. Regardless of the limitations, in our experience, lobar lung transplantation is a life-saving treatment option for critically ill recipients with small thoracic cavities, particularly those with cystic fibrosis and pulmonary fibrosis. Furthermore, it is a feasible surgical technique in recipients with a reduced unilateral thoracic cavity.