Atrioventricular septal defect (AVSD) is a congenital heart disease involving the atrioventricular valves, the inlet part of the interventricular septum and the primum part of the atrial septum to varying degrees. Among congenital heart diseases, AVSD is seen with a frequency of 2.9% and approximately 25% of them are partial type AVSD(1). If there is no symptom in partial AVSD, corrective surgery at an early age is recommended at preschool age but if there are signs of congestive heart failure due to severe left atrioventricular valve insufficiency and atrial shunt(1-3). Atrioventricular block requiring pacemaker, significant mitral valve insufficiency (MR), left ventricular outflow tract obstruction (LVOTO) may occur after surgery, and patients may need to be operated again(3).

In our study, we aimed to present long-term results by evaluating the data of patients with partial and intermediate type AVSD who were operated at Baskent University Medical Faculty Hospital between 1996 and 2016.

Statistical analysis were performed using the “Statistical Package for the Social Sciences software (version 20 for Windows; SPSS, Chicago, IL, USA)” program. T test and analysis of variance (ANOVA) were used for comparisons of mean between groups, and Chi-square test was used to compare categorical variables. For the reoperation risk factor significance, cox regression analysis was used. Statistically, a p value of < 0.05 was considered significant. 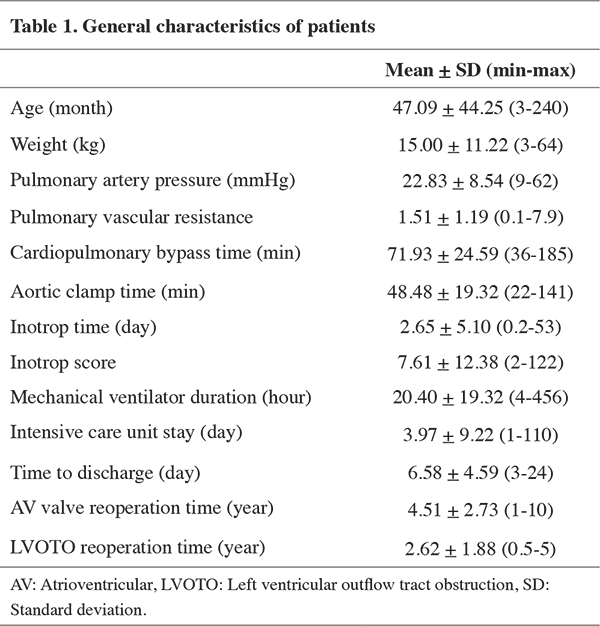 Postoperative infections, confirmed by blood, urine, or tracheal aspirate cultures, were seen in 7.8% of the patients. Postoperative complete AV block developed in 21 patients (11.8%), of which only five patients had permanent AV block and pacemaker was implanted. Late morbidity (> 1 month) was 17% (27 patients), and late mortality was 1.2% (two patients). The most common late morbidity reasons were MR, left ventricular outflow tract obstruction (LVOTO) and reoperations performed for this reason (15.2%).

Valve surgery was performed in 21 patients (11.8%) due to significant MR. Mitral valve repair was performed in 7 patients (3.9%) and mitral valve replacement in 14 patients (7.9%). Nineteen of these patients had partial defects and two of them were intermediate type. Postoperative LVOTO developed in nine patients and 4 (2.2%) of these were operated. All of these patients were those who were repaired with partial type and pericardial patch. It was observed that two patients had undergone reoperation for both valve and LVOTO. The mean time for reoperation for MR was 4.48 + 2.65 (1-10) years, and for LVOTO was 2.62 + 1.88 (0.5-5) years.

In terms of reoperation for left AV valve and LVOTO, no significant risk factor was found for reoperation in the analysis performed by determining the absence of down syndrome, surgery age and weight, mitral insufficiency before and after surgery, type of AVSD, surgical technique, not closing the cleft, as risk factors.

Comparison of Patients with and Without Down Syndrome

Patients with and without Down’s syndrome, gender, age of surgery, body weight during surgery, AVSD type, preoperative pulmonary artery pressure (PAP), preoperative and postoperative MR degrees, cardiopulmonary bypass (CPB), aortic clamp times, intensive care inotrope score, the durations of mechanical ventilation were compared in duration of stay in the intensive care unit, duration of discharge, postoperative AV block and infection, early mortality and morbidity, late mortality and morbidity, reoperations due to valve or LVOTO (Table 2). It was observed that patients with down syndrome had more postoperative infections (p= 0.038). While reoperation was required in patients who did not have down syndrome due to MR and LVOTO, it was determined that patients with down syndrome did not undergo reoperation (p= 0.013). There was no significant difference between the groups in terms of other parameters.

Table 2. Comparison of down and not affected by down syndromes patients
× 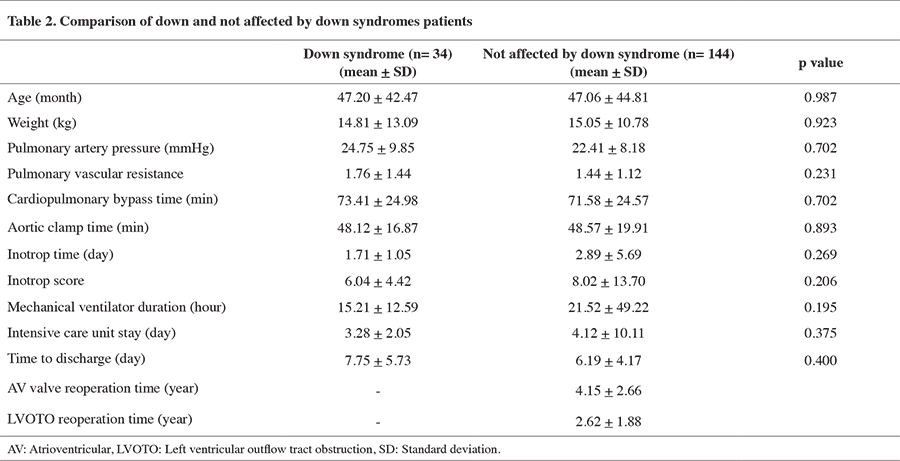 Patients were grouped according to the surgical techniques and compared according to the same parameters. Preoperative MR of the patients who underwent annuloplasty was higher than the others (p= 0.008) and the discharge time of these patients was shorter (p= 0.008). Intermediate type AVSD was operated with the Wilcox technique, these patients were found to have higher preoperative PAP (p= 0.001) and PVR (p= 0.001), early morbidity higher in this group (p= 0.003), and more hospital stay (p= 0.008). There was no significant difference between groups in terms of other parameters (Table 3). 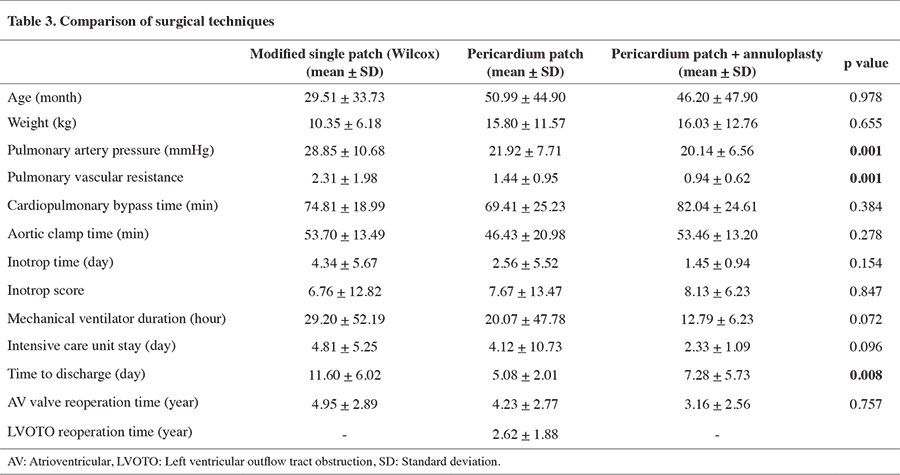 In the previous years in partial type AVSD, if there are no signs of heart failure, it was recommended to perform all correction surgery at preschool ages, but nowadays, it has been shown that the results of surgery are better at earlier ages(2,6- 9). Many centers prefer the age of three to four years as the age of surgery due to lower surgical complications. However, Devlin et al. did not find an increase in early mortality, left AV insufficiency or stenosis, pacemaker need, need for reoperation for AV valve or LVOTO in patients who underwent early repair around the median 1.5 years in their series, and they recommended surgery around the age of two years(8).

Although early mortality is low in atrioventricular septal defects, the main problem is the high rate of reoperation due to left AV valve insufficiency and/or LVOTO. The reoperation rate for AVSD has been reported as 6-28%(2,7,8,10). The most common cause of reoperation is AV valve insufficiency and its frequency is 5-19%(2,11). Moderate or severe left AV valve insufficiency in the early postoperative period causes reoperation(2,7,11-14). Bove et al., stated that left AV valve insufficiency was caused by technical deficiencies such as separation of the cleft suture or incomplete cleft closure, or insufficient repair caused by not clear recognition of the morphological anomalies of the valve(11). Anatomic residual lesions of the left AV valve are common causes of reoperation in children with partial AVSD. The most common anomalies; anomaly adhering chordae and/or additional papillary muscle anomalies are asymmetric development of one of the superior leaflets. Subvalvular apparatus anomalies of the valve are also common in partial AVSD(11,13). Therefore, surgery in partial AVSD should be performed before these secondary fibrotic changes begin, and it is preferably recommended before two years of age(8,11). Failure to close the cleft in the left AV valve causes significant valve insufficiency in the postoperative period(2,14,15). Kleft closure and postoperative annular dilatation are the most important factors affecting the results of valve repair(14,15). Palada et al. recommended ring-shaped reduction with cleft repair to reduce reoperation rates and prevent long-term valve insufficiency(15). The reoperation rate was 11.8% in our patients due to left AV valve insufficiency. It was observed that 92.1% of the patients had cleft closed during surgery. However, no difference was found between surgical techniques in terms of postoperative mitral insufficiency and reoperation. In our patient group, preoperative and postoperative MR, keeping the cleft open were not found as risk factors for reoperation for the left AV valve. Left ventricular outflow tract obstruction is the second most common cause of operation in AVSD and its frequency is reported as 1-10%(3,8,16-19). Since the aortic valve is located in front and to the right in AVSDs, it cannot be placed between the AV valves normally. The LVOT is longer and its distal part is narrower. Elonge and abnormal angled LVOT and various intrinsic anomalies facilitate the formation of stenosis. The abnormal AV valve and subvalvar apparatus anatomy also greatly affects the LVOT geometry. Abnormal adhering AV valve chordates and accessory fibrous bands also cause stenosis. Due to these anatomical features in AVSD, LVOT stenosis may develop at many different levels after surgery(3,8,16-19).

Although the modified single patch technique was held responsible for LVOTO in the past, many publications have shown that it is not related(16-20). In this study, we compared surgical techniques and types of AVSD in terms of LVOTO development, and we found no statistically significant difference. Again, there was no statistically significant difference between surgical techniques and types of AVSD between reoperation for AV valve and LVOTO. In previous studies, it was reported that there was no difference between AVSD types in terms of reoperation frequency due to AV valve and LVOTO(13,15). However, in our study in which we compared partial and complete AVSD, we reported that postoperative valve insufficiency and therefore the rate of reoperation were high in partial AVSD(21). Since patients with down syndrome have a higher tendency to pulmonary vascular reactivity and respiratory complications, the postoperative period of mechanical ventilation is longer, the risk of infection is higher, and the duration of intensive care stay is longer(22,23). However, in many studies, down syndrome was not found as a risk factor for operative mortality. Mortality rates are the same as patients without down syndrome, reoperation rates were lower(23-25). We also found that patients with down syndrome had significantly more infections in the postoperative period. However, no difference was found between inotrope score, mechanical ventilator, intensive care and discharge times. There was no reoperation in down syndrome patients due to AV valve insufficiency or LVOTO.

Postoperative early mortality of partial AVSDs is low, but the reoperation rate is high in the late period due to left AV valve insufficiency and LVOTO. All correction surgery should be performed at the age of two years without delay and close monitoring should be performed in terms of the need for reoperation.

Table 2. Comparison of down and not affected by down syndromes patients
×