Thrombosis of the renal artery is an uncommon condition that results from obstruction or decrease of renal arterial flow by a thrombus. That may result in irreversible damage to the renal parenchyma and leads to renal infarction.

Many risk factors are known to favor but atrial fibrillation is currently considered the most important risk factor for this condition(1). Patients mostly present with abdominal and/ or flank pain, uncontrolled hypertension(2). Laboratory findings include an increase in lactate dehydrogenase level, an increase in C-reactive protein level, and renal impairment.

Thrombosis of the renal artery can mimic many other pathological conditions, including acute abdomen, renal colic, pyelonephritis, rupture of aortic aneurysm, pulmonary embolism, and more(3). It is important to make a differential diagnosis and proceed with an optimal diagnostic workup for preventing kidney damage. Although percutaneous interventions and thrombolytic treatments have proven beneficial, there is no clear treatment strategy. In this report, we reported a patient that was suggested nephrectomy at the referred hospital was diagnosed with right renal artery embolism. We applied thrombolytic treatment with percutaneous intervention as a salvage therapy.

A 63-year-old man was referred from another hospital to our hospital. The patient was admitted with right flank pain and nausea. Physical examination revealed tenderness and side pain in the right abdomen. He had elevated blood pressure that was resistant to anti-hypertension drugs. The patient had atrial fibrillation and was not using oral anti-coagulation drugs. The patient had diabetes mellitus using subcutaneous insulin. Laboratory tests revealed an increase in creatinine value, C-reactive protein level, lactate dehydrogenase level. His blood count test was revealed elevated white blood cells with neutrophils dominance. The patient has performed a computed tomography (CT) with an intravenous contrast agent at the referred hospital. The CT was showed that the left renal hypoperfusion and a suggestive image of thrombus in the left renal artery (Figure 1). The echocardiography revealed normal left ventricle functions with no sign of intracardiac thrombus. Nephrectomy was suggested to the patient at the referred hospital. Because of the persistent pain and worsening of renal functions, we decided to do a renal angiography for considering percutaneous therapeutic options. Renal angiography showed that the left mid segmentary artery was occluded. The right main renal artery was obstructed and dense thrombus filled (Figure 2A). Percutaneous intervention and a thrombolytic decision were taken. 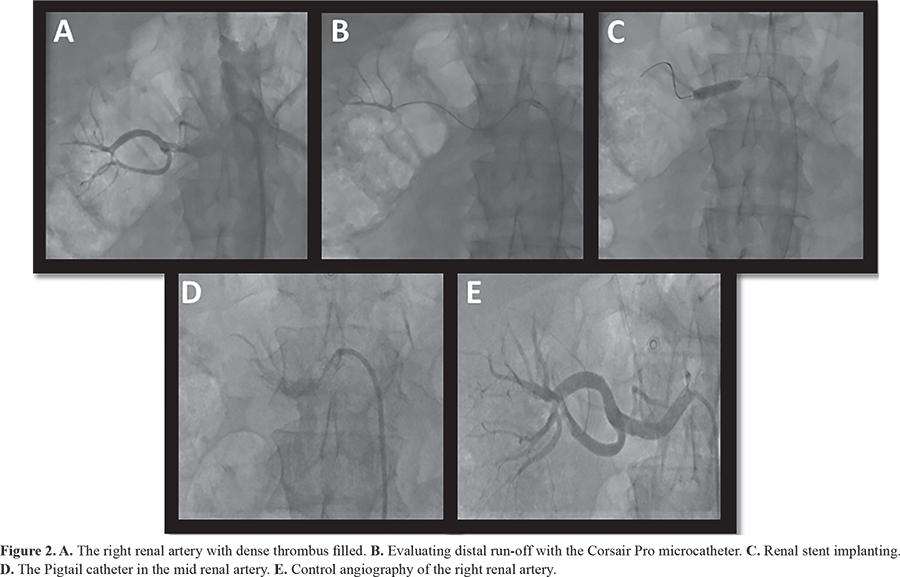 We planned to apply intraarterial thrombolytic into a dense thrombus filled with the right main renal artery. For engagement to the right main renal artery internal mammary, right, and a renal catheter was used respectively. 8 Fr renal catheter was engaged to the right main renal artery. Then the obstructed segment was passed with a soft guidewire (Asahi- Japan). The catheter engagement wasn’t enough. To evaluate the distal run-off and for better catheter engagement, a Corsair Pro microcatheter (Asahi-Japan) was inserted through the renal catheter. An adequate distal run-off was observed (Figure 2B). The guidewire was changed with Grand Slam guidewire (Asahi- Japan) for better engagement. Besides a second Grand Slam guidewire was inserted into distal to support for engagement. With 2.0 x 20 mm and 3.0 x 20 mm percutaneous transluminal coronary angioplasty (PTCA) balloon catheter, the obstructed lesion was pre dilated. Because of the distal flow was decreased, 5.0 x 20 and 5.0 x 30 mm balloon catheter was also inflated. For better catheter engagement, we decided to implant a stent in the renal artery. With that, we could insert the catheter into the mid renal artery via stent support. 5.0 x 18 renal stent (Boston Scientific-USA) was implanted into the distal region (Figure 2C). A second 5.0 x 18 mm renal stent (Boston Scientific- USA) was implanted into the proximal with overlapping to the first one. Upon no re-flow was observed, the in-stent regions were dilated with balloons again. A weak distal flow filled with thrombus was observed. As the 5.0 x 20 mm balloon was inflated into the distal stent, A 4 Fr Pigtail catheter was inserted into the mid renal artery region on through the second Grand Slam guidewire (Figure 2D). There were no contraindications for applying a thrombolytic agent. Bolus 10 mg tPA (Tissue Plasminogen Activator-Alteplaz) was applied then 1 mg per hour slow infusion was started through the Pigtail catheter. The infusion was continued for 24 hours. During tPA infusion, the patient experienced a slight improvement in the flank pain. When the tPA infusion was finished, an unfractionated heparin infusion was started. Control renal angiography was performed after 24 hours when the tPA infusion was stopped. Renal stents were open with good distal flow (Figure 2E). The patient was well and symptom-free after the intervention and did not need hemodialysis. His renal functions improved; his creatinine value and lactate dehydrogenase levels decreased progressively. The patient was discharged five days after the intervention with warfarin and clopidogrel treatment.

The renal artery thrombosis is a relatively rare clinical entity. Clinical findings are often nonspecific and can mimic many other pathological conditions. The delaying of the diagnosis may cause irreversible renal parenchymal damage that leads to end state renal disease and also death(4).

Domanovits et al. suggested that for all patients presenting with the triad; high risk of a thromboembolic event, persisting flank/abdominal/back pain, elevated serum levels of lactate dehydrogenase and/or hematuria within 24 hours after pain onset, CT should be performed to detect possible renal infarction or other abdominal lesions(5). Our patient had diabetes mellitus, hypertension, and atrial fibrillation without anticoagulant treatment. We considered that renal artery thrombosis is most likely related to atrial fibrillation. Atrial fibrillation was found to be the most frequent etiologic factor for renal infarction due to thrombosis of the renal artery in case series and reports(1,3,6).

The treatment strategy for renal emboli is unclear. The strategy depends on several factors; the time between the onset of clinical symptoms and diagnosis and the underlying causes. Some case studies have demonstrated that medical management with anticoagulants or intravenous or intra arterial thrombolytics is feasible(4,5). Response to thrombolytic therapy may be related to the duration from initial symptoms and signs to a definitive diagnosis(2). Nephrectomy was suggested to the patient at the referred hospital. Because of our patient was complaining of persistent right flank pain and nausea with an increase in creatinine value and a decrease in diuresis, we thought that the renal ischemic process may benefit from invasive strategy and thrombolytic therapy.

During the procedure, catheter engagement was challenging and prolonged the procedure time. Evaluating the distal run-off in a dense thrombus filled artery was important for the renal artery patency and the success of the thrombolytic procedure. We decided to apply catheter-directed intraarterial thrombolytic. After the failure of several attempts to insert the catheter because of a lack of support, we implanted a renal stent to better engage and support. As predictable, renal stent implantation wasn’t enough for the flow patency in this thrombus dense condition alone. Subsequently, we decided to apply catheter-directed intraarterial thrombolytic. Because of the lack of enough support and catheter engagement, during a 5.0 x 20 mm balloon was inflated into the distal stent, the Pigtail catheter was inserted into the mid renal artery region on through the second grand slam guidewire. For providing effective and safe thrombolysis, we performed ultraslow thrombolytic therapy which is documented most commonly in the treatment of prosthetic valve thrombosis via the Pigtail catheter(7). We applied a bolus 10 mg tPA before the infusion. Since an acceptable outcome in renal functions was achieved, the patient was discharged with clopidogrel and warfarin to prevent recurrent embolism due to atrial fibrillation.

Although the treatment strategy for the renal artery embolism is unclear and depends on the admission time and the underlying reason, we successfully applied catheter-directed intraarterial ultra-slow thrombolytic infusion to the patient that was suggested nephrectomy at the referred hospital. The procedure was challenging due to catheter engagement issues so that we also applied the renal stent. That kind of invasive treatment strategies can be applied at experienced centers. Before suggesting nephrectomy, it is important to consider invasive interventions and thrombolysis according to the clinical condition of the patient. The patient may benefit from percutaneous strategy and thrombolysis with better outcomes.

The authors declare that this study has received no financial support.