Introduction: The aim of this study was to assess the relation between the diameter and collapsibility of the inferior vena cava (IVC), other markers, clinical variables and in-hospital mortality in patients hospitalized with severe acute decompensated heart failure (ADHF).

Patients and Methods: An observational prospective study was conducted that included patients hospitalized with severe ADHF from April 2019 to March 2020. Inferior vena cava collapsibility index (IVCCI) was measured during the first 12 hours at admission. The endpoint was in-hospital mortality.

Results: Two hundred thirty one patients hospitalized for ADHF, 28 (12.1%) of them died during hospitalization and formed non-survivors group. There were significant difference between non-survivors and survivors in case of IVVCI (21.25 ± 5.6 vs. 36.2 ± 18.3; p= 0.01 respectively). According to multivariate analysis IVCCI remained independent predictor of in-hospital mortality (p< 0.05). An IVCCI less than 23 predicted in-hospital mortality with 69% sensitivity and 75% specificity.

Conclusion: In patients hospitalized with acute decompensated heart failure, a low IVCCI by 2D echocardiography at the time of admission is associated with a higher in-hospital mortality.

Acute decompensated heart failure (ADHF) is a sudden and progressive worsening syndrome of heart failure (HF), which is characterized by exacerbation of HF signs and symptoms resulting in the need for urgent treatment with hospitalization. ADHF constitutes a complex clinical syndrome, representing a broad spectrum of diseases and statuses with heterogeneous clinical presentations. ADHF poses a unique medical burden of high morbidity and mortality. The continued high mortality rate for patients hospitalized with ADHF provides a compelling indication for accurate risk stratification for potentially improving individual management and hospital outcome.

In patients admitted due to ADHF, the degree of congestion is of prognostic relevance(1). Congestion is defined as elevated left ventricular filling pressure and further subclassified in hemodynamic and clinical congestion depending on the absence or presence of clinical signs and symptoms of congestion(2). According to a scientific statement of the European Society of Cardiology, the reference standard for evaluation of hemodynamic congestion is cardiac catheterization to measure right atrial pressure (RAP) and pulmonary capillary wedge pressure (PCWP)(2). However, the routine use of cardiac catheterization is limited due to its invasive nature, other markers of decongestion are needed in order to guide physicians during decongesting therapy. Based on this, echocardiography guidelines recommend ultrasound assessment of the inferior vena cava (IVC) to estimate RAP(3). Considerable efforts have been made to stratify patient risk in order to identify patients with a poor prognosis in whom closer surveillance or more intense treatment might improve outcome or to identify potential mechanisms driving outcome that might be targets for therapy. Published data from studies indicate that IVC dilation and collapsibility may be associated with early readmission and all cause mortality after hospitalization in patients with ADHF(4-6). In this study we assessed the importance of IVC measurements as a marker for in-hospital mortality other than all cause mortality in severe ADHF patients.

A comprehensive echocardiography was performed during the first 12 hours of admission by an expert cardiologists who were not involved in the treatment of the patients. Conventional two-dimensional echocardiography was performed using commercially available equipment (Vivid 7, General Electric Vingmed Ultrasound, Horten, Norway) with a 2.5 MHz transducer. Left ventricular ejection fraction (LVEF) was determined by the biplane Simpson’s method. The measurement of IVC diameters were performed with the patient in the supine position head elevated 30 degrees(8). The transducer was placed in the subxiphoidal region, and long and short axis views of the IVC were obtained just below the diaphragm in the hepatic segment. IVC diameters were measured within 2 cm from the right atrium; the minimum diameter was obtained during full forced inspiration, whereas the maximum diameter was obtained during expiration. The inferior vena cava collapsibility index (IVCCI) was determined by the ratio of the minimum and maximum diameters of the IVC according to the following formula(9): IVCCI= (maximum diameter of the IVC-minimum diameter of the IVC)/(maximum diameter of the IVC).

Statistical analyses were performed using SPSS 20.0 statistical package (SPSS Inc., Chicago, IL). Categorical variables (demographics and comorbidities) were given as counts and percentages. Continuous variables and IVC measurements were given as means with standard deviations, Kolmogorov- Smirnov tests were used to compare continuous variables between groups. The Student’s t-test and Mann-Whitney U test was employed to compare continuous variables, the chi-square or Fisher’s exact test was employed to compare categorical variables, and Pearson’s correlation test was employed to evaluate the relationship between pairs of continuous variables. Cox proportional hazards analysis was conducted to assign the independent risk factors for in-hospital mortality. Optimal cut off values for IVCCI for in hospital mortality prediction were determined by establishing receiver operating characteristic (ROC) curves and calculating the area under the curve (AUC) for distinct IVCCI diameters. Survival was analyzed using the Kaplan-Meier (K-M) method using cumulative survival curves with the log-rank (Mantel-Cox) test. p< 0.05 was considered to be statistically significant. 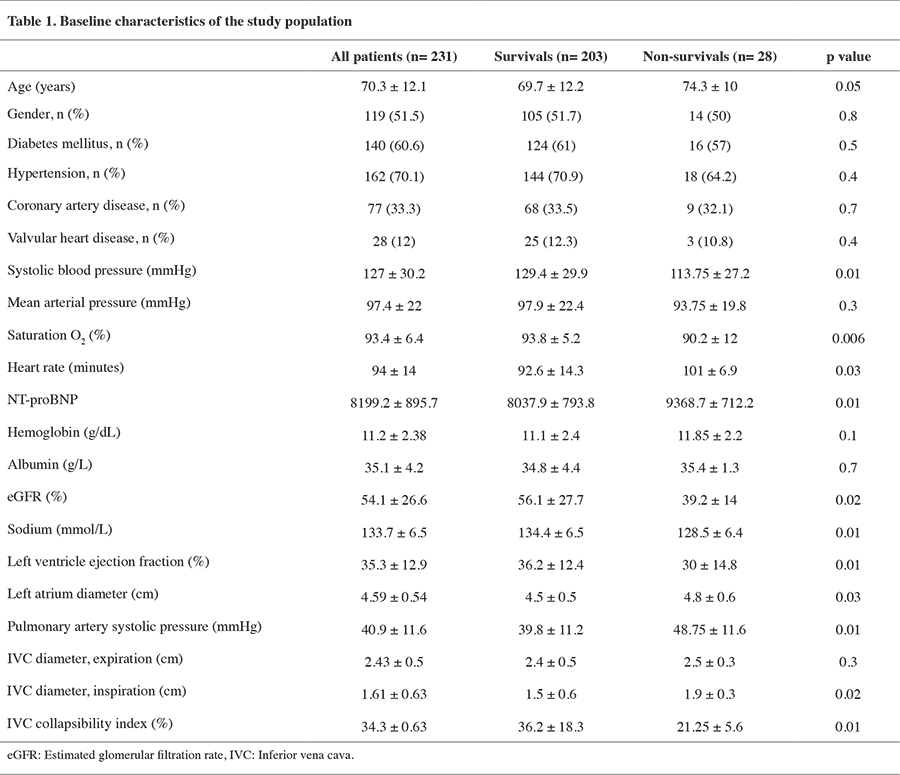 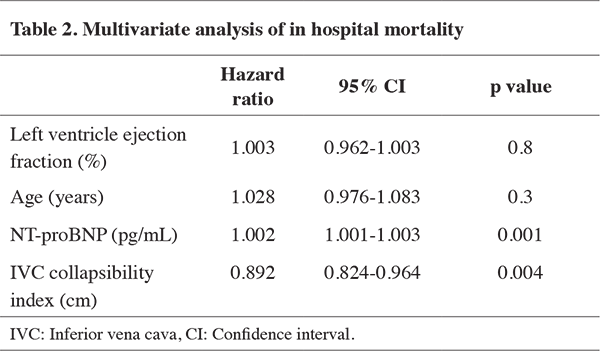 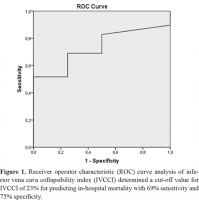 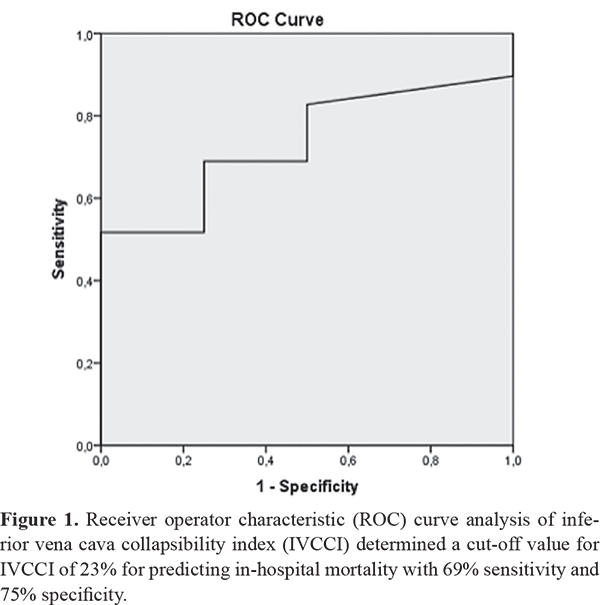 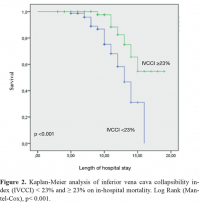 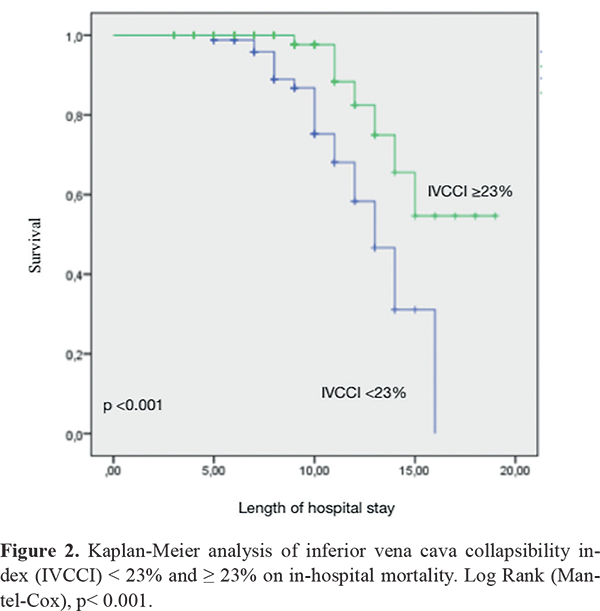 Our study found that a depressed IVCCI at admission is associated with a poor prognosis after hospitalization for severe ADHF. Patients with an IVCCI less than 23% at admission had higher in-hospital mortality.

The IVC diameter is a brief assessment of cardiac function, also a sign of venous congestion. Systolic or diastolic left ventricular dysfunction ends up left atrial hypertension, the pressure is delivered back across the pulmonary circulation to result in pulmonary arterial hypertension that combines any preexisting dysfunction of right ventricle and aggravates tricuspid regurgitation(11). RAP and IVC distension increases as consequence of these stresses. If congestion is the hallmark of ADHF, then distension of the great veins may be the best indication on imaging. IVCCI can appropriately be used to estimate RAP semiquantitatively(3). We have shown that IVC dilated and the attenuated IVCCI is incorporated with a worse prognosis of in-hospital mortality in ADHF patients.

Despite the crucial role of physical examination, physicians are becoming less skilled at physical examination and dependent on modern technology(12). It is noteworthy that the IVC status can be accurately evaluated by a novice in imaging, whereas elevated jugular venous pressure (JVP) is not easily identified even by experienced cardiologists(13-15). Therefore, IVCCI assessment may be a plausible alternative for JVP in estimating RAP, treatment inducement, and prediction of outcomes, and for patients two-dimensional echocardiography performed routine measurement of IVCCI is legitimate.

The IVC assessments is usually simple to perform in patients with HF and has low inter-observer alteration. Instead of invasive catheterization and complications such as air embolism, pneumothorax, or injury of great vessels, when echocardiography is available, IVC measurements may supply similar data in HF patients(16,17). Of note, IVCCI assessment can be a reasonable representative for jugular venous pressure regardless of the presence of ADHF in the diagnosis and prognosis.

In patients with HF, RAP elevation as predicted by the IVCCI was outstandingly associated with poor clinical outcomes, the IVCCI estimated the regulation of diuretics more precisely than clinical examination(18,19). Also, a recent study showed IVCCI could be used for selection of diuretic strategy(20). These point out the clinical practicality of the IVCCI regardless of its relationship with RAP in HF.

There is no research directly examining in-hospital mortality and IVCCI correlation in ADHF patients. Ours is the first study to investigate the relationship between IVC measurements and other markers of in-hospital mortality in patients with ADHF. Two recent studies evaluated IVCCI and mortality in hospitalized ADHF patients but as a prognostic marker of combined event of mortality and HF readmission during the 180 days of follow up(6,21). Both concluded a low IVCCI indicative of IVC congestion, as a basic and helpful tool that helps to rapidly and non-invasively stratify the prognosis of these patients in the onset of medical care, and consolidate with adverse outcomes in patients with a wide spectrum of cardiovascular diseases.

Our study demonstrated that in terms of prognosis, the IVCCI < 23% at admission as a response of systemic congestion was associated with an increased possibility of mortality at initial hospitalization. The lack of IVC collapse appears to be more significant than the degree of maximum diameter. Also in our study plasma NT-proBNP levels were predictive of death after hospitalization for ADHF like in previous studies(22). NT- proBNP level is predictive of in-hospital mortality in patients with either reduced or preserved LVEF independent of other clinical and laboratory variables.

There are few important differences with current study and the above mentioned ADHF studies which reinforced the relationship between congestion and the prognosis(6,21). First, all of the present study patients were hospitalized with NYHA functional class III or IV, higher than 47% of Romano et al. and 19% of Laorden et al.(6,21). Second, the predominant HF type in our study was heart failure with reduced ejection fraction, however both of other studies had predominantly patients with preserved ejection fractions. Third our sample size is more than the above mentioned hospitalized ADHF and prognosis IVCCI studies. Consequently relatively high event rate, low IVCCI in outcome patients and predictive levels of NT-proBNP which is inconsistent with prior studies may be explained by these differences.

In our study, in-hospital mortality rate was 12.1% which is higher than studies including hospitalized ADHF patients; 6.7% and 7.6% in the most recent ones, and 3.8% in two well known researches(23-26). In a multi-center, prospective in-hospital mortality assessed study, indicators of outcome included advanced age, low admission SBP and sodium levels, high heart rate, and elevated creatinine levels(26). The higher mortality rates in our study may be because of all hospitalized patients possessed most of these indicators and additionally all being severe ADHF (NYHA functional class III or IV). Esc-HF Pilot study patients had mean 133 mmHg SBP and 88/min HR (127 mmHg SBP and 94/min in our cohort) with only 28% severe ADHF(25). A newly published study reported 7.6% in-hospital mortality having 70% severe ADHF patients with 88/min HR still lower indicator values than our cohort. As a result more tachycardia and symptomatic patients in our study eventuated poor in-hospital prognosis. In addition, lower mean LVEF value and low usage of HF medications in our patients might be other reasons for high in-hospital mortality.

Our study has some limitations. The research was conducted at a tertiary referral high volume hospital where excessive rate of severe and complicated patients referred which may limit the generalization of its conclusions. Our study was not a prospective randomized study, unmeasured variables if might have been available could effect the findings. Additionally, we report only in-hospital mortality and our results did not approve for post discharge conclusions. Furthermore, our registry data identify relationships between patient versatility and in-hospital mortality and did not describe cause and effect correlations.

The current study’s findings suggests that determining IVCCI < 23% during the frirst 12 hours of admission is an independent risk factor for in-hospital mortality of severe ADHF. The IVC measurements are easy to perform and ensures similar prognostic data as plasma concentrations of NT- proBNP. By contrast, measurement of LVEF did not contribute to prognostic information. Further studies needed to evaluate IVC characteristics with signs of severe ADHF in order to stratify the other risk factors for these patients.