Patients and Methods: Sixty six patients who had sternal wound infection after coronary bypass surgery in our hospital between January 2016 and December 2019 were included in the study. After surgical debridement and removal of foreign materials, vacuum-assisted closure therapy was initiated at a mean postoperative 26.56 ± 5.5 days. After wound healing and negative cultures, treatment was terminated and sternal wounds were closed with appropriate procedures.

Results: Fifty six patients (84.84%) had deep sternal infection and 10 patients (15.15%) had superficial sternal infection. Early mortality was 13.63% (nine patients), all having deep sternal infections. The most common microorganisms cultured were Staphylococcus aureus and Pseudomonas aeruginosa. Mean duration of hos- pitalization was 39.68 ± 2.48 days. No complications related with vacuum-assisted closure were detected. Recurrent sternal wound infection was not observed in any of the surviving patients.

Conclusion: Our results confirm that vacuum-assisted closure of wounds is a safe and effective treatment option for patients who are not candidates for primary closure or early muscle flap closure.

Sternal wound infection (SWI) is a rare but life-threatening clinical condition after cardiac surgery. Incidence of sternal wound infection has decreased steadily in years but it is still related with increased morbidity, mortality, decreased survival and increased hospital costs(1-3). There are several surgical treatment modalities for sternal infections including drainage of infective material, surgical debridement, primary sternal fixation with plates, sternal closure with muscle flaps. Vacuum-assisted closure (VAC) wound therapy was first reported as a new treatment option in 1997(4). There is not still a consensus on the best treatment option for sternal infections. In 2016, recommendation guidelines for prevention and treatment of sternal wound infections was published by the American Association for Thoracic Surgery (AATS) to decrease SWI related morbidity and mortality after cardiac surgery and VAC therapy was recommended to enhance the treatment(5). The aim of this study was to evaluate early outcomes of VAC therapy for SWI after coronary bypass surgery in our clinic.

Patients who underwent Coronary Bypass Grafting Surgery (CABG) in our hospital, between January 2016 and December 2019 were retrospectively reviewed. Among 4310 patients, 66 patients (1.53%) who had postoperative SWI and treated with vacuum-assisted closure (VAC) therapy were included in this study. Patients who had emergent surgical interventions and patients revascularized without use of mammarian arteries were excluded.

Patient data were collected from clinical records of the institution and laboratory results including blood and sternal wound cultures were retrieved from the electronic database of the hospital retrospectively, after approval of the study by the ethical committee of the hospital.

Definition of surgical site infection was made based on the criteria of Centers for Disease Control and Prevention(6,7). Wound infection was defined as superficial if only subcutaneous and cutaneous layers were involved and defined as deep if the infection had reached sternal surface and/or involved the sternum. The patients with SWI were diagnosed as mediastinitis with isolation of the microorganism in sternal wound aspiration cultures or fluids and presence of symptoms as fever, angina and sternal instability besides the radiological findings of the CT scan.

All patients decided to be treated with VAC therapy were taken to operating room (Figure 1). Patients were covered with disposable drapes after being cleaned with chlorhexidine. General or local anesthesia was preferred depending on patient’s clinical condition and the depth of surgical debridement. Surgical debridement was carried out under sterile conditions, all foreign materials, including the steel wires in patients with deep sternal infections were removed (Figure 2). Then VAC treatment was started using V.A.C® GranufoamTM, VeraT.R.A.C.TM Pad, V.A.C.UltaTM (KCI USA, San Antanio, Inc., TX) System. The size of the foam was tailored depending on the size of the wound. Applied negative pressure was set to 25-75 mmHg depending on the depth of the wound and exposure of the heart to prevent iatrogenic injury. A dressing barrier was used between the heart and sponge if necessary. VAC was usually replaced every 48-72 hours depending on the amount of drainage and the planned surgical debridement. With each replacement wound cultures were sent to the laboratory. The wound closed by using the most appropriate closure method (Figure 3). 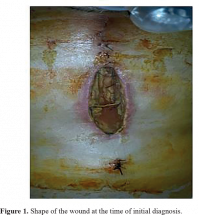 Figure 1. Shape of the wound at the time of initial diagnosis
× 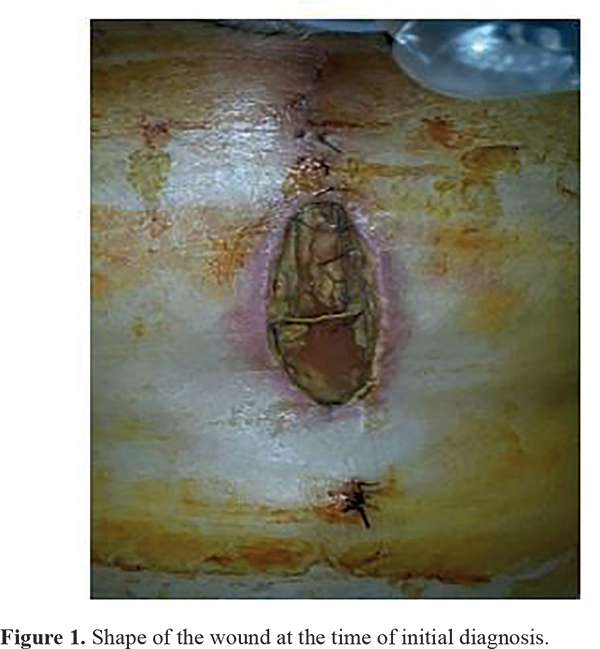 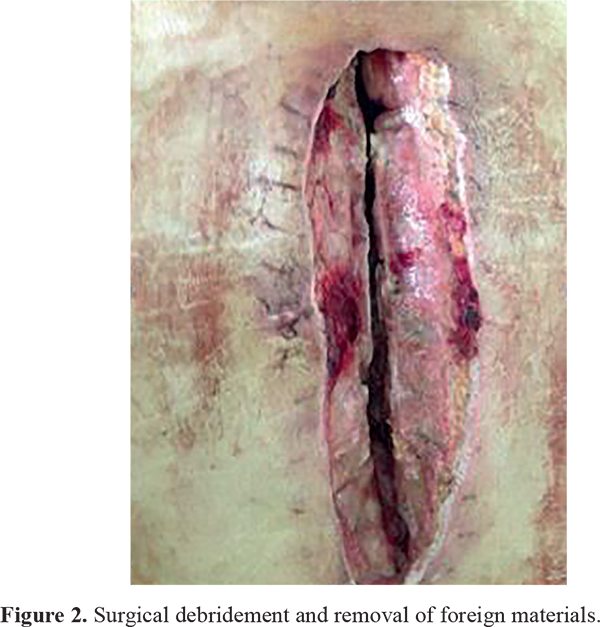 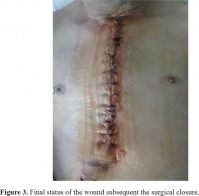 Figure 3. Final status of the wound subsequent the surgical closure
× 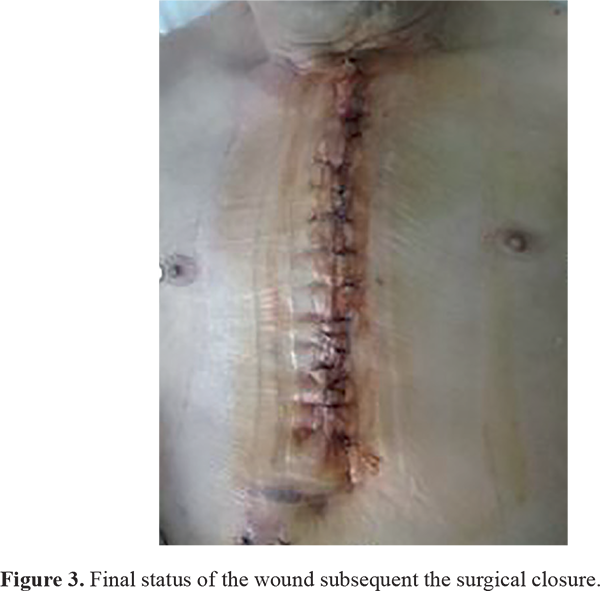 Antibiotic administration was planned by the infection committee of the hospital. Treatment with antibiotics was started with the first positive culture and then modified depending on subsequent culture results.

Statistical analysis were performed using statistical software (SPSS, version 23.0 for Windows; SPSS, Chicago, Illinois, United States). Numerical variables were given as mean and standard deviation (SD). Continuous random variables were presented as median and range (max-min values). Kolmogorov- Smirnov test was used in the distribution analysis of the data. Homogeneously distributed data were evaluated by the Student t-test, heterogeneous data were evaluated by the Mann- Whitney U test separately. To determine independent predictors for dependent variables; subsequently to univariate analysis test results the logistic regression analysis was applied to determine the ultimate risk factors and odds ratios of the factors foreseeing the mortality after VAC application subsequent to patients undergoing CABG surgery in our clinic.

Any difference with p value < 0.05 was regarded statistically significant. 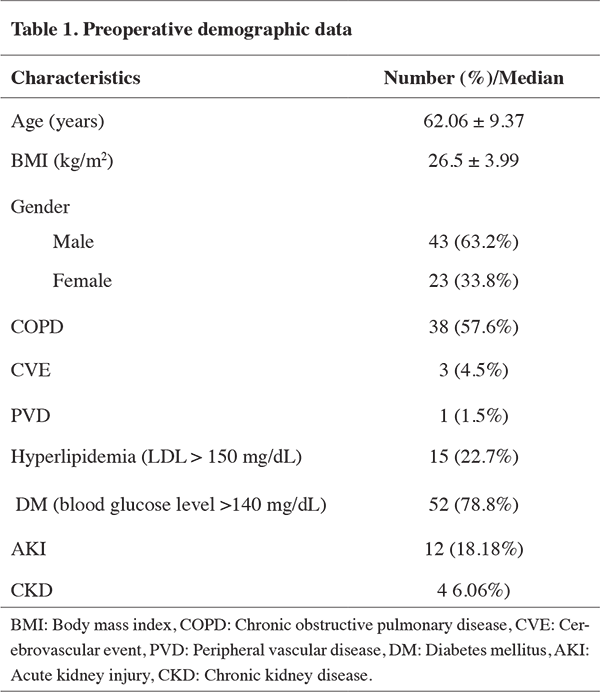 Prolonged intubation (more than 12 hours) was observed in 11 patients (16.66%). Postoperative mean albumin levels were 27.42 ± 5.35 g/dL and the blood albumin levels were found to be statistically significant for predicting prolonged hospital stay and mortality (p< 0.05). The mean hospital stay was 39.68 ± 2.48 days. Patients postoperative data were given in Table 2. 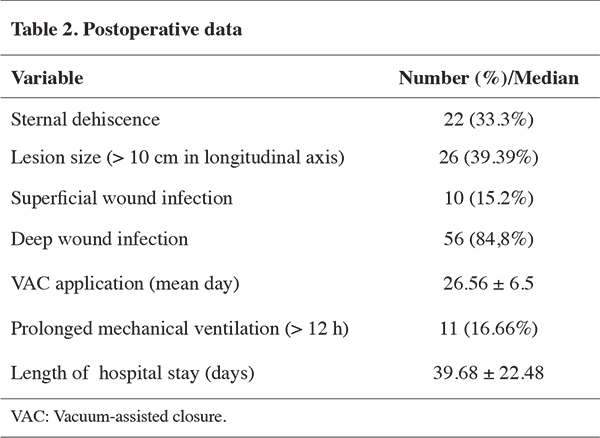 Most common microorganisms cultured were Staphylococcus aureus, Pseudomonas aeruginosa, Klebsiella aerogenes were Escherichia coli. The microorganisms were detailed in Table 3. 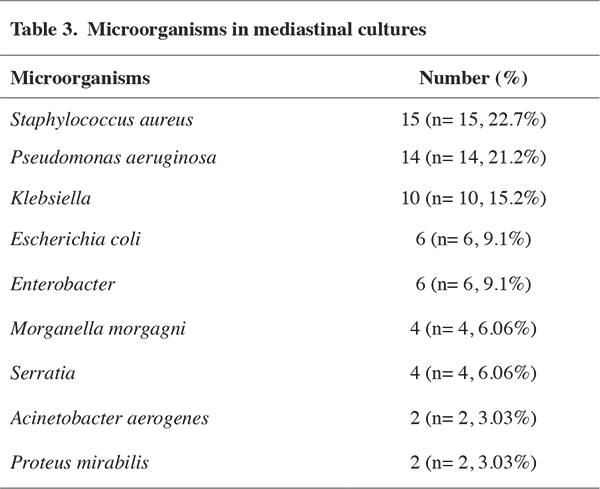 Early mortality was seen nine patients (13.63%) all having deep sternal infections. Subsequently the separate analysis the logistic regression analysis was applied to find out independent risk factors of in hospital mortality. Postoperative hypoalbuminemia, prolonged mechanical ventilation, existence of preoperative respiratory insufficiency, acute and chronic renal dysfunction were found as significant risk factors for mortality (p< 0.05). Pseudomonas, Klebsiella and Morganella microorganisms were found to be significantly related with mortality in this study (Table 4).

Deep sternal wound infections (DSWI) is a serious complication of cardiac surgery, increasing morbidity and mortality. It results in prolonged hospitalization, re-operations and increased costs(3,8). In case of deep sternal infection, first step treatment principles are almost standard, including surgical debridement of all necrotic and infected tissues, removing foreign materials, drainage of purulent material under suitable antibiotic treatment. Techniques for closure of sternum vary; it can be closed immediately or delayed.

There are several therapeutic options for treatment of DSWI, including surgical revision with open or closed irrigation, surgical debridement followed by delayed closure with Robicsek technique, sternal plating, nitinol clips and muscle flap closure and VAC therapy but there is not still an exact consensus on the optimal approach for DSWI(9-11).

Fuchs et al., reported that the VAC system helped to have negative wound cultures in a shorter time that resulted in reduced hospitalization period(19). Similarly Raja and colleagues reported that VAC treatment reduces the time period between surgical debridement and sternal closure(20). Negative pressure wound therapy is proposed in AATS guidelines as a class IIa recommendation in patients with deep sternal wound infections as a bridge for delayed sternal closure(5). A recent study by Martino and colleagues, showed that VAC therapy had significantly improved outcomes of both deep and superficial wound infections with complete healing and without recurrence(21).

In this series, we reported our early experience with patients who had delayed closure and had VAC therapy before closure. Our patients had persistent infection even after debridement and we needed to drain mediastinal spaces due to purulent effluent with the VAC system. Our results confirmed effectiveness of VAC, with acceptable mortality rate and absence of recurrence in all cases.

Early mortality was found to be 13.6% in our series which is similar with the previous studies(22). Risk factors for mortality were found to be respiratory insuffiency, prolonged ventilation, acute and chronic renal insufficiency and postoperative hypoalbuminemia in our study. Risk factors for deep sternal infections have been reported as obesity, advanced age, chronic obstructive lung disease, diabetes mellitus and use of mammarian arteries as conduits after CABG operations(15,23). Patients in our series were high risk patients by means of these risk factors for infection, therefore the mortality observed was probably related with the preoperative comorbidities.

Duration of the VAC treatment seemed to affect the length of hospitalization (mean 39.6 days) but in fact these patients were our first group of patients and the decision making process for utilization of VAC system was prolonged. That is the probable reason for prolonged hospitalization. Depending on our early experience, we believe that early use of VAC with the onset of infection signs and symptoms, will contribute us for better results.

Major limitation of the study is its retrospective design and relatively small number of patients. We did not have a control group treated with conventional methods to compare the effect of VAC treatment on morbidity and mortality in patients with mediastinitis, which we need to evaluate in a further study.

Despite adherence to all precautions to prevent sternal infections, postoperative superficial and deep infections may occur. Treatment options should be individualized, depending on patients clinical condition, risk factors, depth of the infection and microorganisms cultured. VAC of wounds is a safe and reliable treatment option for patients who are not candidates for primary closure or early muscle flap closure.

Due to the design of the study, consent to volunteer could not be obtained from the patients.

Figure 1. Shape of the wound at the time of initial diagnosis
×

Figure 3. Final status of the wound subsequent the surgical closure
×