Introduction: Interatrial block (IAB), which is defined as a conduction delay between the right and left atri- um, is characterized by the prolongation of P wave on the electrocardiography (ECG). In this study, we aimed to investigate the relationship between the presence of IAB and acute pulmonary embolism (APE) in patients admitted to emergency department with a preliminary diagnosis of APE.

Patients and Methods: In this retrospective case-control study, a total of 82 patients with a preliminary diag- nosis of APE were enrolled. Of these patients, 42 patients were diagnosed with APE via pulmonary computed tomographic angiography. In all patients, the ECGs were recorded on admission.

Results: Our study findings revealed that P wave dispersion, P wave duration of ≥ 120 ms, and notched P wave were significantly higher in patients with APE (p< 0.05 for all). Also, elevated heart rate and lower systolic blood pressure were found in patients with APE (p= 0.022 and p= 0.043, respectively). In multivariable logis- tic regression analysis, P wave duration of ≥ 120 ms was found to be an independent predictor of APE (OR: 3.958; 95% CI: 1.095-14.308; p= 0.036). In a receiver operating characteristics curve analysis, IAB predicted the APE with a sensitivity of 40.5% and a specificity of 85%.

Conclusion: Prolonged P wave duration was observed more frequently in patients with APE. The study find- ings showed that IAB may be an important predictor of APE in patients with a preliminary diagnosis of APE.

Acute pulmonary embolism (APE) is one of the life-threatening disease that may cause considerable morbidity and mortality. In addition, APE is a challenging emergency condition because the clinical presentation in patients with APE may range from mild chest pain to (1-3) shock . Even though the definitive diagnosis of APE is based on computerized tomographic pulmonary angiography (CTPA), some electrocardiographic (ECG) findings such as S1Q3T3 pattern, negative T-wave in precordial leads and atrial arrhythmias have been shown to have high specificity for APE(4-6).

Interatrial block (IAB), which is a conduction delay between right and left atrium, was defined as a positive P wave duration longer than 120 ms on the surface ECG, or manifested as P wave duration longer than 120 ms plus biphasic (±) morphology in leads II, III, and aVF(7). Some previous studies concluded that IAB was related with the occurance of atrial fibrillation in acute coronary syndrome patients(8). However, it has been unknown whether IAB is a marker of APE in patients presented with signs and symptoms of APE. Therefore, in our study, we aimed to evaluate the potential diagnostic utility of IAB in patients with a preliminary diagnosis of APE.

In this retrospective case-control study, the patients who presented to emergency department with signs and symptoms of APE from January 2016 to June 2018 and underwent CTPA were reviewed. The patients who had end-stage liver and renal disease, active infection, acute coronary syndrome, chronic inflammatory disease, and coagulopathy were not included in this study. In addition, the patients whose ECG morphology indicating atrial fibrillation or pace rhythm were also excluded from the study. After evaluation regarding with exclusion criteria, 82 patients were enrolled in our study. Of these patients, APE diagnosis was confirmed in 42 patients by CTPA. Control group consisted by remaining 40 patients with a final diagnosis other than APE. Among these patients, 10 patients had been treated as acute heart failure, four patients as pneumonia, and 16 patients as acute asthma or exacerbation of chronic obstructive pulmonary disease. In the remaining 10 patients, there was no detected organic pathology. All patients who had a diagnosis of APE were treated with the standard medical therapy in accordance with the recent guidelines. Our study protocol was confirmed by the local ethics committee of our hospital in accordance with the principle of the Declaration of Helsinki. Due to the retrospective design of the study, an informed consent was not needed.

The standard 12-lead ECGs were achieved on a paper with speed of 25 mm/s, amplitude of 10 mm/mv, and a filter range between 0.5 to 150 Hz from whole patients on admission. The beginning of the P wave was defined as the initially detected upward or downward deflection calculated from baseline. The returning point of the P wave to the baseline was defined as the P wave offset. IAB was defined as the duration of P wave longer than 120 ms with or without presence of notching. The P wave maximum was calculated in each leads, and the algebraic difference between the two was accepted as the P wave dispersion. The ECGs were analyzed by two independent cardiologists who were blind to the patients’ clinical data.

All echocardiographic examinations were obtained by an experienced cardiologist using an ultrasound machine (Vivid 7, GE Healthcare, USA) within 24 hours during hospitalization. The peak systolic pressure of pulmonary artery was calculated using the simplified Bernoulli equation. The left ventricular ejection fraction (LVEF) was calculated in accordance with the Simpson method.

In the present study, APE was diagnosed by CTPA with a standard APE protocol (which was a contrast material volume: 135 mL, contrast material injection rate: 4 mL/sec, field of view: 35 cm and section thickness: 3 mm). Two radiology specialists confirmed the diagnosis of APE if there was thrombus at the main pulmonary artery or its major branches.

Categorical variables were stated as percentage (%), whereas continuous variables were stated as mean ± standard deviation or median. Kolmogorov-Smirnov test was used to test the normality distribution of continuous variables. Chi-square or Fisher exact test were used for comparison of categorical data. Correlation of continuous variables was analyzed by Pearson correlation test. Correlation of non-continuous variables was analyzed by Spearman test. Student t-test or Mann-Whitney U test was used to compare continuous variables between the two groups. In order to find the independent predictors of APE, a multivariate logistic regression analysis was performed. A 2-sided p value of < 0.05 was accepted as significant. The IAB value which predicted the best sensitivity and specificity of APE was calculated with receiver operating characteristic (ROC) curve analysis. The effect size (Cohen’s d) and power value (1–β) for IAB, which was compared between patients with and without APE, were measured via G*Power software. The power value and effect size were 0.92 and 0.77, respectively. Statistical analysis were performed with SPSS version 21 (IBM Corp., Armonk, NY).

A total of 82 patients [43 females (52.4%), mean age 56 ± 18 years] were included in our study. The baseline clinical and laboratory characteristics of all patients are shown in Table 1. The level of heart rate, respiratory rate, systolic blood pressure, oxygen saturation, sodium level, and positive troponin level were significantly different between the patients with and without APE (p< 0.05, for all). Comparing the echocardiographic findings showed that patients with APE had significantly higher prevalence of more than mild degree of tricuspid regurgitation, increased systolic pulmonary artery pressure, right ventricle dilatation, and increased right ventricle/left ventricle ratio (p< 0.05, for all) (Table 2). In terms of electrocardiographic parameters, the frequency of; increased P wave duration, P wave dispersion, P wave duration of > 120 ms, and P wave notching were significantly higher in patients with APE compared to controls (p< 0.05, for all). However; there was no significant difference in terms of negative T wave on the precordial leads, P wave maximum duration, and presence of fragmented QRS (p> 0.05, for all).

Table 1. Baseline demographic characteristic and laboratory findings of all patients and patients with or without PTE
× 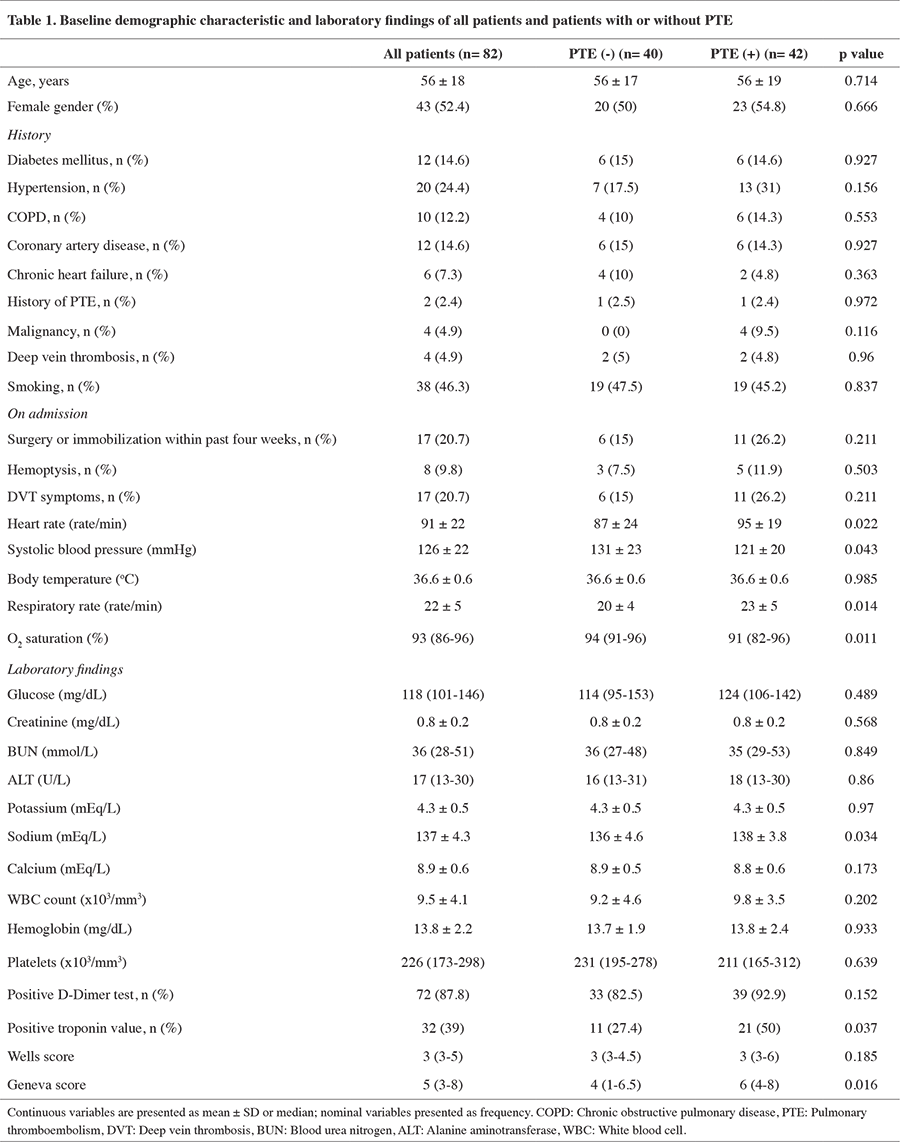 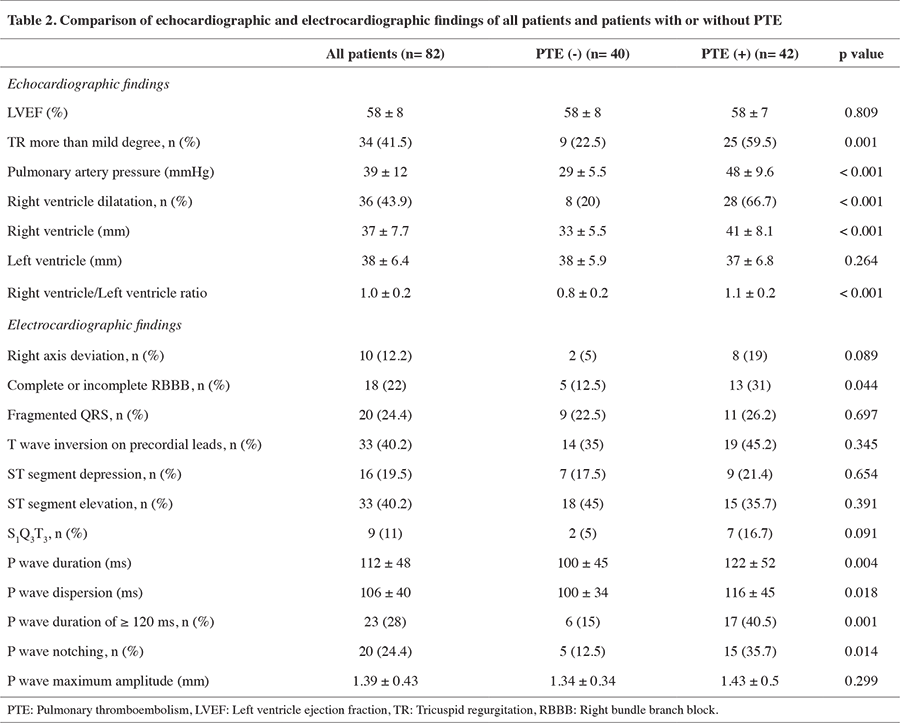 After the exclusion of patients who had chronic obstructive lung disease and chronic heart failure, electrocardiographic findings of patients with and without APE were compared and showed in Table 3. Heart rate, complete or incomplete right bundle brunch block, P wave duration, P wave dispersion, P wave duration of ≥ 120 ms, and P wave notching were remained different significantly between patients with and without APE (p< 0.05, for all). 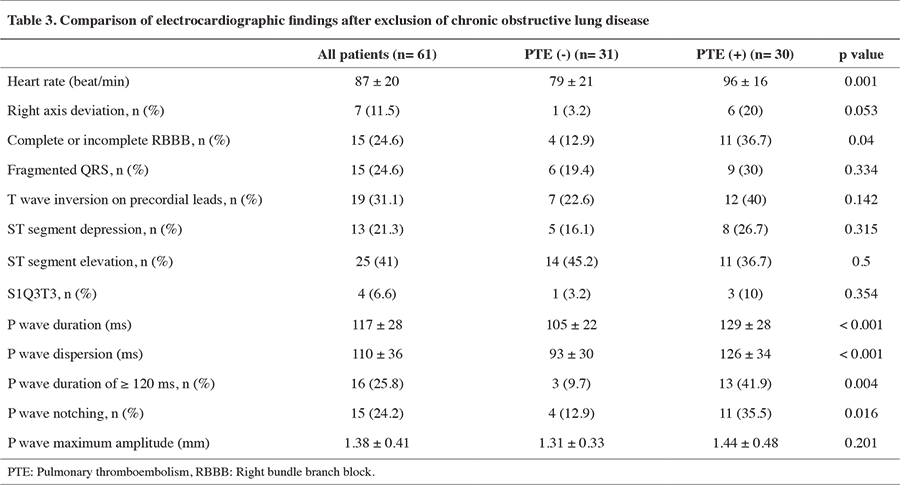 Our study findings showed that the presence of IAB, namely P wave duration longer than 120 ms on the ECG, were significantly associated with APE, and it was found to be an independent predictor of APE. To the best of our knowledge, this was the first study demonstrating the potential effect of IAB for the presence of APE in patients with a preliminary diagnosis of APE.

The patients with APE may present with different clinical presentations, which may range from chest pain to cardiogenic shock(1,2). Thus, it is a challenging disease based on the clinical presentations. Therefore, CTPA is performed in order to confirm or exclude the presence of APE. Similarly, the diagnosis of APE in our study was confirmed by CTPA in all patients.

As possible explanations of the study findings, we thought that these ECG changes in APE are probably due to occlusion of the pulmonary artery by a massive embolus, which cause a rapid pressure overload to the right ventricle and the right atrium(11,12). This rapid increase of pressure overload may lead to the dilatation and dysfunction of the right ventricle, thus resulting in decreased of blood flow through the right ventricle outflow tract, thereby reducing the left ventricle preload. Moreover, in an experimental study, Gold et al. demonstrated that acute pulmonary hypertension may cause right ventricle subendocardial ischemia, which may explain the disruption of the right-sided cardiac conduction and repolarization(13). Furthermore, we hypothesized that decreased blood flow to the lung due to embolus may enhance the release of vasoconstrictive mediators such as histamine and catecholamines(10). As a result, this release of vasoconstrictive mediators may cause ischemia of the right ventricle and right atrium as well as hypoxia of the Bachmann’s bundle which is the equivalent of His-Purkinje system between the atria. Thus, the ischemic media can eventually result in deceleration of the conduction pathway of the right side of the heart, which may manifest itself as the prolongation of P wave on the ECG. In addition, P wave prolongation may reflect inhomogeneous atrial depolarization in response to various electrical and structural remodeling(8,14).

IAB, which is a newly introduced ECG parameter, is interpreted as the conduction time prolongation between the left and right atrium due to an impulse delay or blockage that is most often but not exclusively in the Bachmann’s bundle. Several previous studies stated out that IAB had an association with the development of new-onset atrial fibrillation in patients with coronary artery disease and peripheral vascular disease(8,15,16). Moreover, Senen et al. revealed that the left ventricular systolic dysfunction could lead to significant cardiac hemodynamic changes, which can alter the left atrium electrical properties resulting in a high prevalence of P wave dispersion and IAB in patients with dilated cardiomyopathy(17). However, it is unknown whether there is any association between IAB and APE. This might be the first study to demonstrate that the prevalence of IAB, was significantly elevated in patients with APE. Moreover, the frequency of P wave dispersion was more common in patients with APE.

Our study findings may be useful and valuable in terms of clinical applicability. As a simple and easily obtained ECG parameter, IAB may have an additive diagnostic value in patients who present to emergency department due to APE signs and symptoms. However, as it was a retrospective case-control study, our study findings deserve further prospective and large scaled studies to clarify the exact role of IAB in patients with APE.

Our study has some limitations. First of all, the sample size is relatively small. However, the power analysis of the study was found to be sufficient. Secondly, we were not able to observe whether there is any different in ECG findings during follow-up period. Finally, further studies with large sample size and longer follow-up time are required to increase the accuracy of the results.

In the present study, we demonstrated that IAB, namely P wave duration longer than 120 ms on the ECG, may be independently related with APE. As a simple, cheap, easy to obtain, and non-invasive ECG parameter, IAB may have an additive diagnostic value for predicting APE.

Table 1. Baseline demographic characteristic and laboratory findings of all patients and patients with or without PTE
×