Introduction: The right heart is more unknown than the left heart, because of less research. With it, its importance is understood, when right heart related diseases are considered. The relation between coronary vascularity and cardiac function is indisputable. There are no research about the effect of coronary dominance, that is anatomical variation merely, upon cardiac function. We investigated difference of right or left domination on right ventricle functions using echocardiography.

Patients and Methods: Working group was contained patients who is done coronary angiography with any indication. Patients were categorized right dominant and non-dominant on coronary angiography. At the same time, the origin of posterior descending artery was determined. There were 2 groups and each of them had 40 patients. Patients who had >50% stenosis on coronary arteries, myocardial infarct previously, cardiac valve disease, chronic obstructive lung disease and pulmoner embolism in past were excluded. Right ventricle functions were investigated using Echocardiography by the same operator. The results were evaluated and calculated average value by two different operators. We used Wilcoxon and Mann-Whitney U Test in evaluation of statistics.

Conclusion: The effect of right coronary artery dominance on right ventricle functions was not obtained significant.

The right ventricle (RV) is considered the neglected heart chamber due to inadequate research. It is speculated that the anatomy of the RV makes it less vulnerable to myocardial ischemia and protects it from being affected by myocardial and valvular diseases. Recent data suggested that several cardiac conditions have devastating effects on the function of the RV and this dysfunction has a severe prognostic impact. In practice, RV functions including abnormal filling and contraction may deteriorate in the absence of RV heart failure. Prior studies evaluating the RV were mainly focused on diseases that were known to affect RV functions including inferior myocardial infarction with RV involvement, chronic obstructive pulmonary disease (COPD), pulmonary hypertension (PH), and pulmonary hypertension secondary to chronic pulmonary thromboembolism (CTEPH).

There is solid evidence between impairment in coronary blood flow and myocardial functions. Ischemic cardiomyopathies are mainly caused by stenosis in coronary arteries leading to reversible or irreversible myocardial ischemia. In the present study, we aimed to compare the effect of right coronary artery (RCA) dominancy on RV functions in patients who do not have any diseases causing dysfunction in the RV such as coronary stenosis, COPD, PH, CTEPH, or valvular heart diseases.

Between December 2016 and May 2017, patients who underwent coronary angiography (CAG) and were found to have <50% stenosis in any coronary artery were divided into two groups according to the right coronary artery dominancy which was determined by the origin of the posterior descending artery (PDA)(1). It was considered right or non-right coronary arterydominant based on whether PDA originated from the RCA or not, respectively. Overall, 80 patients were included, and each group consisted of 40 patients.

The inclusion criteria were the following:

1) Undergoing CAG for the indications that were recommended in the latest guidelines,

4) Absence of >50% stenosis in any coronary artery, and

The exclusion criteria included the following:

3) Condition that may cause dysfunction in the RV including COPD, PH, and CTEPH,

Patients underwent detailed physical examination and were probed for their medical histories.

RV global and free wall strains were obtained through apical four-chamber view and simultaneous ECG recording. RV Strain measurements were calculated with the modification of the left ventricular strain software as there is none for RV in our institution. 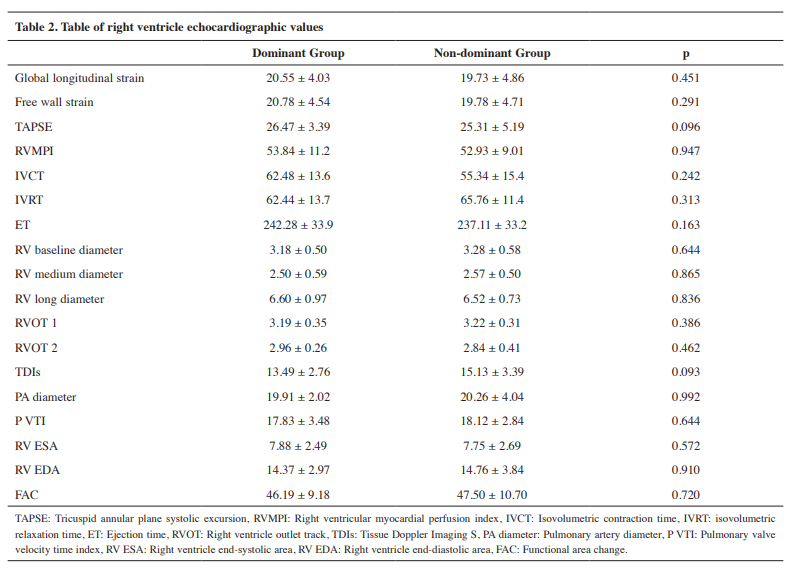 Previous studies mainly focused on the RV function in the context of diseases that involved RV such as RV myocardial infarction and PH. In the current manuscript, we evaluated only RCA dominancy on RV functions evaluated by echocardiography in the absence of any significant conditions affecting RV.

In a prior study, Blanchard DG, et al. included patients with CTEPH and compared the Tei index with those without CTEPH. They found higher Tei index those with CTEPH 0.27 ± 0.09 vs 0.52 ± 0.19, p= 0.0001)(3). When patients underwent pulmonary endarterectomy surgery, there was a significant reduction in Tei index (0.52 ± 0.19 vs 0.33 ± 0.10 (p< 0.0001). In previous studies, an increase in RVMPI was attributed to the conditions that caused an increase in the RV afterload and pulmonary vascular resistance(4,5). Accordingly, a prior study in which the Tei index was evaluated before and after the revascularization on days zero, seven and 30 revealed that RVMPI was correlated with ischemia severity and RV dysfunction(6). In this regard, no difference in RVMPI between the right-dominant and non-right-dominant groups was found in our study because we found no difference in pulmonary artery pressure, RV myocardial perfusion abnormality, and RV afterload.

We found no difference in terms of RV inlet and outlet diameters between groups. This finding is consistent with a prior study in which they included patients with myocardial infarction and RV involvement. In this study, Ramzy et al. compared RV planar diameters in patients with inferior myocardial infarction following thrombolytic therapy at discharge and day 30. They found that the RV inlet (4.0 ± 0.7 vs 3.7 ± 0.6 (p= 0.2) and outlet diameters (3.1 ± 0.3 vs 3.3 ± 0.6 (p= 0.2) were statistically similar between groups(6). Thus, right coronary artery dominancy was not expected to alter RV diameters as no difference was noted even in those with myocardial infarction.

Lemarie et al. investigated patients with anterior and inferior myocardial infarction and compared RV functions with cardiac magnetic resonance imaging (CMRI). Patients with RV EF <50% were considered to have RV involvement and these patients further underwent echocardiographic examination(7,8). They found that FAD (35.7 ± 11.0 vs 45.3 ± 8.7, p< 0.0001) and RV global strain determined by speckle tracking (17.1 ± 5.2 vs 21.0 ± 3.4, p< 0.0001). Segmental strain analysis revealed that all segments other than the septal segment were significantly correlated. There was no difference other than strain and FAD measurement which was consistent with our findings. This can be attributed to the absence of coronary lesions that can cause ventricular performance.

In CTEPH patients, a previous study investigated the correlation between right heart catheterization with TAPSE and RV longitudinal strain parameters. There was a significant correlation between TAPSE and RV longitudinal strain parameters. In addition, a trend toward a significant correlation was found between TAPSE with mean pulmonary artery pressure, pulmonary vascular resistance, right cardiac output, and cardiac index which did not reach statistical significance(9). In other studies of pulmonary arterial hypertension patients, deteriorated RV functions were observed despite normal TAPSE values(10). On the other hand, RV performance might be preserved even in patients with reduced TAPSE, as seen in patients undergoing cardiac surgery(11,12). In our study, we expected similar TAPSE as there was no underlying condition affecting RV cardiac index and output alteration.

Apart from those studies, He, et al. followed 6255 patients who had acute coronary syndrome and underwent CAG for two years. Importantly, patients with left dominant coronary vasculature had a higher risk of mortality and intraaortic balloon pump requirement (2.58% vs 1.23%, p= 0.024)(14). Left ventricular coronary flow occurs mainly in the diastolic phase of the cardiac cycle. On the other hand, coronary flow to the thinwalled RV occurs both in the diastole and systole. We speculate that in the absence of any condition causing increased RCA vascular resistance, no difference in RV functions would be expected solely caused by RCA diameter ad length. Different findings might be expected if patients with RV hypertrophy deteriorating biphasic RV coronary perfusion were included.

This study had several limitations. First, this is a singlecenter and retrospective study with a limited number of patients. Second, echocardiographic strain measurements were performed according to the modified left ventricle strain settings. Third, myocardial ischemia was determined anatomically not functionally. Echocardiographic and angiographic evaluations were made by a single clinician. Therefore, it was not possible to provide an interobserver agreement.

Coronary artery dominancy in the absence of any other condition did not affect RV functions determined by echocardiographic examination.