A Single-Center Retrospective Study of Patients with ALCAPA

Introduction: Anomalous left coronary artery from the pulmonary artery (ALCAPA) is a rare but fatal disease. Untreated cases have a first-year mortality rate of 90%. We aimed to evaluate the early outcomes of patients who were operated on for ALCAPA in our clinic.

Patients and Methods: We retrospectively reviewed the cases of seven patients who were operated on in our clinic for ALCAPA between 2013 and 2019. Preoperative, early postoperative, and first year echocardiography results were compared.

Results: Five patients (71.4%) underwent reimplantation and two patients (28.6%) underwent Takeuchi repair. The median age was 25 months and 71.4% (n= 5) of the patients were aged ≤1 year. In preoperative echocardiograms, mean ejection fraction (EF) was 32.1 ± 4.9% and mean preoperative MR grade was 2.1 ± 0.7. Two patients with severe MR (grade 3) underwent simultaneous mitral annuloplasty. The mean EF % significantly increased (p= 0.023) and the mean MR grade significantly decreased (p= 0.039, p< 0.05) in the early postoperative period. This finding was not statistically associated with surgical technique or age. The mortality rate was 14.3% (n= 1). The patient who died had severe preoperative LV dysfunction and MR, which did not improve after surgical intervention.

Conclusion: Early improvement in LV function and MR grade after ALCAPA repair is crucial for survival regardless of age. Moderate or mild functional MR may spontaneously improve after the surgical correction of LV dysfunction. Simultaneous mitral valve intervention is needed in cases of severe MR and patients aged ≥1 year.

Anomalous origin of the left coronary artery from the pulmonary artery or ALCAPA, was first described by Bland, White and Garland in 1933 and is accordingly also known as Bland-White-Garland syndrome(1). It is a rare congenital heart disease and affects one in 300.000 live births(2). The anomalous left main coronary artery typically originates from the left or posterior sinus of the pulmonary artery and proceeds to branch normally(3,4). In the setting of inadequate coronary collaterali- zation after birth, severe left ventricular (LV) myocardial is- chemia and dysfunction will occur. Secondary mitral regurgi- tation (MR) of varying degree is present in most cases(5). Its treatment requires surgery and various techniques have been developed over time. In this study, we share the early outcomes of patients who underwent ALCAPA repair in our clinic.

We retrospectively reviewed the cases of patients who underwent ALCAPA repair in our clinic between 2014 and 2019. The study was granted approval by the institutional ethics committee (Date 12.01.2021, Number 2021/1/423). The patients were compared in terms of demographic characteristics, surgical methods, and echocardiography findings. LV function was assessed with M-mode echocardiography pre- and postoperatively and one year after the intervention. LV dysfunction was defined as an ejection fraction (EF) below 50%. The change between pre- and early postoperative EF % was defined as ∆EF1 (preoperative-early postoperative) and the change between early and one-year outcomes was defined as ∆EF2 (preoperativeearly postoperative first year). Mitral valve insufficiency (MR) was evaluated according to conventional guidelines as grade 0 (no MR), grade 1 (mild MR), grade 2 (moderate MR), grade 3 (severe MR), or grade 4 (most severe MR)(6).

Data were analyzed using SPSS 26.0 (IBM Corp., Armonk, NY, USA). For univariate analysis, the Shapiro-Wilk Francia test was used to assess the normality of distribution. The Wilcoxon signed rank test was used to compare repeated measurements of dependent quantitative variables. The Friedman two-way test was used with Monte Carlo simulation in the comparison of repeated measurements of multiple dependent variables. Stepwise step-down comparisons were performed for multiple comparisons. In the tables, quantitative variables are presented as mean (standard deviation) or median (minimum/maximum), and categorical variables are presented as n (%). The variables were analyzed at the 95% confidence level and a p-value of less than 0.05 was considered significant. 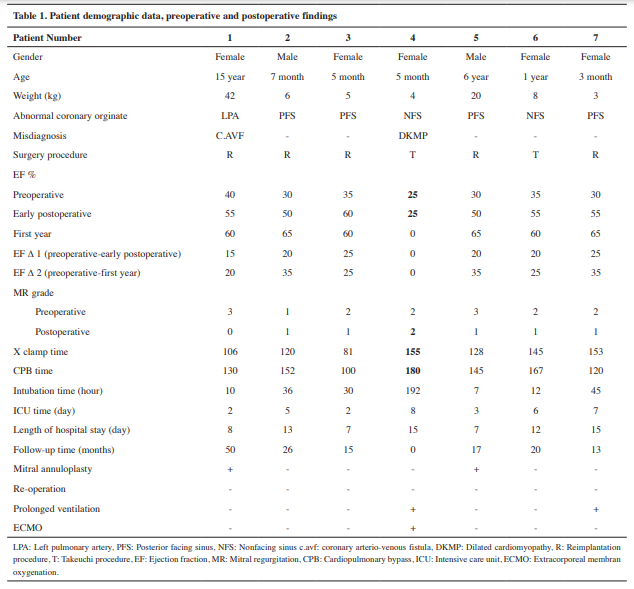 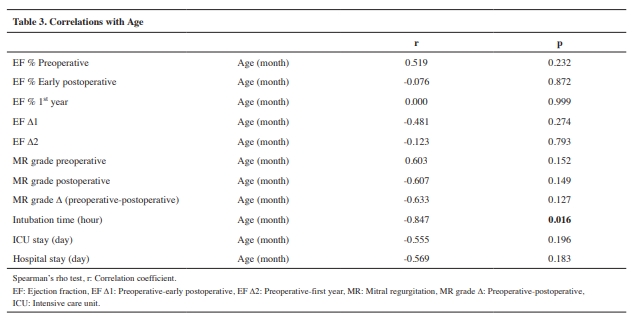 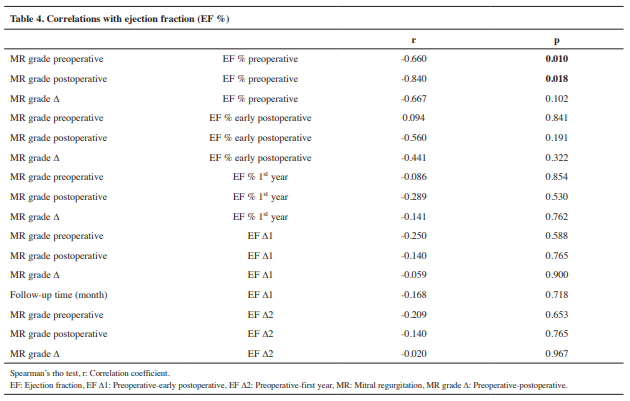 The mortality rate was 14.3% (n= 1). The patient who died was five months old and had undergone Takeuchi repair. This patient had a preoperative EF of 25%, i.e. severe LV dysfunction. EF and MR grade did not improve in the early postoperative period and the patient required extracorporeal membrane oxygenation (ECMO).

Surgical correction is the gold standard of treatment for ALCAPA repair and several techniques have been described in the literature(6,7). There is no consensus on the best surgical technique for treating ALCAPA(8). In our clinic, reimplantation is the preferred method for the treatment of ALCAPA, decided perioperatively based on the origin of the anomalous coronary artery. If ALCAPA arises from the posterior facing sinus of the pulmonary artery, the classical reimplantation procedure is performed. ALCAPA is transected at its origin from the pulmonary artery. After it is mobilized from the surrounding tissue, it is anastomosed, taking care not to disrupt the coronary flow to the aorta (Figure 1). In our study, five patients (71.4%) underwent reimplantation, four of whom had a left coronary artery arising from the posterior side of the pulmonary artery and one from the left pulmonary artery. In our clinic, if ALCAPA originates from a non-facing sinus, the Takeuchi procedure is preferred. In the Takeuchi procedure, after creating an aortopulmonary window, we do not use pulmonary flaps during tunneling, unlike the classical procedure. Instead, the tunnel is created by anastomosing the posterior face with the pulmonary artery and the anterior face with an autologous pericardial patch. Again, the main pulmonary artery is reconstructed with an autologous pericardial graft in every patient to alleviate the risk of postoperative PS (Figure 2). In our study, Takeuchi repair was performed for 28.6% of patients. Neither of those patients developed surgical complications or required reoperation, but one patient who underwent Takeuchi repair died.

Standard echocardiographic data have confirmed that systodiastolic LV function recovers after successful surgery in most patients, but residual myocardial fibroelastosis is relatively common, although well tolerated(9). Although the causes of functional recovery are only partially understood, some authors have associated it with hibernating myocardium(10,11). Another theory is that healthy myocytes reduce scar tissue and proliferation(10,12). Latus et al. argued that despite the improved LV function after successful reimplantation, scar tissue is visible on MRI and the possibility of permanent or recurrent myocardial damage and subclinical ischemia still persists(13,14). Similarly, Secinaro et al. and Fratz et al. reported myocardial scarring in 71% of patients after repair despite normal LV function but did not associate this finding with LV size or function(10,15).

Kudumula et al. reported normal LV function in 88% of infants and children with ALCAPA in late follow-up(16). Other studies demonstrated significant improvement in LV function. In 2017, Zhang et al. demonstrated satisfactory improvement in heart function even in patients with severe ventricular dysfunction and myocardial infarction(17). In 2020, the another study suggested that LV function temporarily decreased in the early postoperative period and returned to normal after 14 days(18).

The restoration of correct anatomy allows the rapid recovery of LV function at one year after surgery(11,19,20). In a study conducted in our country, it was suggested that early diagnosis positively affects the success of treatment and that coronary artery origins should be evaluated in terms of ALCAPA, especially in patients with dilated cardiomyopathy(21).

The literature, however, contains insufficient data on the effect of patient age on the improvement of LV function after ALCAPA repair(22). Some studies have suggested that early surgery accelerates the recovery of ventricular dysfunction, which was confirmed by Stern et al., who demonstrated perfusion defects with thallium-201 imaging(23).

In our study, EF % values significantly increased in the early postoperative period, in accordance with the literature (p= 0.023). ∆EF1 was 17.9 ± 8.6 and ∆EF2 was 25.0 ± 12.6, and LV dysfunction improved in the early postoperative period (i.e. the first two weeks after surgery) and then plateaued, with minimal improvement thereafter. There was no correlation between age and the change in EF.

One major factor that influences the outcome of ALCAPA repair is MR severity(24). The etiology involves the ischemic dysfunction of papillary muscles and LV enlargement resulting in mitral annular enlargement(9,17,24). The timing of mitral valve repair during ALCAPA remains controversial. Indeed, especially in infants, MR may gradually decrease or remain stable in patients with mild to moderate preoperative MR without requiring mitral valve repair or replacement(25). Several studies have reported that simultaneous mitral valve repair had no effect on the normalization of LV function or other surgical outcomes(20,25).

Some researchers have suggested that simultaneous mitral annuloplasty should be performed for all patients undergoing ALCAPA repair, regardless of MR grade(26,27), as it may improve early postoperative cardiac output and reduce operative mortality(28). Neumann et al. recommended simultaneous surgery for patients who preoperatively have moderate or severe MR, especially if left ventricular ejection fraction (LVEF) is normal upon admission. In addition, postoperatively, MR improves much more rapidly in younger patients, as is the case with LVEF(29).

Since annuloplasty does not accommodate growth, it cannot be applied to infants and young children and needs to be substituted by the surgical repair of the chordae and papillary muscles. Due to being time-consuming and technically demanding, mitral valve repair during initial surgery can increase ischemic time, which can be detrimental to an already compromised myocardium.

In our study, age was not associated with pre- or postoperative findings. Two patients (28.6%) with grade 3 MR, aged six and 15 years, respectively, underwent simultaneous mitral annuloplasty. Patients younger than one year of age and patients with moderate or mild MR did not undergo mitral valve intervention, and with improvement in LV dysfunction, MR grades decreased significantly in the postoperative period (p= 0.039). In our clinic, we perform mitral valve intervention for patients aged over one year, patients with severe MR, and patients with organic MR pathologies on preoperative echocardiography scans.

The literature reports operative mortality rates between 0% and 23%(3,24). Preoperative LV dysfunction and/or more severe preoperative MR are risk factors for increased postoperative mortality(30). A younger age was associated with mortality in some centers(30). Lange et al. suggested that these risk factors were significant for mortality, while Gao et al. indicated that they were not(22,31). Similarly, Schwartz et al. reported that preoperative MR did not predict mortality whereas Caspi et al. reported that a younger age was not a risk factor for mortality but was associated with an increased need for positive inotropic and/or ECMO support. It is also associated with reduced hibernating myocardium and collateralization(31,32).

In our study, the mortality rate was 14.3% (n= 1). This patient had the lowest preoperative EF % in the patient series and also had grade 2 mitral regurgitation. LV dysfunction did not improve in the early postoperative period and the patient required ECMO. Echocardiography prior to the Takeuchi procedure revealed no problems with tunneling or coronary blood flow. All patients were operated on under moderate hypothermia and the same cardiological principles; therefore, mortality was not associated with myocardial protection.

Surgery should be performed early for patients diag- nosed with ALCAPA, regardless of symptoms and age. Due to achieving a dual coronary system, reimplantation should be the treatment of choice. If it is not suitable, the Takeuchi pro- cedure can be performed. Severe preoperative LV dysfunction and postoperative persistent LV dysfunction may predict mor- tality, although this finding is limited by our small sample size. Improved LV function may be sufficient to correct functional MR. Simultaneous mitral valve intervention may be beneficial in patients with severe MR.

The study protocol was approved by the Kartal Koşuyolu High Specialization Training and Research Hospital Eth- ics Committee. The study was conducted in accordance with the principles of the Declaration of Helsinki (Decision no: 2021/1/423 Date: 12.01.2021).