When Should the Sternum Be Closed After Aortic Surgery?

Patients and Methods: Among 2151 patients who underwent ascending aorta and/or aortic valve surgery between January 2012 and December 2020, 64 patients managed with DSC were included in the study. The records of the patients were obtained from the hospital archive/hospital electronic database. Postoperative day 30 was determined as early mortality.

Results: Uncontrollable bleeding 34.4% (n= 22), LCOS (Low Cardiac Output Syndrome) 31.4% (n= 20) and mediastinal edema 28.1% (n= 18)were the main causes for DSC. In the remaining patients (6.3%, n= 4), DSC was preferred for other non-specific reasons such as uncontrollable arrhythmia. Forty-five patients’ chests (70.3%) were closed in the postoperative period, and 19 patients (29.7%) could not be closed due to death (p< 0.001). Early mortality was observed in 27 patients (42.2%), and sepsis was observed in 10 patients (15.6%). Deep sternal wound infection (DSWI) was present in 4.7% of the patients and the rate of sepsis was higher in this patient group (66.7%-13.1%, p< 0.05). There was no statistically significant difference in the probability of sepsis in the culture-positive patient group (p> 0.05). However, the closure time was longer in patients with a previous operation history, postoperative acute renal failure, surgical site infection, and postoperative bleeding revision/surgical revision (p< 0.05).

Conclusion: DSC can be preferred as a life-saving method for various reasons such as bleeding diathesis, mediastinal edema, and malignant arrhythmia after open-heart surgery. Accurate timing and close follow-up are important for sternal closure. In these patients, a multidisciplinary approach is required in the postoperative period.

Closure of the surgical field in open-heart surgery is important in terms of reducing surgical site infection. However, this situation may progress differently in patients requiring long operative time, having comorbid factors, and operated under emergency conditions. Reperfusion can be closed in the late period by leaving the sternum open in patients with secondary myocardial edema, in patients with a high bleeding expectation, in arrhythmogenic cases, and critical patients with left ventricular assist devices. Delayed sternal closure (DSC) after post-cardiotomy is a life-saving approach that reduces early mortality in this patient group. The rate of performing the DSC procedure in adult open-heart surgery is between 1% and 4%(1).

The rate of bleeding in the surgical field is high in patients undergoing aortic surgery, especially in the patient group with high mortality due to aortic dissection in emergency conditions, and in patients undergoing redo surgery with a history of anticoagulant/antiaggregant use. DSC is a frequently used method in these patients(2,3).

Prolonging the operation time in unstable patients admitted under emergency conditions may disrupt the coagulation cascade due to prolonged CPB (cardiopulmonary bypass). The DSC procedure can be considered a transitional period for the control of hemodynamic and cardiac instability in the early postoperative period in this patient group(4,5). The timing of the sternal closure in this group may vary from patient to patient. For this reason, it is necessary to determine the factors in terms of planning this timing in the intraoperative and early postoperative period(6).

The aim of this study was to examine factors that may affect morbidity and mortality in patients managed with DSC after aortic surgery.

In our study, 64 patients among 2151 patients who underwent aortic and/or aortic valve surgery in our cardiac surgery clinic from January 2012 to December 2020 were retrospectively analyzed. The records of the patients were obtained from the hospital archive/hospital electronic database.

Depending on the profile of the case, arterial cannulation of the patients was aortic, femoral, or axillary, and venous cannulation was unicaval, bicaval, or femoral. It was decided to open the chest in patients who required central venoarterial extracorporeal membrane oxygenator (ECMO) support, had bleeding diathesis, were hemodynamically unstable, and had malignant arrhythmias while closing the sternum. When the decision to open the chest was made, the skin was sutured using 1/0 polydioxanone (PDS) suture material., with the sternum open and the skin fully approximated. In the postoperative intensive care follow-up of the patients, daily chest X-rays and echocardiographic evaluations were made.

This is a retrospective, observational, single-center case series study. Age, gender, weight, diagnosis, previous operations, applied procedure, hospital stay, and laboratory results of the patients were recorded. The period covering postoperative day 30 was taken as a basis in terms of early mortality. The study was approved by the ethics committee on 24/8/2021 (number 2021/10/514) and performed in accordance with the Declaration of Helsinki.

NCSS (Number Cruncher Statistical System) 2007 (Kaysville, Utah, USA) package program was used for statistical analyses. Descriptive statistical methods were used when evaluating the study data: mean, standard deviation, median, frequency, ratio, minimum, maximum. Skewness test, Kolmogorov Smirnov test, and histogram graphs were used as the criterion of fit for normal distribution in numerical data. Chi-square and Fisher’s tests were applied with categorical data. T-test was used to compare the means between two independent groups with normal distribution. The Mann-Whitney U test was used to compare the medians of two independent groups in a distribution that did not show normal distribution. Spearman test was used for correlation analysis in numerical data. Logistic regression analysis was applied while investigating the effect of parameters on exitus. The statistical significance level was taken as p< 0.05. 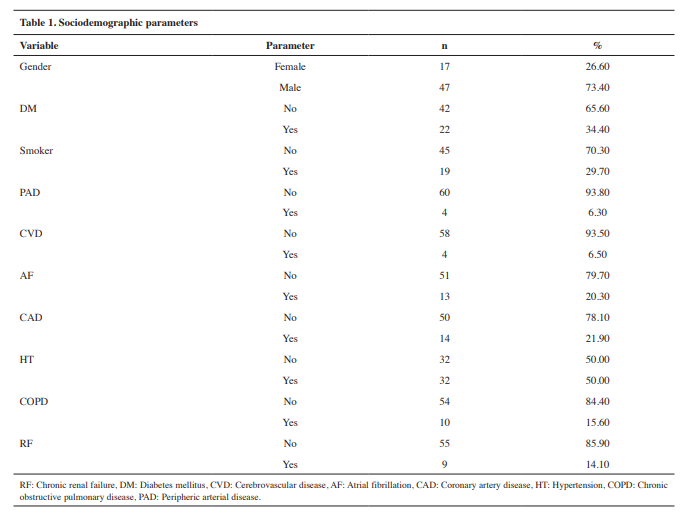 In the postoperative follow-up, 10 patients (15.6%) had sepsis. There was no statistically significant difference in terms of exitus between patients with and without signs of sepsis (p> 0.05). When the sociodemographic data (Table 2) were examined in terms of sepsis, the rate of sepsis was higher in patients with hypertension, history of comorbidities, ischemic heart disease, and smoking history and in male patients (p< 0.05). There was no statistically significant difference between the groups with and without sepsis in terms of the history of previous CVD (Cerebrovascular disease), history of peripheral artery disease, chronic kidney disease, COPD, DM, history of intubation, and CPR in the preoperative period, and history of previous operation (p> 0.05).

Table 2. The relationship of preoperative sociodemographic parameters with sepsis
× 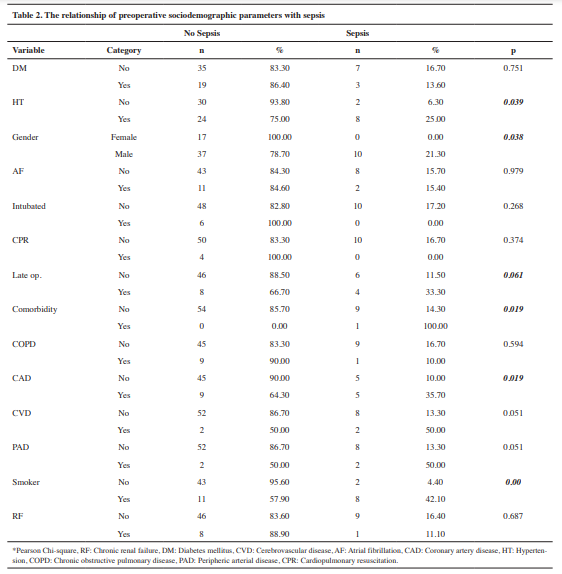 Forty-five (70.3%) of the patients had their chests (Table 3) closed in the post-operative period. The chests of nineteen patients (29.7%) could not be closed and resulted in exitus (p< 0.001). The mean closure time of the patients whose sternum was closed was 62.51 ± 76.58 hours. Mean closure time was 144.01 ± 1.77 hours in patients with DSWI. In the patient group without DSWI, the mean duration was 42 ± 2.02 hours. There was a significant difference between closure time and mortality, but the closure time was longer in the exitus group (p< 0.01). The closure time was longer in patients who were culture-positive, had previous operation history, postoperative acute renal failure, surgical site infection, and postoperative bleeding revision or surgical revision (p< 0.05). However, there was no statistically significant difference in terms of the possibility of sepsis (p> 0.05).

In terms of early mortality (Table 4), 27 patients (42.2%) died. In the preoperative period, there was a significant difference in terms of early mortality in emergency cases and patients with a history of intubation and CPR compared to the elective surgery group and those without a history of intubation. The rate of exitus in this patient group was significantly higher (p< 0.05). Gender, DM, hypertension, COPD, AF rhythm, previous operation history, presence of ischemic heart disease, previous CVD, history of RF, history of peripheral artery disease, and smoking history did not affect early mortality (p> 0.05). When the patients who died and those who did not were compared, there was no statistically significant difference between the two groups in terms of the effect of the length of stay in the intensive care unit (p> 0.05). The duration of hospitalization was shorter in the group who died (p< 0.05). 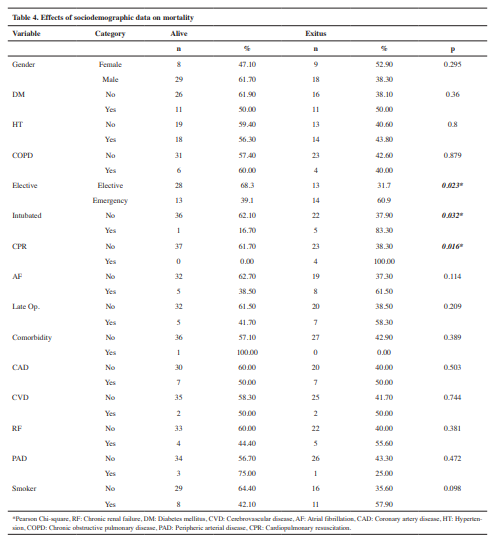 There was growth in culture in 28 patients (43.8%). When the effect of culture growth on sepsis and mortality was examined, there was no statistically significant difference between the two groups (p1= 0.069, p2= 0.678, respectively).

When the preoperative data were examined (Table 5), the WBC levels, neutrophil levels, and CRP levels were higher in emergency patients. In this group, the lymphocyte count was lower and cross-clamp time and sternum closure time were longer. Neutrophil/lymphocyte ratio and platelet/lymphocyte ratio were higher (p< 0.05). There was no statistically significant difference between emergency and elective patients in terms of age, BMI, EF (ejection fraction), urea/creatinine levels, hemoglobin and hematocrit levels, platelet levels, operation time, and CPB duration (p> 0.05).

Table 5. Preoperative parameters of the cases by elective status
× 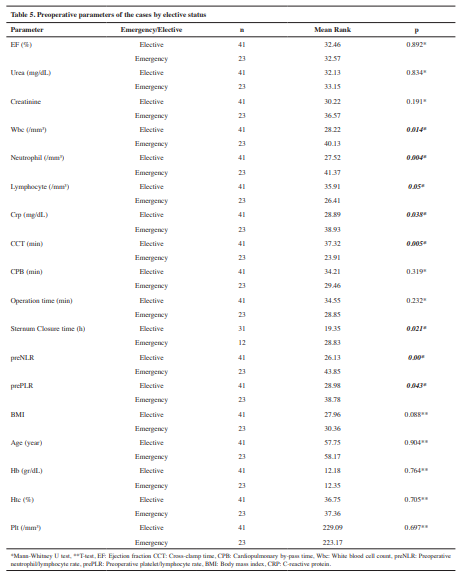 The effect of postoperative complications on sepsis is shown in Table 7. The rate of sepsis was higher in patients with postoperative complications. In the postoperative period, there was no significant difference between the patients in terms of sepsis, pulmonary infections, SVO, surgical revision, bleeding, and culture positivity (p> 0.05). There was no significant difference in terms of sepsis in patients whose sternum could not be closed in the late period (p> 0.05). Postoperative acute renal failure, wound infection, and ECMO/intraaortic balloon pump (IABP) support use were statistically significantly associated with sepsis (p< 0.05).

Table 7. The effect of postoperative complications on sepsis and mortality
× 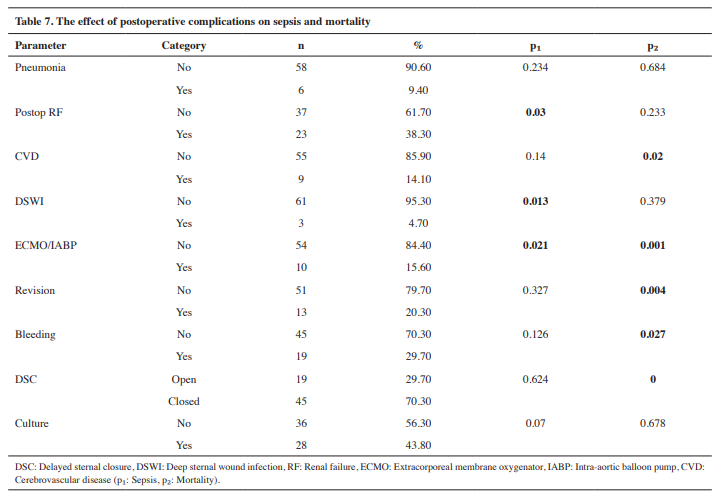 Several factors play an important role in the preoperative and intraoperative early period in patients with delayed sternal closure (DSC). It is a frequently used method in criticallyill patients with myocardial edema, unstable hemodynamics, high risk of bleeding, LCOS, and in need of mechanical support with an extracorporeal membrane oxygenator. In patients whose sternum cannot be closed, the DSC procedure may increase the risk of infectious complications, but it is a method that increases cardiac performance by increasing the end-diastolic filling and thus eliminating the pressure effect of the chest wall together with mediastinal edema. There is a compression effect of the chest wall on the heart and a clinical picture similar to cardiac tamponade. On the other hand, it may increase the susceptibility to malignant arrhythmias together with its compression effect(7).

Prolonged operation time, total bypass time, cross-clamp time, and uncontrollable bleeding after grafting are common in patients with aortic dissection(8,9). Fathi et al. reported that the mortality rate is higher in patients with a history of DM and who received emergency treatment(5). Wong et al. reported an increase in operative mortality with age, hypertension, cardiogenic shock, preoperative CPR, and in redo patients(6). In our study, early mortality was higher in patients with a history of intubation, CPR, and emergency admission in the preoperative period. There was no significant difference in terms of sepsis and mortality in redo patients.

While mediastinitis or deep sternal wound infection is seen in 1-2% of patients after all open-heart surgeries, this rate was reported to be 5% in the DSC patient group(10). Similarly, Wong et al. reported 3% DSWI for the entire group of DSC patients who underwent open-heart surgery in their study of 201 patients(6). While the DSWI rate was 5.3% in 212 patients involved in the study by Boeken et al.,(1) this rate was 4.7% in our study.

In the DSC patient group, an increase in the rate of blood transfusion due to bleeding in the early postoperative period, prolonged mechanical ventilation and pulmonary infection, acute renal failure, and length of stay in the intensive care unit and hospital are among the factors affecting mortality. Early and long-term results are poor in patients with DSWI-induced mediastinitis. Mediastinitis-induced exitus rates were reported in the range of 10-47%(10). In our study, early mortality was 42.2%.

This was a retrospective study. It was designed as a descriptive study and no comparison was possible with a control group.

In conclusion, the application of the DSC procedure should be considered a life-saving method for severe bleeding diathesis, mediastinal edema, severe arrhythmia, and other reasons after open-heart surgery. Accurate timing and close follow-up are important for sternal closure. In these patients, a multidisciplinary approach is required in the postoperative period.

The approval for this study was obtained from Kartal Koşuyolu High Training and Research Hospital Clinical Research Ethics Committee (Decision no: 2021/10/514, Date: 24.08.2021).

Table 2. The relationship of preoperative sociodemographic parameters with sepsis
×

Table 5. Preoperative parameters of the cases by elective status
×

Table 7. The effect of postoperative complications on sepsis and mortality
×