Introduction: Rheumatic mitral valve disease (RMVD) is associated with autoimmune heart valve injury. Parathyroid hormone (PTH) and vitamin D are two essential molecules that have effects on the immune system. In this study, we aimed to evaluate the relationship between PTH and vitamin D in patients with RMVD.

Patients and Methods: We investigated 81 patients with RMVD and 75 healthy subjects. According to Wilkins score, baseline clinical, laboratory, and echocardiographic parameters were recorded, and all RMVD patients were analyzed. Multivariate logistic regression analysis was performed between the groups.

Rheumatic mitral valve disease (RMVD) is the most common cause of mitral valve stenosis worldwide, is more common in developing countries, and progresses faster. It is an immune response that occurs with cross-reactivity between streptococcal antigen and valve tissue(1). Patients who have recurrent acute rheumatic fever carditis are more likely to develop RMVD. Mitral valve can be affected in 50% of patients and results in mitral stenosis, mitral insufficiency, or both(2,3). Inflammation, fibrosis, and calcification are the essential factors in the progression of mitral stenosis due to autoimmune heart valve damage after streptococcal infection. Wilkins calcification scoring is a widely used scoring system to determine the disease’s severity in rheumatic mitral stenosis(4).

Parathyroid hormone (PTH) and vitamin D are the primary regulators of calcium balance and bone mineral turnover. Increased PTH (primary or secondary) levels bear a high risk of cardiovascular mortality and cause cardiovascular diseases such as coronary microvascular dysfunction, valvular calcification, increased vascular stiffness, endothelial dysfunction, and hypertension(5,6). On the other hand, vitamin D, another vital hormone of calcium metabolism, is involved in suppressing the inflammatory process(7). Studies conducted in previous years have shown that low levels of vitamin D are associated with RMVD(8). On the other hand, high levels of vitamin D have been shown to play a role in tissue calcification(9-11). Therefore, abnormally high or abnormally low vitamin D can cause heart valve diseases with different mechanisms.

This study aimed to examine the relationship between PTH, vitamin D, serum calcium, and serum phosphate levels in patients with RMVD.

Data were analyzed using SPSS 22.0 version (SPSS Inc, Chicago, Illinois). The continuous variables with a normal distribution of mean ± SD and t-test are used in group comparison. In contrast, those without a normal distribution are presented as median (interquartile range). Categorical variables are shown as numbers and percent (%). Categorical data were compared using the Chi-square or Fisher’s exact test. Group comparison was performed with the Mann-Whitney U test. Correlations between variables were assessed by the Pearson correlation test for continuous variables and the Spearman test for non-continuous variables. Statistical significance was defined as a p-value <0.05. Multivariate logistic regression analysis was used to determine the independent predictors of the high Wilkins score.

Table 1. The baseline clinical and laboratory characteristics of the RMVD patients and control group
× 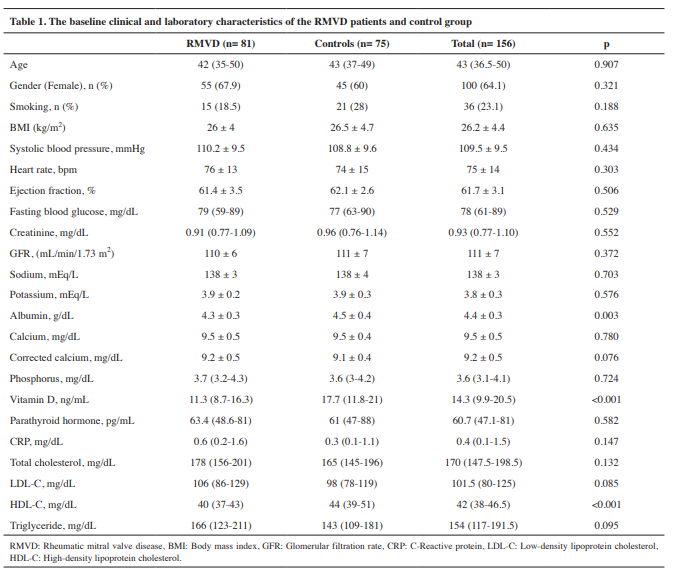 Table 2. Clinical, laboratory and echocardiographic parameters according to Wilkins score
× 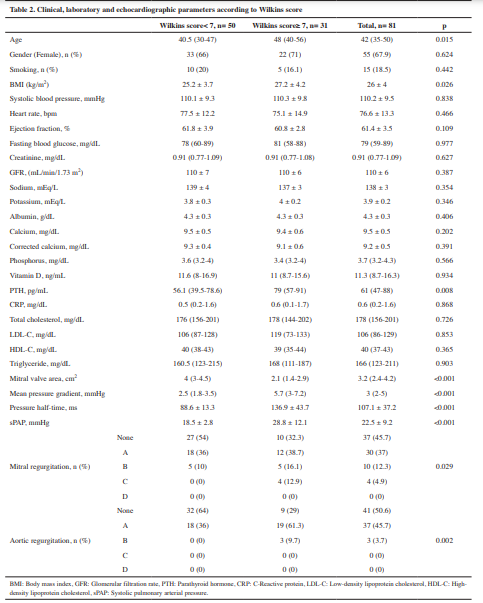 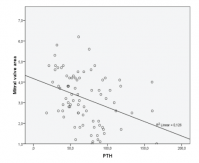 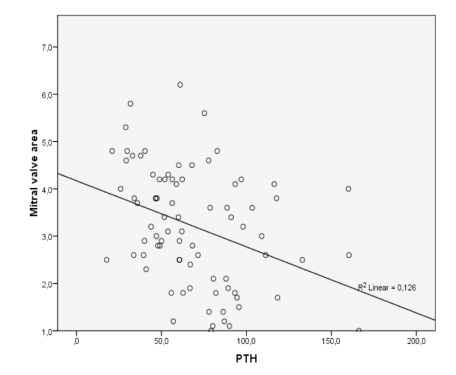 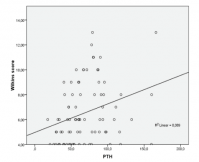 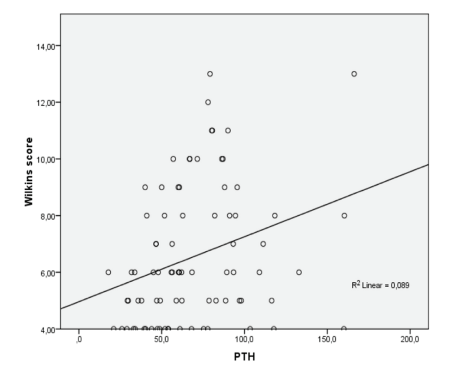 To the best of our knowledge, this is the first study to assess the serum vitamin D and PTH in RMVD. We aimed to evaluate the changes in calcium metabolism at the beginning of the disease. The present study found that vitamin D levels were significantly lower in RMVD than in control subjects. However, there was no significant difference in PTH between the two groups. When patients were grouped according to Wilkins score, the opposite results were obtained. PTH was significantly higher in the high Wilkins score group (Wilkins score≥ 7). Yet, this difference was not significant for vitamin D. When the literature was reviewed, very few studies examined calcium metabolism changes in patients with RMVD. In addition, chronic inflammation, recurrent carditis attacks, low socioeconomic status, and increased PTH levels were associated with a high Wilkins score.

Vitamin D has several effects on T cells that can modulate the immune response(19). This effect occurs through vitamin D receptors (VDR), identified on CD4 + T cells(20). VDRs are in the nuclear steroid/thyroid hormone receptor family and are located in the bone marrow and thymus(21). Besides CD4 + T cells, VDRs have also been identified in mononuclear cells, dendritic cells, and activated B lymphocytes. Vitamin D inhibits the proliferation of effector CD4 + T cells while contributing to the development of anti-inflammatory T cells(22, 23). Vitamin D also inhibits the production of inflammatory cytokines such as TNF-a produced by Th1 helper T cells, ¡ interferon, and IL17 produced by Th17 helper T cells(24,25). Th1 functions are inhibited by IL-4 and IL-10, which were produced by another T cell, Th2. Overberg et al. have shown that vitamin D increases IL-4 levels in in-vivo conditions(26).

Parathyroid hormone (PTH) is the primary regulator of calcium balance in physiological and pathological conditions and plays an essential role in bone hemostasis. PTH may play a role beyond the one in mineral and bone metabolism in the pathophysiology of vascular and cardiovascular diseases. Clinically, patients with primary hyperparathyroidism have a higher risk of cardiovascular mortality and have a broad spectrum of cardiovascular diseases such as coronary microvascular dysfunction, subclinical aortic valve calcification, increased aortic stiffness, endothelial dysfunction, and hypertension(28). Besides, secondary hyperparathyroidism, a significant complication in patients with chronic kidney disease, causes abnormal bone disorders, non-skeletal calcification such as vascular and valvular calcification, and increased cardiovascular mortality. Many studies have shown that high serum PTH levels have a proinflammatory effect. In a study by Cheng et al., a relation was found between high PTH levels and various inflammatory markers (C-reactive protein, the modified Glasgow Prognostic Score, red cell distribution width, and the platelet-to-lymphocyte ratio)(29).

There is a strong relationship between vitamin D and PTH. A decrease in vitamin D levels leads to a reduction in calcium absorption from the intestine, and the organism responds by increasing the secretion of PTH. As a result, there is an inverse correlation between PTH and vitamin D. In a study by Linhartova et al., high PTH and low vitamin D levels are associated with calcific aortic stenosis in coronary artery patients(10). In another study, Eren et al. compared 56 chronic heart valve patients (AR and MR) with the control group. Compared to the control group, vitamin D levels are significantly low, and PTH is higher in patients with heart valve disease(30). Yusuf et al. demonstrated the relationship between the severity of the disease and the PTH level in patients with RMVD(27). In our study, RMVD had higher PTH levels than the control group; however, there were no significant differences between the two groups. According to the Wilkins score, PTH was significantly higher in patients with a high Wilkins score. Apart from the Wilkins score, there is a positive correlation between PTH and the mitral valve area and a negative correlation between PTH and the mean pressure gradient.

In conclusion, in this study, we investigated the inflammatory response caused by the change in PTH and vitamin D levels and the resulting contribution to rheumatic change in the mitral valve. Vitamin D level was lower in patients with RMVD compared to the control group. According to the Wilkins score, the PTH level was significantly higher in patients with a high score. Future studies with larger populations are warranted to clearly identify the relationship between RMVD and vitamin D and PTH.

Table 1. The baseline clinical and laboratory characteristics of the RMVD patients and control group
×

Table 2. Clinical, laboratory and echocardiographic parameters according to Wilkins score
×