Introduction: We hypothesized that long-term morbidity and mortality can be identified by the presence of comorbidities in patients with carotid artery stenosis. In our study we aimed to investigate the relationship between clinical characteristics, laboratory findings and long-term prognosis in carotid artery stenosis patients after stenting.
Patients and Methods: We retrospectively enrolled 212 patients whom underwent carotid artery stenting (CAS) between January 2010 and December 2012 at Kartal Kosuyolu Training and Research Hospital. CAS was performed in symptomatic patients with > 60% stenosis and in asymptomatic patients with > 80% stenosis of extracranial carotid artery. Symptoms were defined by an ipsilateral cerebral or ocular minor or major ischemic event within the past 6 months.
Results: Mean age of study population was 67.4 ± 7.9 years and 158 patients (74.5%) were male. In the follow-up period 18 patients had MI, 18 patients had major stroke, 23 patients had transient ischemic attack. Twenty-one patients (9.9%) died from cerebral-cardiovascular causes. All MACCE was found in 64 patients (30.2%). Multivariate analysis revealed that age (OR: 1.09, 95% CI: 1.02-1.17, p= 0.05), heart failure (OR: 3.78, 95% CI: 1.48-9.62, p= 0.005), creatinine (OR: 3.54, 95% CI: 1.16-10.82, p= 0.026) and neutrophil-lymphocyte ratio (OR: 2.88, 95% CI: 1.90-4.36, p< 0.0001) were independent predictors of the MACCE.
Conclusion: Although, the short-term risk of patients undergoing CAS dominated by lesion-related factors, pre-existing comorbidities may be even more important for the long-term event. Age, heart failure, creatinine and neutrophil-lymphocyte ratio were found as the most important risk factors of MACCE.

Carotid artery stenosis is known as one of the leading risk factors for the development of ischemic stroke(1). Carotid endarterectomy (CEA) in combination with medical treatment of risk factors is currently the standard treatment for patients with symptomatic carotid artery stenosis and some selected patients with an asymptomatic carotid artery stenosis(2). Nowadays, carotid angioplasty and stenting (CAS) has offered as an alternative treatment modality and may be used as a complementary treatment to CEA(3-5). Although periprocedural outcome after CAS has been extensively investigated, risk factors regarding to long-term mortality have not been widely assessed. Unfortunately, prospective long-term data are sparse, and the current advantages and complications of CAS are still debated.

We hypothesized that long-term morbidity and mortality is determined by the presence of comorbidities in patients with CAS and we investigated which parameters were crucial determinants of cerebrovascular events and composite of major adverse cardiovascular and cerebrovascular events (MACCE). This study aimed to investigate the relationship between clinical characteristics, laboratory findings and long-term prognosis after CAS.

We retrospectively enrolled 212 patients whom underwent CAS between January 2010 and December 2012 at Kartal Kosuyolu High Specialization Training and Research Hospital. CAS was carried out in symptomatic patients with > 60% stenosis and in asymptomatic patients with > 80% stenosis of extracranial carotid artery. Based on the European Carotid Surgery Trial (ECST) guidelines, the degree of stenosis was evaluated using carotid Duplex Doppler ultrasound imaging and confirmed by carotid angiography(6). Symptoms were determined by an ipsilateral cerebral or ocular minor or major ischemic event within the past six months. All patients were informed about the nature of CAS procedure and gave their written and oral consent. The Institutional Ethics Review Board of Hospital approved the study protocol.

The procedures performed with using interventional distal protective devices (Emboshield NAV6, Abbott vascular). A 7F or 8F sheath was implanted for having a transfemoral access. closed-cell stent (Xact, Abbott vascular) or self-expandable open-cell stent (Protege, Abbott vascular) were used. The diameter of the stenosis was diagnosed based on the ECST criteria. All lesions were evaluated after the diagnostic procedure using a semiautomatic device (Hicor, Siemens, ErlangenDeutchland). All angiograms were evaluated by at least 2 experienced physicians who were unaware of ultrasonic data and demographic and laboratory characteristics of the patients. Based on current treatment guidelines, acetylsalicylic acid (ASA) 100 mg/day and clopidogrel 75 mg/day were given to the patients at least 5 days before the procedure. Unfractionated intravenous heparin 100 IU/kg was given to provide ACT between 250 and 300 sec. Self-expanding stents were implanted into the stenosed carotid arteries. If needed, the lesion was post-dilated to achieve a residual stenosis ≤ 30% after stent deployment. To prevent bradycardia and hypotension, 0.5-1.0 mg of atropine was routinely administered prior to balloon inflation. The final biplane angiogram of the stented lesion and intracranial views were obtained before retrieval of the protection device. The procedure was determined successfully when the stenotic segment of the carotid artery was dilated up to optimal atmospheric pressure level (Adequate blood flow or residual stenosis below 30% in culprit segment of the artery). In the clinical follow-up, all patients were evaluated by a physician and all symptomatic patients were examined by a neurologist. According to treatment guidelines, anti-platelet therapy was continued after the procedure (clopidogrel for the first 4-6 weeks in asymptomatic patients, 3 months in symptomatic patients and ASA indefinitely).

All patients scheduled for a follow-up visit 1, 3, 6 and twelve months and yearly after the procedure. Information on any adverse event was confirmed with hospital discharge files and the records of death were updated with the National Health System.

Continuous values are expressed as mean ± SD and nominal variables as counts and percentages. For comparisons of categorical data, 2-tailed λ2 statistics and univariate Fisher exact test were used. Student-t test was used for normally distributed independent numerical variables, and Mann-Whitney U used for not normally distributed independent numerical variables. A multiple logistic regression analyses was used to determine the independent preditor of variables on groups, using variables showing marginal association with it on univariate testing (p< 0.10). Results of the logistic regression model are presented as odds ratio (OR) and 95% confidence interval (CI). A P value of less than 0.05 was considered to indicate a statistically significant difference. All statistical analyses were performed with SPSS (Mac version 19; SPSS, Chicago).

From January 2009 to February 2014, a total of 212 patients with carotid stenosis had been successfully treated with CAS at our institution were included in the final analysis. The median follow-up time was 2.5 years, accumulating to 530 years of follow-up. 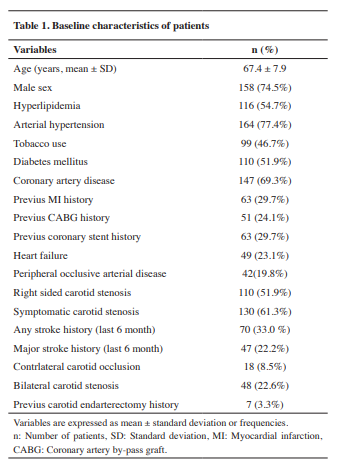 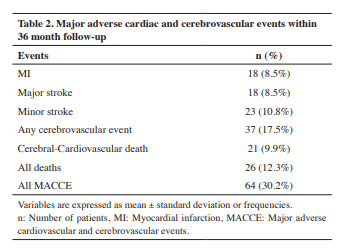 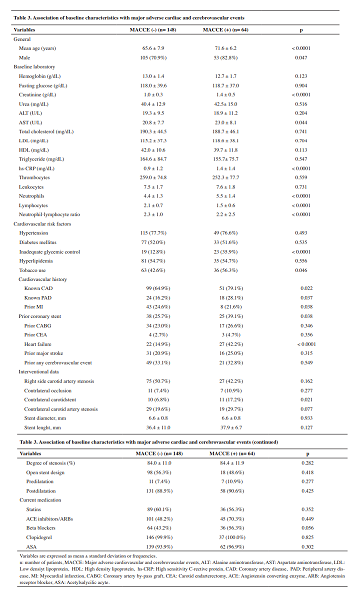 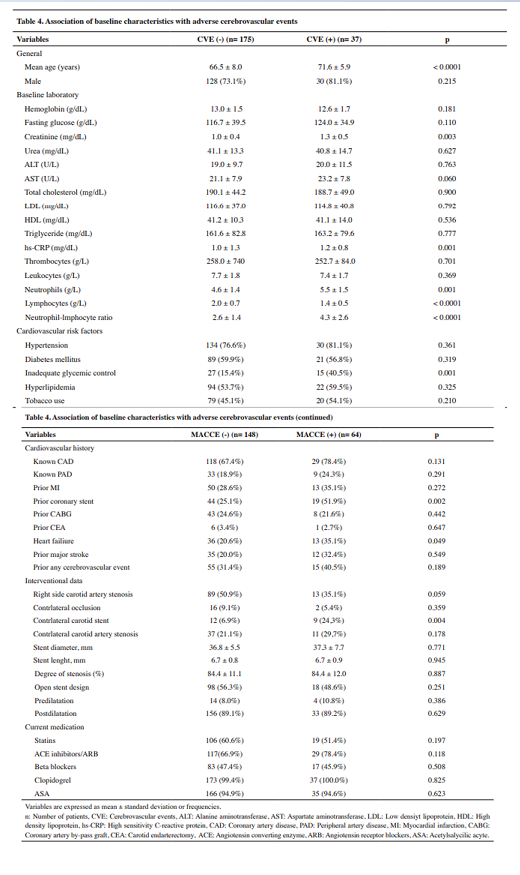 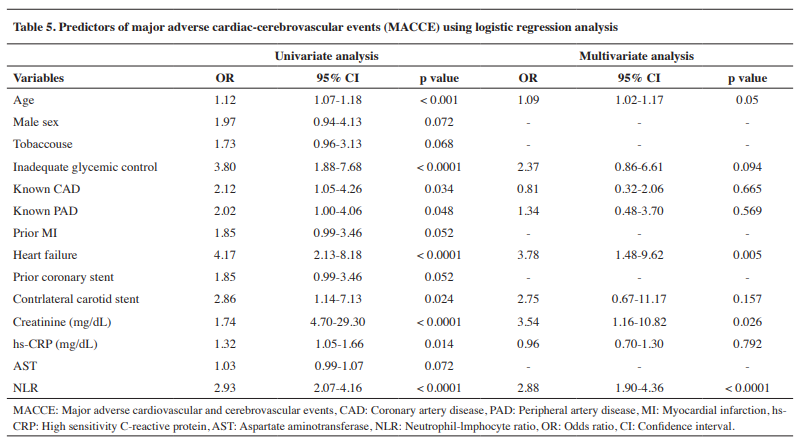 Until now, risk evaluation in patients with CAS has focused on the periprocedural outcome(9-11). Nevertheless, data on long term outcome after CAS are quite rare(12). Available data about risk evaluation of long-term outcome mainly focused on isolated variables(13). Blood NLR is a simple, well-known marker of inflammation that can be easily obtained from the WBC count. Although previous studies have shown that NLR may be an independent predictor of restenosis after CAS, no data have been reported on NLR regarding long term MACCE after CAS(14,15). In our study, NLR was one of the strongest independent isolated predictors of the cerebrovascular event and MACCE. Hs-CRP, a well-known inflammation marker, has been shown to predict short term stroke and death in patients undergoing carotid stenting(16). However, there is no data demonstrating the effect of hs-CRP on long term prognosis in CAS patients. Although we found a relation between hs-CRP and MACCE in the univariate analysis, hs-CRP did not have a significant effect as a predictor in the multivariate analysis. In this context, patients with CAS might benefit from routine WBC count more than hs-CRP levels as an inflammatory marker.

A study reported by Hoffman demonstrated that diabetes with an irregular glycemic control was the strongest independent risk predictor for interventional complications after carotid artery stenting, because of hyperglycemia induced vascular endothelial cell damage with subsequent vasomotor dysfunction and increased extra- and intracellular proliferation, therefore, they strongly advised the correction of an inadequate glycemic control in patients with DM before elective CAS(22). Hoke et al. also found inadequate glycemic control as a predictor of mortality; but we found inadequate glycemic control as only a predictor of cerebrovascular event(17). Although previous studies have shown that patients with chronic kidney disease are at high risk for cardiovascular disease, its effect on longterm MACCE after CAS has not been well investigated. Chronic renal insufficiency has shown as a risk factor for patients undergoing CAS(23). The study of outcomes after CAS in hemodialysis patients, demonstrated relatively poor long-term survival and prohibitive operative stroke and death risk. Therefore, the authors recommended avoidance of CAS in asymptomatic dialysis patients and cautious consideration when planning CAS in symptomatic patients(24). Our findings also suggested creatinine levels as one of the most predictor of long-term MACCE, however, it was not found as a predictor for cerebrovascular events in the multivariate analysis.

In this study, we identified prognosticators of long-term cerebrovascular event and MACCE in carotid artery stenosis patients after CAS. It is so far the longest observation of such a large group of patients in Turkey. The significant clinical value of this study is related to the broad spectrum of patients selected for CAS procedure, the procedures being conducted by the same group of operators, extensive investigations and complex treatment of peripheral and coronary arteries atherosclerosis.

There are several limitations of our study. Some medications may influence the occurrence of clinical adverse events. In particular, statins and platelet inhibitors may play a relevant role in this context. Although we adjusted statistically for the use of these drugs at baseline, we are unable to exclude residual confounding by changes of the medication during the study. Also, the follow-up time is relatively short.

Even though the short-term risk of patients underwent CAS dominated by lesion-related factors, pre-existing comorbidities might be more important for the long-term events. While prior coronary stent, irregular glycemic control, age and NLR were found to be the most important risk factors of cerebrovascular events; age, heart failure, creatinine and NLR also were found as the most important risk factors of MACCE.