Patients and Methods: Seventy-one patients diagnosed with unprotected LMCA disease were divided into two groups according to their mortality rates: survivors (n= 56, 78%) and non-survivors (n= 15, 22%). The mean follow-up duration was 26.0 ± 24.8 months, and all-cause mortality was considered as an endpoint.

Inflammation is inseparable from atherogenesis and related cardiovascular diseases (CVDs)(1). Neutrophilia reflected a systemic inflammatory condition while an association was found between low lymphocyte count and significantly elevated cardiovascular (CV) morbidity and mortality(2,3). As a result, neutrophil to lymphocyte ratio (NLR) emerged as a sensitive marker of inflammation related to worse outcomes in both cardiac and non-cardiac events(4-7).

Patients with left main disease and/or multi-vessel disease have the highest risk of experiencing an adverse CV event among all coronary artery patients(8,9). In studies, many clinical and anatomical scores were reported to show the complexity and severity of coronary artery disease (CAD) both to determine the patient with the highest risk and to choose the appropriate revascularization model in complex coronary anatomy(10). However, these scoring systems are complicated and challenging to apply in clinical practice. Clinical and laboratory markers that have become significant in detecting highrisk patients may replace these systems by providing better prognosis and mortality prediction.

Our study is a single-center retrospective study. We reviewed patients who underwent coronary angiography due to stable angina pectoris, unstable angina pectoris/non–STsegment elevation myocardial infarction (non-STEMI), and STEMI between December 2016 and December 2019 in our hospital. The study included a total of 71 patients diagnosed with left main coronary artery (LMCA) disease and referred for percutaneous coronary intervention (PCI).

STEMI was diagnosed based on the criteria recommended by the American College of Cardiology and European Society of Cardiology (ACC/ESC) guidelines(15) and Non-STEMI was identified according to updated guidelines(16). LMCA disease was defined as angiographic narrowing of >50%.

Patients were divided according to the reason for angiography: Stable angina pectoris, unstable angina pectoris, STEMI, and Non-STEMI. Killip class III and above were used to determine cardiogenic shock which had been previously described as having pulmonary edema or cardiac index of ≤2.0 L/(min/ m2) or systolic arterial pressure of ≤90 mmHg despite a high dose of inotropic medication administration. In all patients, the Killip class was determined during admission(17).

The results of the coronary angiographies were examined, and stent diameters and lengths, procedural techniques, and distal bifurcation lesions were noted. Two independent, experienced cardiologists evaluated the angiograms and calculated the anatomical-based SYNTAX score I (SS) (an angiographic lesion-based scoring system originally invented to evaluate the complexity of CAD) by using coronary arteries with luminal stenosis of ≥50% and a diameter of ≥1.5 mm. Coronary arteries were subdivided into 16 different parts, and each part had a predetermined corresponding weighing factor and determinant factors like calcification and lesion length which were evaluated and used when calculating the SS with the latest online version (https://syntaxscore2020.com/)(18).

The patients’ venous blood tests, taken 24 hours before angiography were examined. Creatinine, high-sensitivity Creactive protein (hs-CRP), and lipid profiles were determined by standard methods. Hemoglobin, total leukocyte counts, and subtypes (including neutrophils, lymphocytes, and monocytes) were obtained using an automated blood cell counter. The NLR was calculated as the ratio of neutrophils to lymphocytes in the same peripheral blood sample.

Hospital Stay and Follow-Up After Discharge

Post-discharge medicines of the patients were recorded. The primary endpoint of our study is all-cause mortality. Inhospital and post-discharge mortality data were obtained from the hospital medical record system and national health records.

Statistical analysis was performed using the IBM SPSS statistics software (IBM Corp., Armonk, NY, USA). The data were expressed as n (%) for categorical variables. The Pearson Chi-square and Fisher’s exact tests were performed for categorical variables. After normal distribution was analyzed with the Kolmogorov-Smirnov test, the data were expressed as median (minimum and maximum values) for variables without a normal distribution and mean ± SD for variables with normal distribution. The student’s t-test was used for comparing quantitative variables with normal distribution, and the MannWhitney U test was applied to compare quantitative variables without normal distribution. Univariate and multivariate logistic regression analyses were used to determine the independent predictors of mortality. Receiver-operating characteristic (ROC) curve analysis was conducted to determine the optimal NLR value to indicate mortality in terms of both sensitivity and specificity. The Kaplan-Meier method was performed to calculate the survival curve using the NLR, and the log-rank test was used for statistical assessment. A p-value of <0.005 was considered statistically significant. 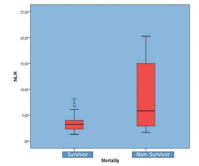 Figure 1. NLR values of patients without and with mortality. NLR: Neutrophil-to-lymphocyte ratio.
× 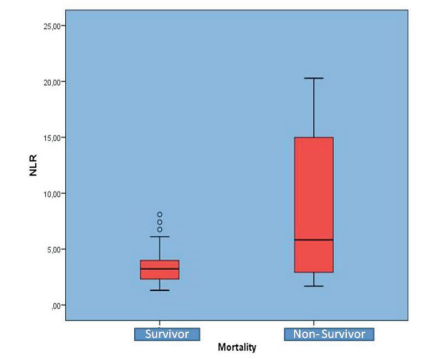 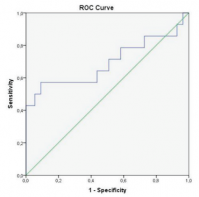 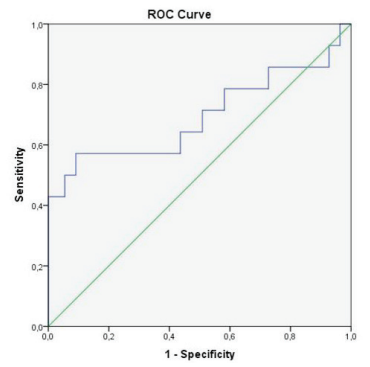 The Low NLR group had a longer follow-up period than the high NLR group (30.0 ± 26.0 months vs. 11.0 ± 13.0 months p= 0.008), and the high NLR group was comprised of more females than males [11 (19.3% ) vs. 7 (50.0%) p= 0.025]. No differences were found between the groups in terms of the reason for hospitalization and characteristics of percutaneous procedure. Table 1 shows a comparison of patient characteristics, the reason for coronary angiography, and characteristics of percutaneous procedure.

Table 1. The baseline demographic, clinical, and laboratory parameters of the study population
× 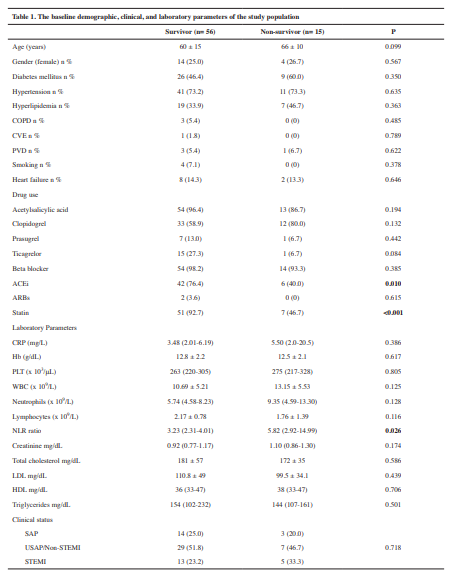 Table 1. The baseline demographic, clinical, and laboratory parameters of the study population (continue)
× 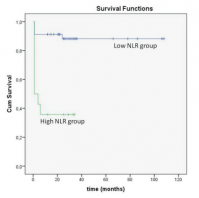 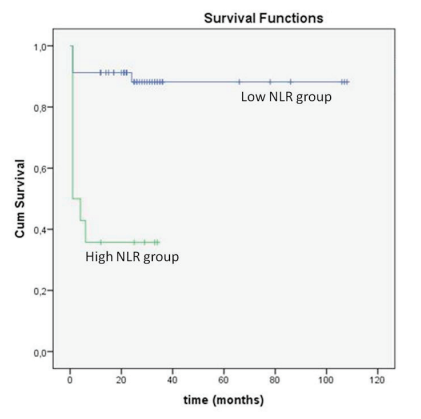 In the present study, a significantly higher NLR value was observed in the non-survivor group than in the survivor group after the evaluation of the patients who underwent unprotected LMCA stenting. The cut-off value of NLR was 5.24 for mortality. The prevalence of all-cause mortality among patients who underwent unprotected LMCA stenting was greater in the high NLR group (>5.24), and the NLR was reported to be the independent predictor for mortality.

Significant LMCA disease is found in 4-6% of all patients who undergo coronary angiography(19). Multi-vessel disease accompanies about 70% of these conditions(20,21). Patients with significant LMCA disease are symptomatic and at high risk of CV events. The three-year survival rate is as low as 37 percent without revascularization(22). CABG surgery is still the first treatment option in patients with LMCA disease according to the recommendations of the current guidelines, in addition, PCI is initially preferred in hemodynamically unstable acute coronary syndrome (ACS) patients and patients who are not fit for operation. In LMCA disease, at least 75% of the left ventricle is at risk so long as it is not under protection (with left anterior descending, circumflex, or patent bypass graft)(22). Therefore, long-term prognosis and the predictors of prognosis are also as critical as revascularization strategy.

NLR is a proven systemic inflammatory biomarker. Many factors affect the onset and progression of atherosclerosis. Inflammation plays an immense role in this process(23,24). Studies reported a strong correlation between high NLR levels and increased mortality and morbidity in a wide spectrum of CVDs including ACS(25-27). Lymphocytopenia occurs due to increased lymphocyte apoptosis during the chronic inflammatory process and neutrophil production increases in the bone marrow. Elevated neutrophil count causes destructive inflammatory response(3,22). Studies revealed a strong correlation between NLR and severity of CAD(28), percutaneous coronary intervention-related CV events(29,30), and complications after CABG surgery(31). Furthermore, clinical studies reported that high NLR levels increased adverse CV and mortality outcomes in stable and unstable CAD(31-33). However, there is no available data in the literature on the prognostic value in patients who underwent LMCA stenting.

NLR has proven prognostic value in PCI-related CV events(26,29,30,34). In their study, Kahraman et al.(35), showed the prognostic value of the severity of CAD for mortality, MI, and stroke in patients with unprotected LMCA stenting. Kaya et al.(25), found a significant relationship between NLR and the severity and complexity of CAD. After the calculation of CAD severity by SS, higher sensitivity and specificity values were revealed when the NLR value was >2.7. In addition, Şahin et al.(36), found a significant correlation between NLR and CAD severity estimated by SS in STEMI patients. In the present study, NLR and SS were found to be significantly higher in the non-survivor group when compared to the survivor group in patients who underwent LMCA stenting. Also, no difference was found between the survivor and non-survivor groups in terms of clinical presentations, yet the incidence of cardiogenic shock was significantly higher in the non-survivor group than in the survivor group. Syntax score did not reach statistical significance in either high or low NLR groups, and cardiogenic shock and NLR were estimated to be the independent predictors of mortality. According to a study by Wada et al.(12), high NLR was related to multi-vessel disease and main coronary artery lesion but was not related to vessel lumen diameter, stent size, or proportion of left artery descending (LAD) culprit. In our study, NLR was not found to be related to the length and diameter of the LMCA stent, kissing balloon, and POT. Among these techniques, only POT was found to be performed more frequently in the survivor group.

Although NLR is obtained by using a simple blood test, there is still no consensus about its cut-off value. In various studies, cut-off values for in-hospital mortality after PCI were found to be 5.44 and 5.9 in STEMI patients(26,37). The cutoff value for short-term mortality was >5.25 in patients with PAD(38). Gürbüz et al.(39) reported an optimal cut-off value of 4.32 in predicting major adverse cardiac and cerebrovascular events (MACCE) for isolated CABG. In a study by Xu et al.(14), an optimal cut-off NLR value of >3.39 was accepted as an independent predictor of LMCA disease and three-vessel disease in patients with AMI after PCI. In our study, the cut-off value was found to be 5.24 for all-cause mortality after LMCA disease stenting. High NLR (>5.24) was found to be associated with all-cause mortality independent of demographic data, clinical presentation, and procedural techniques.

NLR is the combination of two independent inflammatory biomarkers. Former studies found a relationship between both neutrophilia and lymphocytopenia and the risk of independently and strongly elevated complications and mortality in postMI patients(40-46). In our study, no significant difference was found between the survivor and non-survivor groups in terms of hemoglobin, platelet, and lymphocyte subtypes. Also, studies reported a strong correlation between high NLR and other inflammatory markers such as hs-CRP(30). However, in a study by Wada et al.(12), a weak correlation was found between hsCRP and NLR. In our study, no relationship was found between high NLR and hs-CRP. This may be due to the variety of clinical presentations in the study population.

The limitations of our study are its single-center retrospective design and small sample size. Due to these limitations, the cardiac or non-cardiac causes of death were not clearly evaluated. NLR was not compared to any other inflammatory marker (fibrinogen or myeloperoxidase) except hs-CRP.

A periprocedural NLR level greater than 5.24 is an independent predictor of all-cause mortality in patients who underwent unprotected LMCA stenting. As far as we know, our study is the first study in the literature investigating the prognostic value of NLR in patients with unprotected LMCA disease.

Figure 1. NLR values of patients without and with mortality. NLR: Neutrophil-to-lymphocyte ratio.
×

Table 1. The baseline demographic, clinical, and laboratory parameters of the study population
×

Table 1. The baseline demographic, clinical, and laboratory parameters of the study population (continue)
×