Introduction: Active cancer and heart disease, which share similar environmental and biological characteristics, can occur concomitantly. Open heart surgery may be required for these patients when indicated. This study aims to demonstrate the early and long-term results and discuss the intervention strategy in patients with different types of active malignancies, who underwent open-heart surgery.

Results: Eight patients were discharged and two patients died in the early postoperative period. Postoperative left hemiparesis developed in one patient. Six-month, one-year and five-year survival rates were 79%, 37.5% and 25%, respectively.

Conclusion: Open-heart surgery can be successfully performed with acceptable mortality and morbidity rates on the high-risk patient group with active cancer.

Heart diseases and cancer are conditions that carry similar environmental and genetic risk factors(1,2). In the clinical setting, both conditions can be encountered concomitantly in the same patient(3). Invasive cardiological intervention and open-heart surgery may also be necessary in the presence of both active malignancy and heart disease. Coronary artery stenting(4), coronary artery bypass grafting surgery (CABG) (5,6), valve surgery(6,7), and with increasing rates in recent years TAVI (transaortic valve implantation)(8) are performed in many different types of cancer, where appropriate.

In this study, we presented 10 patients with active malignancies who underwent open-heart surgery between 2012 and 2021. We aimed to be a guide for similar situations by addressing the early and late results. 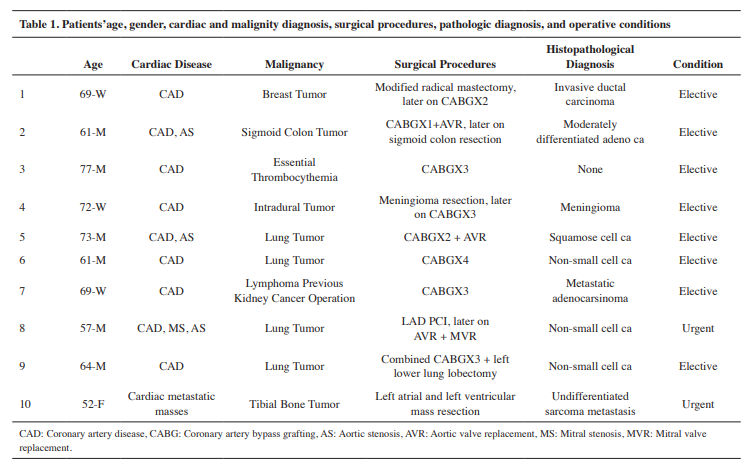 Some of the patients were hospitalized due to myocardial infarction, angina, or other cardiac findings and complaints, before the diagnosis of a malignancy. On the contrary, a group of patients was diagnosed with heart disease after they were diagnosed with malignancy or while they were on treatment.

Six out of 10 patients were in Stage 3-4, the advanced stage. The diagnosis of malignancy was confirmed histopathologically by biopsy in nine patients (Table 1). In the tenth patient, sequential platelet counts were 765.000 and 875.000 in the preoperative hemogram. After a hematology consultation, the patient was diagnosed with essential thrombocytosis. In this patient, platelet counts increased up to 1.099.000 and 1.309.000 on the 8th and 10th postoperative days.

Written informed consent was obtained from all the patients before the operations. The study protocol was approved by the Clinical Research Ethics Committee (2020/13/395, December 8, 2020).

Four patients were operated on with the diagnosis of lung cancer. Three of them were elective and one was urgent. Isolated CABG, CABG+AVR (aortic valve replacement), and CABG+left lower lobectomy were performed in three elective patients. The fourth patient was an urgent case and was receiving chemoradiotherapy in an external center. He presented with marked dyspnea and pulmonary edema in the right hemithorax possibly due to both heart valve disease and advanced stages of lung malignancies. There was no hemodynamic deterioration. Echocardiography revealed advanced aortic stenosis and advanced mitral stenosis. A percutaneous intervention was successfully performed on the critical LAD (left anterior descending) lesion detected on the coronary angiography. Afterwards, mechanical valve and AVR+MVR (mitral valve replacement) were performed on the patient.

The fifth patient, who was also operated on urgently for osteosarcoma and intracardiac metastatic masses, had received chemotherapy. She was operated on urgently because of a large mass in the left atrium and left ventricle, and severe dyspnea due to significant pleural effusion related to the advanced stage of malignancy. Inotropic agents had to be started for hemodynamic stabilization before the patient was taken to the operation.

Eight of our 10 patients were discharged. There were no major complications in seven of the eight discharged patients. Postoperative renal replacement therapy was required in the patient who was operated on urgently for osteosarcoma. Her acute renal failure resolved. Right hemiparesis developed in this patient during follow-up in the unit. She was transferred to the oncology clinic for physical therapy and a new course of chemotherapy. Superficial sternal incisional discharge was observed in the patient with meningioma, and it recovered in a short time with appropriate treatment.

Two of our patients who were operated on for lung cancer and underwent CABG+AVR and left upper lobectomy+CABG died on the 10th and 5th days, respectively, due to low cardiac output. 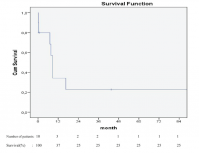 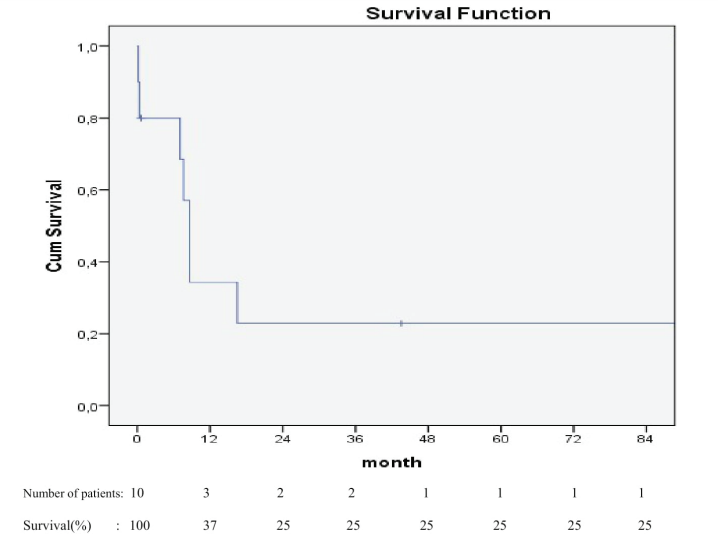 Our early and mid-term results show that surgical treatment can be performed in this high-risk patient group.

In active cancer, the decision of performing an open heart surgery is often made on a patient-by-patient basis. Surgeries are usually performed in Stage one and two groups of patients(9). However, the presence of an advanced tumor is not an obstacle to open-heart surgery. It was reported that 61 of 241 patients who underwent open-heart surgery in the presence of malignancy had Stage 3-4 advanced stage solid organ tumors and more than one organ involvement for hematological cancers(10). In another study discussing aortic valve intervention and malignancy together, it was reported that 13.7% of 614 patients who underwent isolated AVR had metastasis(11). Our six patients; four with lung cancer, one with lymphoma, and one with osteosarcoma, were in advanced stages. Four of them were discharged. We lost two of our patients who had lung cancer. We think that if percutaneous intervention and/or TAVI cannot be performed, the surgical option should not be excluded in this advanced stage patient group which can be advanced symptomatic with fluid accumulation in the lung and which may benefit from surgery.

The results are closely related to whether the malignancy is advanced or elective. In a series of 241 cases in which purely elective cases were included, early mortality was 5.8%(10), and it was found as 14.3% in a study involving 28 patients with only hematological cancers, including emergency cases(12). In cases with advanced cancer, surgical intervention is recommended in cases where the cardiac problem precedes the oncological problem clinically(9). As far as we know, considering the total number of cases, there is no study in the literature in which the number of advanced and emergency cases is higher than the early-stage cases. Six of our ten patients were in the advanced stage. Cardiac problems preceded the oncological problems in all six of the advanced-stage patients. We believe that taking the high risk into account, surgical treatment should be applied in cases where the clinical condition of the patient is good, and TAVI and percutaneous coronary procedures cannot be performed.

There is no objective evidence that cardiopulmonary bypass affects the spread of active cancer. The opinion that extracorporeal circulation will not cause a cancer-related negative effect in the early period(9,12) and long-term(9,13) predominates. Postoperative bleeding and infection complications(14) and the possibility of blood transfusion have been reported to increase (15). However, neither in these publications(9,12-15) nor in any of the publications in the literature that we could reach, there is a mention of a finding that cardiopulmonary bypass increases tumor dissemination.

The rate of patients with active cancer in the entire patient population undergoing cardiovascular intervention can be considered quite low, with rates of 2.5% for cardiac surgery(9) and 1.8% for percutaneous intervention(16). Considering the multiplicity of clinical scenarios, these low incidence rates make treatment protocols more diverse and complex. Therefore, case-based decision-making becomes even more important. In a study comparing TAVI and surgical AVR in patients with active cancer, similar early mortality rates were observed for both interventions, and TAVI had better results in the early period, especially in terms of thromboembolic events(11). In coronary revascularization in lung cancer, PCI in 1-2 vessel disease and surgery in 2-3 vessels are considered(17). All six patients in whom we performed isolated CABG were triplevessel disease patients. The percutaneous intervention was not considered appropriate in our four patients with cardiac mass, valve+coronary disease, and double valve replacement. The close cooperation of cardiology, cardiovascular surgery, oncology, and other related surgical branches will enable the most accurate decision to be made in terms of early-term mortality risk and contribution to the long-term survival of these cases.

The low number of patients is one of the limitations of our study, which makes it challenging to generalize the treatment in certain types of malignancies and accompanying heart diseases. On the other hand, international guidelines regarding the open-heart surgery in the presence of active oncological disease have not been created. Yet, making patient-based decisions in such situations becomes even more important due to the severity of both diseases.

In conclusion, we believe that in active cancer cases, an open-heart surgery can be performed in multi-vessel disease where percutaneous intervention is not appropriate, in combined aortic stenosis and coronary artery disease where TAVI and percutaneous intervention are not considered, and when two valve replacement is required. We believe that the high risk should not be a reason to exclude surgery in the coexistence of two conditions where very different clinical scenarios might occur.

The approval for this study was obtained from Kartal Koşuyolu High Training and Research Hospital Clinical Research Ethics Committee (Decision no: 2020/13/395, Date: 18.12.2020).