Introduction: This study aimed to evaluate whether the development of acute kidney injury (AKI) was associated with preoperative albumin/prealbumin levels and other clinical features in pediatric patients who underwent open-heart surgery for congenital heart disease.

Conclusion: While there was no relationship between eGFR and preoperative albumin/prealbumin levels in patients who underwent cardiac surgery due to congenital heart disease, longer ACCT was found to be associated with decreased eGFR.

Congenital heart diseases are the most common congenital malformation in newborns(1). Survival in newborns with congenital heart disease who undergo surgical correction has gradually increased in recent years. With the increase in survival as a result of the operations performed, various postoperative complications have also become more frequent(2). One of these complications is acute kidney injury (AKI)(3,4).

After pediatric cardiac surgery, AKI can develop depending on many factors. Although the mechanism of AKI development after cardiac surgery has not been shown precisely, it has been shown that various preoperative, perioperative and postoperative variables, and various characteristics of the patient may be associated with the development of AKI(5). The physiological differences of children and the difficulties associated with performing surgery in infants compared to adults have been reported to cause a further increase in AKI development risk after cardiac surgery(6). Many studies have been conducted to determine factors that could enable the prediction of the probability of AKI in these children, in order to be able to take necessary precautions. Low albumin and prealbumin levels can be seen in the preoperative or postoperative period in cases scheduled for open-heart surgery. Numerous prior studies have shown that serum albumin level is an independent determinant for the development of AKI(7-15).

Although the value of various clinical features to predict AKI development has been examined in many studies, there is no clear consensus on this issue. This study aimed to evaluate preoperative albumin/prealbumin levels and other clinical features in pediatric patients who underwent corrective openheart surgery for congenital heart disease, and to determine their relationship with AKI development.

Exclusion criteria: patients who underwent palliative surgery, cases with reoperation, those with liver enzyme(s) elevation, urea elevation, creatinine elevation at baseline, children diagnosed with chronic malnutrition, and those who had undergone emergency operations were excluded from the study.

The RACHS-1 scoring system was used to predict the shortterm mortality of congenital heart surgery. This scoring system consists of 6 risk categories(16).

All analyses were performed on SPSS v21 (SPSS Inc., Chicago, IL, USA). For the normality check, the KolmogorovSmirnov test was used. Data are given as mean ± standard deviation or median (1st quartile-3rd quartile) for continuous variables according to the normality of distribution, and as frequency (percentage) for categorical variables. Repeated measurements were analyzed with the Wilcoxon Signed Ranks test or Friedman’s analysis of variance by ranks, depending on the number of repeated measurements. Post-hoc pairwise comparisons were performed with the Bonferroni correction method. Pearson or Spearman correlation coefficients (depending on the fulfillment of parametric assumptions) were calculated to evaluate the directional relationships between continuous variables. Multiple linear regression analysis (stepwise selection method) was performed to determine significant factors independently associated with renal injury (which was based on eGFR value-used as the dependent variable). Two-tailed p-values of less than 0.05 were considered statistically significant.

The mean age was 13.63 ± 12.05 (range 1.5-60) months. We found that eGFR decreased by more than 75% after the operation in 1% of the cases, while it was decreased by more than 50% in 13% of the cases. Compared to the preoperative period, it was found that urea (24th and 48th hour) and creatinine levels increased at a statistically significant level (p< 0.001, for each), and eGFR decreased significantly in the postoperative period (p< 0.001). The summary of patients’ characteristics is shown in Table 1. 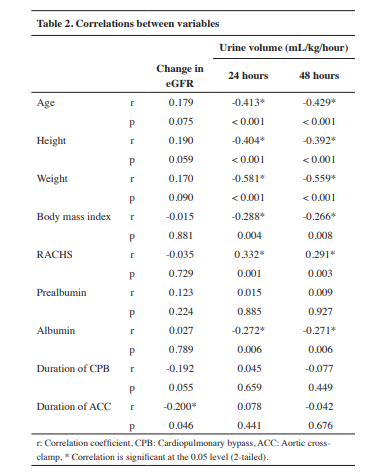 It is important to predict AKI that may develop after pediatric cardiac surgery and to take precautions in this regard. In this study, in which the relationship between the clinical characteristics of congenital heart disease cases and postoperative AKI development was examined, a decrease of more than 50% in the postoperative eGFR value was found in 13% of the cases. There was no correlation between preoperative prealbumin/albumin levels and postoperative change in eGFR values. However, we found that prolonged ACCT was associated with a greater decrease in eGFR.

The risk of AKI increases after congenital heart disease surgery(3,4). Although we did not use a clear criterion for the detection of AKI in our study, it was determined that eGFR decreased more than half in approximately 1 out of 8 patients who underwent open-heart surgery due to congenital heart disease, which was in accordance with the literature. Previous studies have failed to elucidate the mechanism of AKI after cardiac surgery, and thus, it has been suggested that various variables cumulatively lead to AKI. Although preoperative albumin/prealbumin levels were the primary focus of our study, various other factors including perioperative, postoperative features, and patient characteristics have been associated with AKI development(5). Unlike adults, AKI can develop in newborns in relation to physiological properties or restrictions, including parameters such as inadequate renal functions and stronger inflammatory reactions, while longer CPB duration is also reported as a factor(6).

It has been shown in previous studies that various parameters examined in the preoperative period can predict postoperative AKI. One of the most commonly identified parameters shown to predict AKI after cardiac surgery is preoperative albumin level. In a study investigating risk factors associated with the development of AKI in pediatric patients undergoing cardiac surgery, Lee et al. reported that preoperative serum albumin levels were associated with the development of AKI (OR: 0.506, 95% CI: 0.325-0.788). Their results also described age, pulmonary hypertension, and duration of CPB as other risk factors for AKI development(9). Findik et al. reported that the preoperative albumin level of patients undergoing isolated coronary artery bypass graft surgery (CABG) was associated with postoperative AKI, renal replacement therapy, and mortality(10). Similarly, it has been shown in various studies that low preoperative albumin levels in patients undergoing cardiac surgery significantly increase the risk of postoperative AKI development(11-14). In addition to these direct relationships, preoperative albumin supplementation has been reported to have positive effects on patients undergoing cardiac surgery. For instance, in a randomized controlled trial involving adults with hypoalbuminemia who were scheduled for cardiac surgery, Lee et al. compared two patient groups (exogenous albumin vs. saline) in terms of postoperative AKI development. They reported that the incidence of postoperative AKI was significantly lower in patients who were administered albumin. As a result, the authors emphasized that albumin supplementation had a protective effect on the kidney in this group of patients(17). Although fewer studies have evaluated the relationship between prealbumin and postoperative AKI (compared to albumin), it has been suggested that serum prealbumin levels can predict the development of postoperative AKI, similar to the utility of albumin(15). Contrary to these studies, in our study, it was observed that there was no significant relationship between preoperative prealbumin or albumin values and eGFR change in patients who underwent open-heart surgery for congenital heart disease. This difference may have resulted from the fact that the AKI development status was not determined by standard criteria, and the evaluation was made with the respect to eGFR change in our study. However, considering the close relationship between renal function and eGFR, our results have value in terms of questioning the current approach to the assessment of AKI risk in children scheduled for cardiac surgery.

The retrospective and single-center design of the present study are its most important limitations. For this reason, various variables that may affect the results may not have been examined, and these omissions may have resulted in bias. Secondly, as mentioned previously, renal functions were interpreted through the assessment of eGFR change. In other words, this study was designed with the consideration that eGFR changes could be representative of AKI. It is, therefore, possible that different results could be obtained by using different AKI diagnosis criteria in this study population. Thirdly, AKI development can be affected by various comorbidities which were not examined in our study. The type of congenital heart disease leading to correctional surgery, the complexity of the surgery, and the skill of the surgeon may also be associated with the subsequent development of AKI. The effect of these variables on the results has not been examined. Finally, in our study, the difference in eGFR was limited and a change of more than 50% was present in only a small number of patients (13%).

While there was no relationship between eGFR change and preoperative prealbumin and albumin levels in pediatric patients who underwent cardiac surgery due to congenital heart disease, ACCT was found to be the only parameter associated with decreased eGFR in linear regression analysis. Although the development of AKI was not examined according to standard criteria, our results show that ACCT could be related to the development of AKI –based on its relationship with eGFR. We recommend using standard criteria in determining AKI in future studies and conducting prospective and comprehensive studies that would enable patient stratification and the determination of confounding variables in this heterogeneous population.

This study was approved by the Institutional Research Ethical Committee of Kartal Koşuyolu High Specialization Training and Research Hospital (Decision no: 2021/7/498, Date: 13.07.2021).