The detrimental effects of right ventricular apical (RVA) pacing on left ventricular function has been demonstrated by several studies. RVA stimulation leads to an abnormal activation sequence, leading to asynchronous ventricular contraction(1-3). In the normal heart, depolarization rapidly spreads from left to right and from apex to base while the earliest activation initiating from the middle part of the left-sided interventricular septum (IVS) and spreading towards the apex and LV free wall before reaching right ventricular (RV) free wall(4). Because of this electrical spreading pattern, right and left ventricular free wall contraction follows contraction of the septum(5). Serious alterations in the formation, spreading direction and speed of electrical impulse are produced during RVA pacing which affects the mechanical properties of the heart(6-9). Significant changes in the cellular level of the myocardium is also shown with RVA pacing in animal and human studies(2,10,11).

Although the different definitions are present in several studies, the frequency of Pacing Induced Cardiomyopathy (PICM) is reported to be between 5-20%(12). In these studies, the most pronounced risk factors for PICM are paced and native QRS width and pacing percentage which suggest that electromechanical asynchrony plays the most important role in physiopathology(13-16).

Tissue Doppler Imaging (TDI) and 2D echocardiography can be used to evaluate both global cardiac functions and ventricular asynchrony. In this study, we aimed to evaluate systolic and diastolic asynchrony in the slowest to fastest pacing rhythm in patients with RVA pacing and to compare the dynamic changes in the asynchrony parameters obtained by TDI and volumetric parameters obtained by 2D echocardiography

We included 23 patients who underwent permanent pacemaker implantation for sick sinus syndrome, complete AV block or slow ventricular rate atrial fibrillation (18 VVI, 5 DDD) in this study. The age of the patients mean 43 ± 18, and pacing durations were between 1-144 months (mean 33.0 ± 36.5 months). The study was approved by the local ethics committee (Date: November 10, 2020; Decision no: 2020/14/417) and was conducted in accordance with the requirements of the Declaration of Helsinki. An informed consent letter was obtained from all the patients.

To evaluate the effect of RVA pacing, all DDD coded pacemaker program were changed to VVI mode to achieve RV apical pacing. Pacemaker rate was increased by 20 beats per minute starting from the lowest rate that the pacemaker is activated. The study is finished when 80% of the maximum predicted heart rate (220-age) was reached or when the patient desires (peak heart rate, mean: 130/minutes).

In the left lateral decubitus position, 3 cardiac cycles were recorded for each heart rate under expiratory apnea with Vivid 7 (GE Vingmed Ultrasound, Horten, Norway) echocardiography device, from apical 4 chambers, 2 chambers and long axis windows. The recordings were analysed by 2 individual physicians (ET, TA) if there is a significant mismatch in the results, it was decided according to the result of consensus. We used EchoPac for PC (GE Vingmed Ultrasound). Left ventricular end-diastolic volume (LV EDV), end-systolic volume (ESV) and ejection fraction (EF) were calculated from apical 2 and 4 chamber views with the Simpson equation. Color TDI images were recorded in the highest possible frame rate and the correction angle was kept under 30 degrees. TD velocity curves were obtained from the basal and mid septum, lateral, inferior, anterior septum and posterior walls and the amplitudes of these velocities were recorded. Time from the initiation of the Q wave of the simultaneous ECG recording to the peak of systolic velocity (T-Sm) and to the diastolic E wave peak (T-Em) was measured and recorded in each segment. The standard deviation of the T-Sm values (TsSD) measured from 12 segments and the septolateral delay (SLD) durations obtained from septum and lateral walls were used for asynchrony parameters and standard deviation of the T-Em values measured from 12 segments (TeSD) were used for diastolic asynchrony parameter.

Findings in the Basal Heart Rate

When the study patients are grouped in two according to EF values (EF < 45% and EF ≥ 45%), it was observed that mean Sm values obtained from 12 segments (Sm mean), Sm values obtained from the basal septum and basal lateral walls (Septal and Lateral Sm) and mean value of basal septal and basal lateral wall Sm values (Sm E mean) were lower in patients with systolic dysfunction group (5 patients) compared to patients with normal systolic function (18 patients) (Table 1).

Evaluation of systolic and diastolic asynchrony parameters in basal heart rate and the effect of asynchrony over EDV, ESV and EF.

Table 2. Comparison of EF, EDV and ESV values between basal asynchrony and basal no asynchrony group by TsSD
×

Table 3. Comparison of EF, EDV and ESV values between basal asynchrony and no asynchrony group by SLD
× 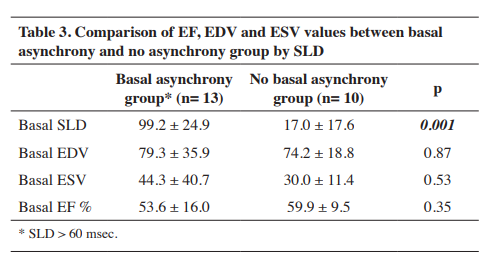 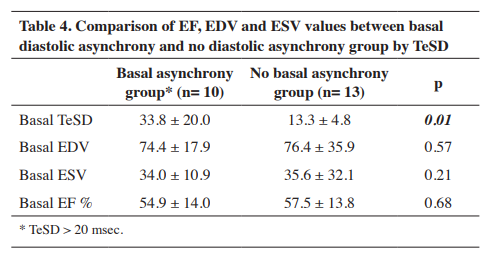 Evaluation of basal asynchrony parameters of patients with and without systolic dysfunction.

When the patients are grouped in two according to EF value (< 45 and ≥ 45), there was no statistically significant difference between asynchrony parameters such as Ts-SD, SLD duration and TeSD value (Table 5).

Table 5. Comparison of systolic and diastolic asynchrony parameters in terms of EF
×

The relationship between patient age and implantation duration and basal systolic and diastolic asynchrony parameters.

Comparison of Asynchrony Parameters in Basal and Peak Heart Rates

Table 6. Dynamic changes in EF, EDV and EF in different asynchrony groups according to TsSD
× 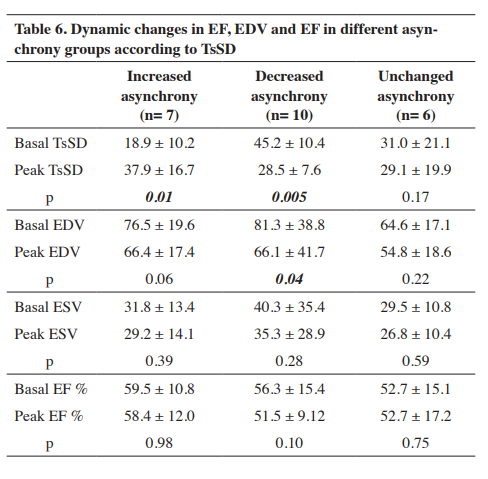 Table 7. Dynamic changes in EF, EDV and EF in different asynchrony groups in terms of SLD
× 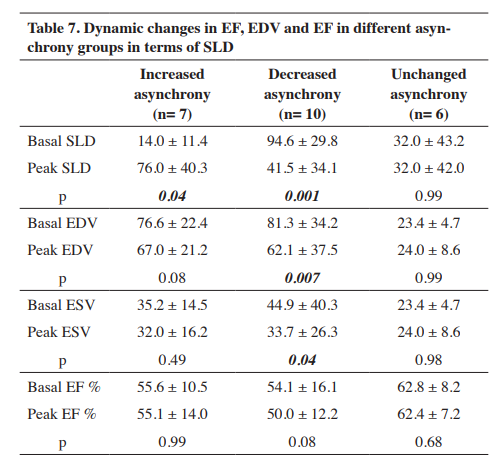 In our color TDI study performed with the pacemaker population tissue velocities were found to be significantly lower in the reduced EF group. Measurement of tissue velocities from basal segments with TD is also an easy method in this group of patients. At periodic follow-up of the patients following pacemaker implantation, the power of detecting and predicting the development of systolic dysfunction by TD method might be evaluated.

Another significant finding of our study is the positive correlation between the development of systolic asynchrony and time interval from the pacemaker implantation. Delay was most common in the lateral wall as demonstrated in several asynchrony studies about Left Bundle Brunch Block (LBBB)(17). Although in our study there was no significant difference in the asynchrony parameters of patients with and without systolic dysfunction, this finding suggests that systolic dysfunction may be developed after an uncertain period of asynchrony. Probably delay in the conduction of electrical impulse produces a similar synchronization disorder in patients with a permanent pacemaker and normal EF. In the pacemaker population frequency of cardiac pathologies resulting in systolic dysfunction and asynchrony is high and exclusion of such pathologies in our study may be caused by underestimation of both parameters(18,19). In the pacemaker population during periodic follow-up and in circumstances that needing echocardiographic examination such as changes in patient’s functional status asynchrony evaluation can give additional information besides 2D echocardiography.

In light of the mean values of systolic asynchrony parameters evaluated by both TsSD and SLD durations (32.75 ± 17.93 msec and 63.47 ± 46.96 msec, consecutively), asynchrony is shown to be very common in patients with a permanent pacemaker. The presence of asynchrony in 14 patients (61%) with TsSD and 13 patients (56%) with SLD durations during RV apical pacing has shown that during periodical follow-ups of patients with a permanent pacemaker, routine echocardiographic parameters are not sufficient.

Observed high correlation between SLD duration and TsSD levels in both basal and peak heart rates (0.99 and 0.83 consecutively) suggests that asynchrony evaluation in pacemaker population may be performed by SLD duration which is relatively easier to be measured, compared to TsSD measurement.

Possible deleterious effects of right ventricular apical pacing on left ventricular function has been demonstrated in several studies. Batista et al. evaluated 20 patients for up to 24 months after pacemaker implantation and reported statistically significant variation in time on conventional echocardiography and dyssynchrony parameters(20). In another study, Kachboura et al., prospectively investigated 43 patients with RV apical pacing for 18 months. They observed the development of congestive heart failure in 25% of the patients, decreased EF and increased NYHA compared to preimplantation values(21).

To overcome the deleterious effect of RV apical pacing on LV functions, the superiority of many non-RV apical pacing locations were investigated in several studies. Yu et al., compared the effects of atrial (AAI), septal (DDDspt) and apical (DDDapx) pacing on LV mechanical performance and contractile synchronism before and within 72 hours of pacemaker implantation at different programmed rates and reported that RV septal pacing revealed the better mechanical performance and less ventricular contractile asynchrony compared to RV apical pacing(22). In another study, Gong et al., compared RV outflow pacing (RVOT) with RV apical pacing in terms of ventricular synchrony, cardiac functions and remodeling in 96 patients with normal ventricular function. After 12 months of pacing, they reported more severe systolic asynchrony in the RVA pacing group and similar diastolic synchrony in both groups. Mean systolic (Sm), early diastolic (Em) velocities, LV EF, LV end-diastolic and systolic volumes were similar. They concluded that despite the presence of more synchronous LV contraction by RVOT pacing, it revealed no benefit over RVA pacing with respect to preserved LV systolic functions and cardiac remodelling(23). Recently, his bundle pacing (HBP) has gained the interest of maintaining more physiologic electrical activation compared to RVA pacing. Catanzariti et al. implanted an HBP lead and an RVA lead as back up to 26 patients. After almost 3 years of HB pacing, pacing modality was changed to RVA pacing temporarily and they observed significantly decreased EF, increased mitral regurgitation, worsened interventricular delay compared to HB pacing. During RVA pacing, the asynchrony index was significantly higher, however, the myocardial performance index was similar between two pacing modalities(24). Although HB pacing is the closest modality to normal physiology, difficulties in the implantation technique, unsatisfactory results observed in patients with wide QRS complex and short battery life brought LBB pacing as an alternative technique, recently(25,26).

Asynchrony is an alteration in the harmony of ventricular contraction which can result from disturbing electrical conduction or myocardial organic diseases. Although advances in echocardiography technology provide important information about the presence and severity of asynchrony, the best echocardiographic technique is yet to be determined(27). Adverse factors in the applied technique, such as interobserver and intra-observes changes, the importance of image quality, angle dependence of some techniques, absence of clearly defined asynchrony parameters and inter-technical differences produce difficulties and identification and evaluation of asynchrony. Also, evaluation of asynchrony at rest and obtaining normal or near-normal asynchrony parameters might underestimate patients with exertional symptoms. The significant individual differences in the alterations of TsSD and SLD durations and directions in basal and peak heart rates that are observed in our study patients gave us an important point of view in the evaluation of patients with permanent pacemaker especially for the patients with restricted exercise capacity but normal 2D echocardiographic findings.

In patients with low TDI velocities, the possible benefits of alterations of medical treatment strategies and pacing modalities over primary protection against heart failure should be investigated.

A limited number of patients and absence of follow up results and lack of Electrocardiographic parameters such as QRS durations are the most important limitations of this study. Patients’ clinical and functional status data that added to echocardiographic findings can give more information about the pacemaker population in terms of asynchrony and its clinical implications.

Table 2. Comparison of EF, EDV and ESV values between basal asynchrony and basal no asynchrony group by TsSD
×

Table 3. Comparison of EF, EDV and ESV values between basal asynchrony and no asynchrony group by SLD
×

Table 5. Comparison of systolic and diastolic asynchrony parameters in terms of EF
×

Table 6. Dynamic changes in EF, EDV and EF in different asynchrony groups according to TsSD
×

Table 7. Dynamic changes in EF, EDV and EF in different asynchrony groups in terms of SLD
×