Introduction: Mitral annular calcification (MAC) is a chronic degenerative condition characterized by calcification of the fibrous tissue surrounding the mitral valve. Conditions such as prosthetic valve dehiscence and atrioventricular groove separation may occur in patients with MAC who undergo mitral valve replacement (MVR). The aim of this study was to investigate what measures can be taken in the intraoperative/postoperative period to reduce postoperative paravalvular leak (PVL) rates, complications, mortality and morbidity rates among patients with MAC undergoing MVR.

Results: The study included a total of 46 patients, 16 males (34.8%) and 30 females (65.2%). The mean age of patients was 62 ± 11.6. The analysis of intraoperative data showed that cross-clamp time and cardiopulmonary bypass time in Group 2 were significantly longer than other group (p< 0.001). In the postoperative period, postoperative day 0 and total drainage amount, blood product requirement, development of postoperative acute kidney injury, hemodialysis/hemofiltration requirement, and need for extracorporeal membrane oxygenation (ECMO) and inotropic treatment were found to be significantly higher in Group 2. In the postoperative echocardiography data, no significant difference was found between the two groups in terms of PVL rates.

Conclusion: Cross-clamp time and cardiopulmonary bypass time were found to be higher in patients with MAC receiving both MVR and additional procedure compared to those who underwent MVR and more complications were observed in these patients. Additional surgical procedures did not affect paravalvular leak rates and mortality rates among the patients with MAC.

Mitral annular calcification (MAC) is a chronic degenerative non-inflammatory condition characterized by calcification of the fibrous tissue surrounding the mitral valve. The prevalence of MAC is estimated to be 3-9% in patients undergoing mitral valve replacement (MVR)(1). Increased cardiovascular diseases, diseases of the mitral valve, arrhythmias, and incidence of sudden cardiac death have been found to be associated with MAC(2). Performing MVR in the presence of MAC is estimated to be associated with poor surgical outcomes. The presence of MAC can damage the fixation sutures of the mitral prosthetic valve, leading to paravalvular leakage and worsening of the patient’s clinical condition(3). In some centers, an approach involving the complete resection of calcification and reconstruction of a new annulus from the pericardium is used for MVR. However, these approaches are not widely used and there are doubts that they increase the surgical risk(4). MacVaugh et al. explained the fatal complications developed in patients with MAC undergoing MVR in detail(3). These results are still associated with conditions that can be fatal if not noticed in time, such as severe circumflex artery injury and atrioventricular groove separation in the posterior commissure. Considering these issues, some researchers have obtained promising outcomes by adopting an approach involving a mild decalcification application and then, prosthetic valve implantation(5). In this study, we aimed to compare the postoperative echocardiography (Echo) results, paravalvular leak (PVL) rates, complications, and mortality rates of patients with MAC undergoing MVR and tricuspid valve intervention with those of patients who underwent MVR, tricuspid valve intervention, and additional surgical procedure.

Preoperative and perioperative surgical protocol and the anesthesia induction and maintenance were performed in accordance with the standard procedures. Aortic arterial cannulation and bicaval venous cannulation were performed with the standard median sternotomy approach. In redo patients (n= 9, 19.6%), right femoral arterial and venous cannulation was performed. Antegrade cardioplegia cannula was placed in the aorta and since surgical teams used different methods, retrograde cardioplegia cannula was placed from the coronary sinus in some patients (n= 30, 65.2%). Following cardiopulmonary bypass (CPB), aortic cross-clamping was performed.

Moderate hypothermia was applied to the patients. During cross-clamping, blood pressure was maintained to be 60- 80 mmHg. Antegrade cardioplegia was given intermittently. Cardioplegia was delivered continuously via the coronary sinus in patients with a retrograde cannula. Standard left atriotomy incision was made. Mitral valve surgery examination was performed. Then, mitral valve excision was performed and calcifications in the mitral annulus were removed. Pledgeted 2-0 sutures were used in the mitral annulus to place the prosthetic valve intraocularly. Then, the left atriotomy was closed. After performing the additional procedures required, the cross-clamp was removed. After sufficient cardiac output was achieved, CPB was ended.

Statistical analysis was performed using SPSS version 21.0 software. In the evaluation of the data, descriptive statistical methods such as mean and standard deviation were used for quantitative variables. Categorical variables were given as frequency percentages. T-test and Mann-Whitney U test were used to compare quantitative parametric and non-parametric data between the groups whereas the Chi-square test was used to compare qualitative data. A p value of < 0.05 was considered statistically significant. 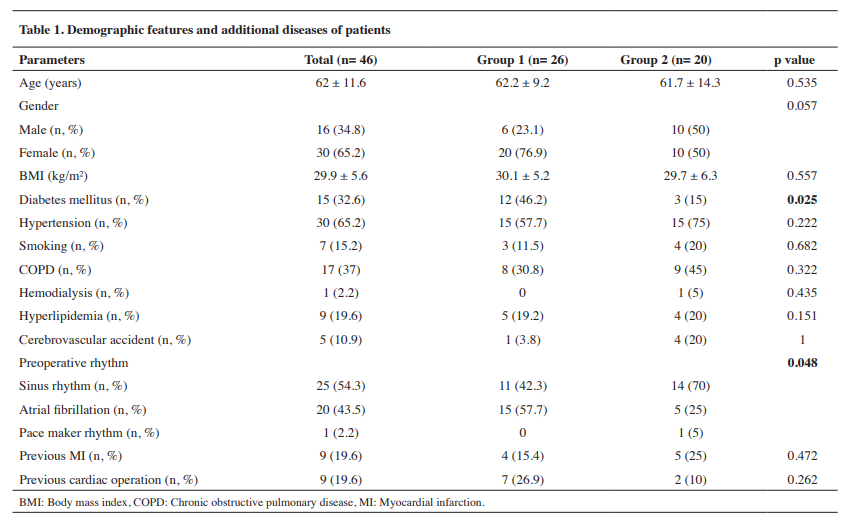 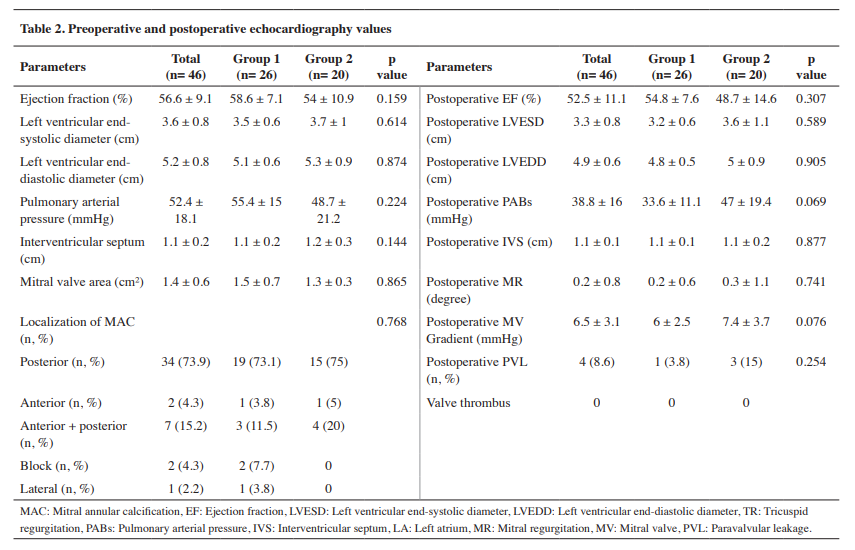 Table 3. Operative data of the patients
×

The amount of drainage was found to be significantly lower for both day 0 drainage and total drainage volumes in Group 1 (p= 0.011 and p< 0.001, respectively). Furthermore, the patients in Group 1 required less erythrocyte suspension, whole blood, fresh frozen plasma, and platelet suspension in the postoperative period. The difference between the groups was statistically significant (Table 4). 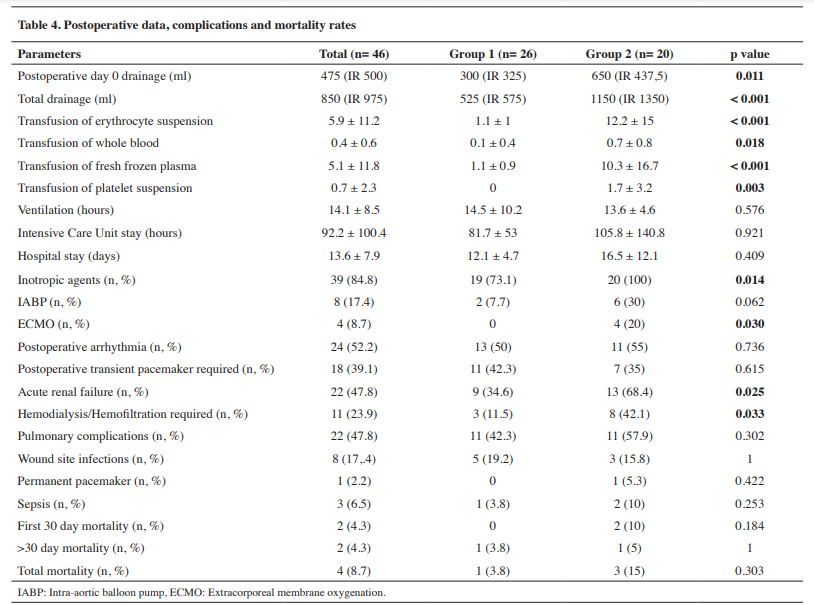 After 3 and 9 months the operation, two-dimensional transthoracic echocardiography data showed that mean ejection fraction 52.5 ± 11.1%, left ventricular end systolic diameter was 3.3 ± 0.8 cm, left ventricular end diastolic diameter was 4.9 ± 0.6 cm, pulmonary artery pressure during rest was 38.8 ± 16 mmHg. Postoperative PVL was detected in 4 (8.6%) patients and there was no difference statistically between the two groups (Table 2).

Mitral annular calcification may prevent the proper placement of the sutures and the prosthetic valve to fit into the annulus and it may further increase the risk of paravalvular leakage and valve dehiscence. This is a different study in terms of evaluating patients with MAC undergoing MVR in our clinic. Unlike other studies, we compared patients with MAC among themselves in this study. As a result of the research, the patients with MAC undergoing MVR + tricuspid valve intervention + additional surgical procedure were found to have significantly longer cross-clamp time and CPB time compared to the other group. In this group, the amount of drainage, blood product transfusion, ECMO and inotropic agent requirement, AKI, and hemodialysis/hemofiltration requirement were significantly higher in the postoperative period. There is no difference in paravalvular leak rates between the two groups.

In the presence of MAC, the frequency of atrial fibrillation (AF) increases in the normal population. MAC increases the risk of AF by expanding the left atrium, interrupting interatrial and intraatrial conduction pathways and causing defects in the conduction system(6,7). The number of patients with preoperative AF in Group 1 was significantly higher than Group 2. In a study by Ben-Avi et al., the rate of preoperative AF was reported to be 14% in patients who were positive for MAC and underwent MVR, while we found it 43% in this workout(8).

We showed that the MAC rate was 5.7% among all patients who underwent MVR. In a study by Fusini et al., 24% of patients undergoing mitral valve surgery were reported to have MAC(9).

Mitral annular calcification can also cause mitral stenosis. Surgical treatment is still the gold standard since these patients are not suitable for percutaneous mitral balloon valvotomy and transcatheter implantable valve technologies developing in recent years are still on trial. Moreover, MAC has also been found to be associated with atherosclerosis and increased cardiovascular risk factors(10). Considering all these factors together, surgical risk increases due to the increase of additional risk factors and complications such as paravalvular leakage, atrioventricular groove separation and embolization of calcium deposits in the presence of MAC. Complete decalcification of the mitral annulus takes time. It may disrupt the structural integrity of the heart, as well as increase the possibility of damage to the circumflex artery and separation of the left ventricle. On the other hand, mild decalcification and annular reconstruction techniques can be used to reduce the possibility of paravalvular leakage in the following periods in patients with MAC who will undergo mitral valve surgery. There is no consensus yet on how much decalcification should be done. In a recent study that the calcification was completely removed and then, annular reconstruction using a pericardial patch followed by supra-annular mitral valve replacement or mitral ring annuloplasty was performed, it was reported that the operative mortality (there was no mortality within 30 days, in-hospital mortality rate was 6.6%) and morbidity rates were acceptable and the mid-term outcomes were favorable(11). In the present study, it was found that the annulus corresponding to the P3 segment was supported by Teflon felts in one patient and the posterior annulus was strengthened with a pericardial patch for another one. Other patients underwent varying degrees of decalcification and standard MVR.

The localization and amount of MAC also affect mitral valve surgery outcomes. Localization is mostly in the posterior annulus. We couldn’t find the information about the amount of MAC in the Echo data; therefore, evaluation could only be made for localization. Posterior MAC was detected in 73.9% of the patients whereas anterior and posterior MAC and blockshaped MAC in 15.2% and 4.3%, respectively. There was no statistically significant difference between mortality rates according to MAC localization. In another work by Saran N et al., it has been reported that 80% of patients had posterior, 54% had commissural, 31% had anterior and 20% had block-type MAC(12). In some studies, calcification has been classified as mild if it is 1-4 mm and as severe if it is greater than 4 mm. Fox et al. showed that in which patients with MAC were followed for up to 16 years, they reported that each 1-mm increase in MAC increased the risk of cardiovascular diseases by 9%, deaths due to cardiovascular diseases by 12%, and all-cause mortality by 9%(13).

In another workout in which MVR was performed without a pericardial patch, MVR was accomplished by leaving the left atrial wall between the prosthetic valve ring and calcified annulus; and the in-hospital mortality rate was reported to be 28%(15). The outcomes obtained from different surgical procedures are different and there is a need for further studies to determine the most suitable surgical procedure for MAC.

The most important limitation of our study is the decrease in the strength of the statistical values obtained due to the low number of patients. Furthermore, the number of cases has differed between the groups since it is a single-center retrospective study. The preoperative and postoperative functional capacities of the patients could not be compared because of the retrospective nature of the research.

The presence of MAC makes the mitral valve surgery challenging and increases the risk of complications in the postoperative period. Surgical interventions to be practiced in addition to MVR in patients who have MAC, increase crossclamp and CPB time. Furthermore, the amount of postoperative drainage, blood product transfusion, ECMO and inotropic requirement in the postoperative period, AKI incidence and hemodialysis/hemofiltration requirement are higher in these patients. We found that additional surgical procedures did not affect paravalvular leak rates among the patients with MAC.

There is a need for detailed and extensive studies with a larger population. Moreover, the patients with MAC scheduled for MVR should be carefully evaluated in the preoperative period, localization, size, and spread of MAC should be investigated and imaging methods should be used if necessary, and the most appropriate surgical procedure should be decided accordingly. Although there are many studies for the most appropriate surgical procedure, a patient-based decisionmaking process can be considered as the most correct option.

Table 3. Operative data of the patients
×