Patients and Methods: This retrospective study analysed 409 patients who had undergone MVR with or without concomitant TAP, from January 2015 through May 2020. Patients were divided into two groups (the isolated MVR group and the MVR plus TAP group). The two groups were compared according to whether PPI was present or not.

Conclusion: When isolated MVR is considered and if the patient also has tricuspid regurgitation (TR), it is apparent that TAP will be inevitable, because TR inflicts a considerable burden on the patient’s quality of life. Recent studies reported varying frequencies of PPI after TAP accompanying left valve surgery. The present study observed no increase in the use of PPI after MVR accompanied by TAP as compared with isolated MVR.

Permanent pacemaker implantation (PPI) is performed with frequencies of 5.6% and 7.9% after dual and triple valve replacements, respectively, leading to an increased risk of PPI requirement, as the number of valves replaced rises. Following valve surgeries, temporary pacemaker (TPA) is usually required(1). PPI does not frequently appear to be necessary, which is 5% after cardiac surgery(2-5). PPI is associated with a long period of mechanical ventilation, intensive care unit (ICU) stay and hospital stay(2-4). Older age (> 60 years of age), male sex, emergency surgery and comorbidities such as diabetes mellitus (DM), heart failure and kidney injury were independent predictors for PPI(1).

PPI is more frequent following multiple valve surgeries(1,6). Anterior mitral valve leaflet and septal tricuspid valve leaflet are in close proximity to the conduction systems, which can be damaged by surgical trauma(1,7).

This retrospective study analysed 409 patients who had undergone MVR with or without concomitant TAP at the same centre, from January 2015 through May 2020. The data were retrieved from follow-up files and hospital records. A total of 409 consecutive patients who electively had undergone isolated MVR or MVR plus TAP were included into the study, being divided into two groups (the isolated MVR group n= 212 patients; and the MVR plus TAP group n= 197 patients). Additionally, the two groups were compared according to whether PPI was present or not.

The data included the demographics characteristics and past clinical history, types of surgery and specifics, pre- and post- operative electrocardiographic (ECG) features. Additionally, we followed up the patients who had PPI following surgery up to five years.

All patients underwent echocardiographic examination before and after the operation. The echocardiographic findings were evaluated by echocardiographic cardiologists. Mitral valve pathologies were assessed with respect to etiology (rheumatic or degenerative etiology). Tricuspid regurgitation was evaluated with color Doppler imaging to assess jet area by using parasternal short axis view, the right ventricular inflow view, and the apical four chamber view.

All patients were observed by echocardiographic examination, evaluation of ECG features, valve functions and the requirement of PPI in the postoperative period. The two groups were compared with respect to post-operative findings and long-term survival rates.

All surgeries were performed using aortic arterial and bi-caval venous cannulations for cardiopulmonary bypass (CPB). Myocardial protection with mild hypothermia was achieved by intermittent antegrade cardioplegia and/or retrograde cardioplegia. While the mechanical prosthetic valve was the most commonly used material as the artificial valve, biological prosthetic valve replacement was performed in elderly patients or women considering pregnancy. Tricuspid annuloplasty was performed through the right atriotomy. The choice of the technique for TAP was left to the surgeons. When the ring annuloplasty was planned for tricuspid valve repair we used a 3D rigid tricuspid ring for all patients. During the postoperative period, warfarin was recommended as a life-long oral anticoagulant treatment to all patients with a mechanical prosthetic valve.

Due to the inability of randomization with regard to tricuspid valve intervention, a propensity score (PS) was generated for each patient from a multivariable logistic regression model based on preoperative and intraoperative covariates as independent variables with isolated MVR versus MVR via TAP as a binary dependent variable. Covariates included in the PS model were age, gender, DM, hypertension, chronic obstructive pulmonary disease, chronic kidney disease, severe pulmonary hypertension (PABs > 55 mmHg), LV dysfunction (ejection fraction < 45%) preoperative medications (beta-blockers, calcium canal blockers, digoxin, other antiarrhythmics) usage, etiology (degenerative, rheumatic, functional), mitral valve pathology (stenosis, regurgitation, mixt), pre-existing rhythm disturbance (atrial fibrillation or any other conduction disorders), and prosthetic valve type. Pairs of patients were derived nearest neighbour 1:1 matching with a calliper of a width of 0.2 SD of the logit of the PS. The quality of the match was assessed by comparing selected variables in PS-matched patients using the standardized mean difference, for this, an absolute standardized mean difference greater than 10% is proposed to represent a significant covariate imbalance. Matching was performed using the “MatchIt” package, and covariate balance was assessed using “cobalt”, balance improvements presented using the “love.plot” command. Categorical variables were presented as counts and frequencies; continuous variables as mean (Standard deviation, SD) or median (Interquartile range, IQR) as appropriate. The Chi-square test or the Fisher’s exact test was used for comparison between categorical variables. The Student t-test or Mann-Whitney U test was used to compare continuous variables. A two-tailed p value of 0.05 was considered statistically significant. R Statistical Software (version 3.6.3; R Foundation for Statistical Computing, Vienna, Austria) was used for all statistical analysis(8-10). 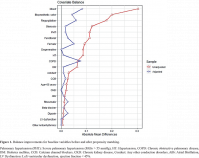 Figure 1. Balance improvements for baseline variables before and after propensity matching.
× 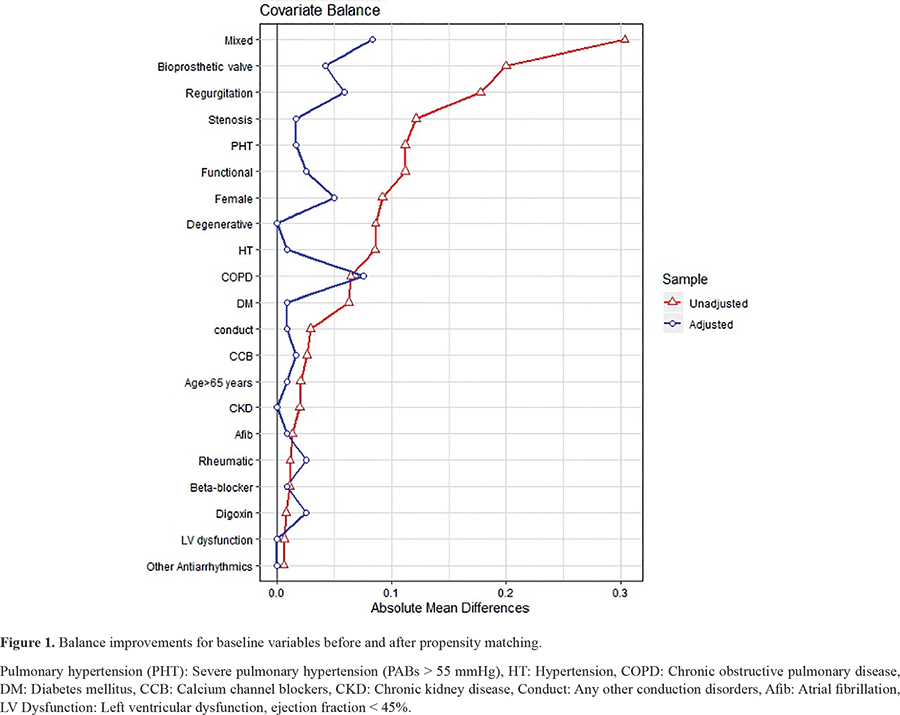 The two groups were comparable for all pre-treatment variables after being matched. Table 1 shows the variables of the patients. 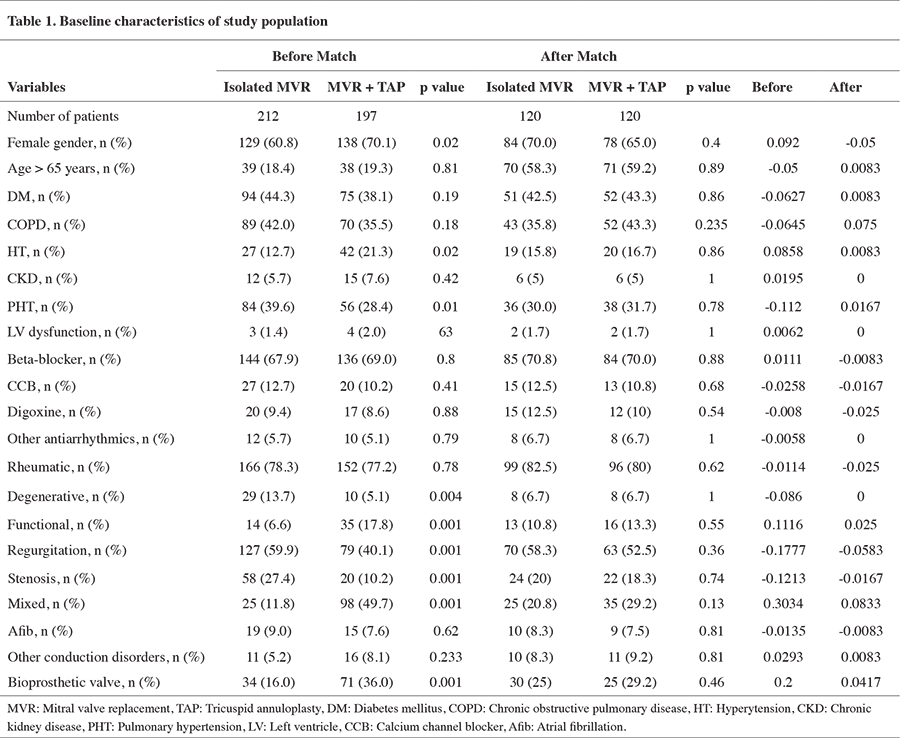 Table 2. Postoperative PPI and TPM requirements according to the type of operation in the overall study cohort and PS-matched population
×

PPI was implanted in 6 of 8 patients due to a complete AV block. The time to median implantation was 7 days [minimum postoperative days (POD) 5, maximum POD 45]. The PPI and TPM data are presented in Table 3. 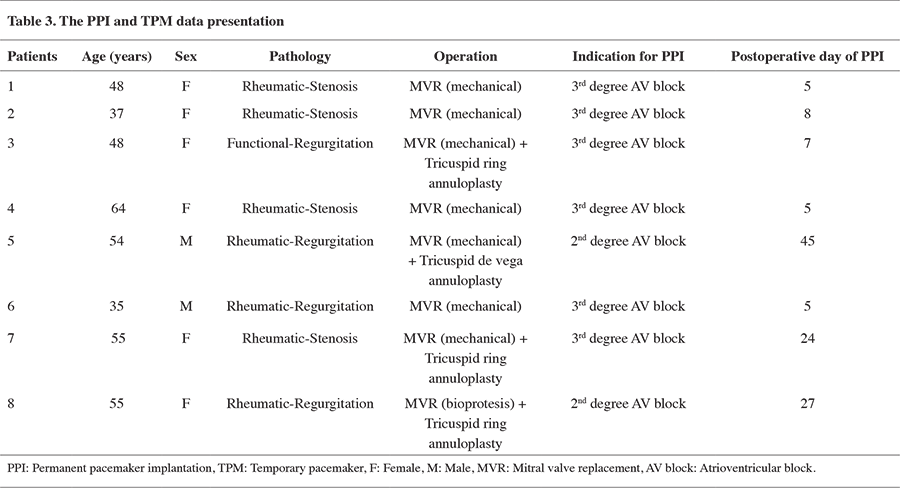 PPI requirement following heart operation is associated with increased rate of morbidity, longer hospital stay and higher costs(1,11). We examined whether concomitant TAP increases the frequency for PPI following MVR. Functional MR, mixed mitral disease, the use of bio-prosthetic valve and the number of female patients were higher in the MVR plus TAP group. The frequency of postoperative PPI was 2% and there were no difference between the groups with respect to etiology. Of eight patients who underwent PPI, six had a complete AV block. The two groups showed no statistically significant difference with respect to PPI. Moreover, patients in the two groups who underwent PPI showed no difference with respect to etiology.

Several studies reported that female gender and older age (> 75 years) were predictive risk factors for PPI(16-18). However, some studies showed no difference in the frequency of PPI in two sexes, which is consistent with our findings(18). The preoperative arrhythmia, conduction disturbances and chronic comorbidities were linked to an elevated risk for PPI, which occurred within 30 days after operation(19). We found that advanced age (> 65 years of age) and gender showed no difference between the two groups.

Several studies reported that preoperative conduction disorders such as right or left bundle branch block and first- degree AV block or left anterior fascicular block warranted PPI(11,17). The presence of bradycardia further increases the risk for PPI(20,21). Of eight patients who underwent PPI, six had a complete AV block in this study.

Operative trauma to conduction system has been shown to bring about PPI, posing a risk factor for conduction disorders associated with AV node(20-23). Following aortic, mitral and tricuspid valve surgeries, PPI are more widely mandated(5,24). Ghamdi et al. showed that prolonged CBP and cross-clamping time raised the risk for PPI(18). Chronic kidney disease was linked to conduction disturbances and atrial fibrillation based on pathological myocardial remodelling and fibrosis(25,26). Jouan et al. showed that prolonged cross clamping time and TAP were independent predictors for conduction disorders, unlike our findings(15). PPI was an increased risk factor for mitral valve surgery with concomitant TAP different from our findings. The frequency of PPI was higher in tricuspid valve replacement than in aortic and mitral valve replacements(12,27).

The European Society of Cardiology guideline recommends an observation of seven days for AV block and from five days to several weeks for sinoatrial dysfunction after cardiac surgery prior to PPI(28,29). Permanent pacemaker was reported to be implanted at day five postoperatively after valve surgery(28). However, Jouan et al. recommended that, prior to performing PPI, patients should be observed up to 14 days following mitral valve surgery with TAP(15). In this study, PPI was implanted, on overage, on the 7th postoperative day (ranging from 5 to 45 days postoperatively). In early postoperative period TPM was warranted in 23% of patients. However, after postoperative seven days, PPI was required in 2% of patients, of whom fourwere in the isolated MVR group and four in the MVR plus TAP group. The two group did not differ with respect to PPI.

Jouan et al. showed that requirement for PPI was enhanced after concomitant TAP, different from our results(15). Jokinen and collogues followed up 136 consecutive patients undergoing tricuspid valve operations for nearly eight years and they reported that PPI may prevent from fatal bradyarrhythmia following tricuspid surgery in the long term follow-up. However, PPI appears to have a risk for endocarditis and thromboembolic complications(14). Several studies examined TAP with left sided valve surgeries and found that concomitant TAP with left sided surgeries did not increase the incidence of PPI or other morbidities such as bleeding, low cardiac output syndrome and kidney diseases(30,31). We found no difference in the frequency of PPI between the two groups. It is vital to protect patients from adverse effects of late TR, because it is known that elevated TR is associated with increased morbidity and mortality following mitral valve surgery(32,33).

When isolated MVR is considered and if the patient also has TR, it is apparent that TAP would be inevitable, because TR inflicts a considerable burden on the patient’s quality of life. Recent studies reported varying frequencies of PPI after TAP accompanying left valve surgery. This study did not observe an increased use of PPI after MVR operations accompanied by TAP as compared with isolated MVR operations.

There are many limitations in this study because, it has a retrospective design and included observational data from a single-center with a relatively small cohort and short follow up period. Further prospective and multi-center studies are needed to clarify the frequency for PPI following MVR plus TAP.

Figure 1. Balance improvements for baseline variables before and after propensity matching.
×

Table 2. Postoperative PPI and TPM requirements according to the type of operation in the overall study cohort and PS-matched population
×